What is known so far about the fighting suggests that Baku is focusing on two particular districts, Fuzuli and Jabrayil. 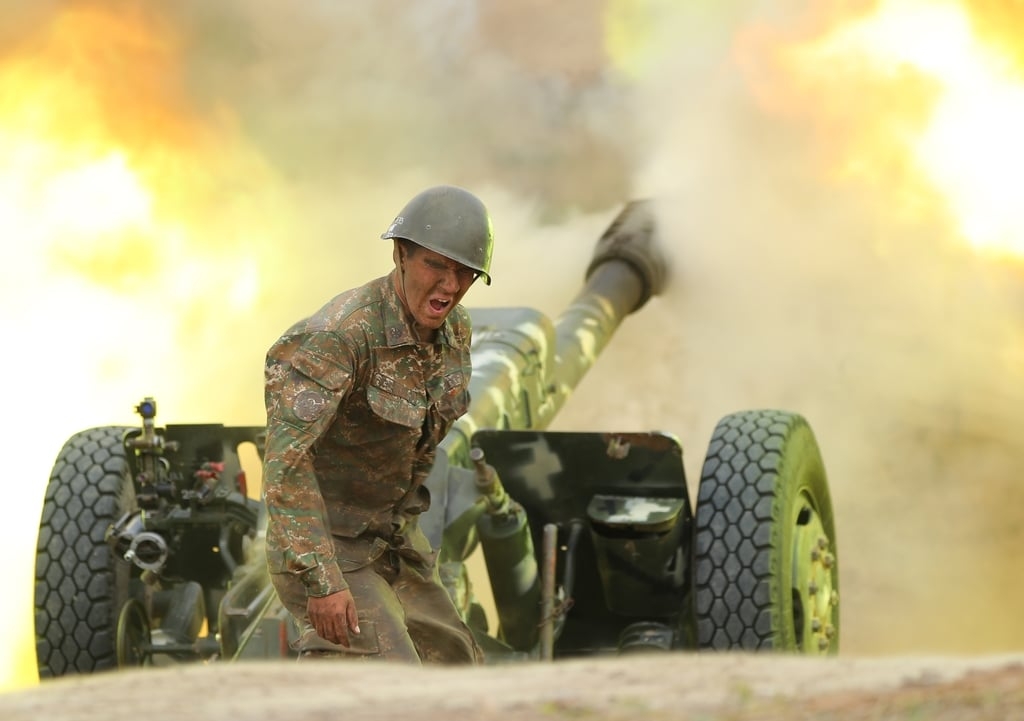 A photo released by the Armenian Defense Ministry on September 29.

The Azerbaijani offensive against Armenian forces is its most ambitious since the war between the two sides formally ended in 1994. But what, precisely, is the aim of the operation?

Azerbaijani officials haven’t said precisely what their strategic goal is in this round of fighting, but the scale of the offensive suggests that it is more ambitious than previous escalations.

Azerbaijani analysts say that the aim this time may be the recapture of one or two of the territories surrounding Nagorno-Karabakh that Armenian forces took during the war three decades ago.

“I assume that Azerbaijan intends at least to retake control in Fuzuli and Jabrayil; [those are] the two main priorities for this campaign,” said Fuad Shahbaz, an Azerbaijani analyst, in an email interview with Eurasianet.

Those two territories are on the southeastern edge of the Azerbaijani territory that Armenia occupies, and they have seen the heaviest fighting since the new offensive began on the morning of September 27. That day, the Azerbaijan Ministry of Defense announced that it had retaken several villages in the Fuzuli and Jabrayil districts.

In the morning of September 29, the MoD issued a release saying that its troops were undertaking an operation to “liberate” Fuzuli, the town that had been the capital of the district of the same name.

“Our heroic soldiers destroyed four more tanks of the Armenian troops in the Fuzuli-Jabrayil direction of the front. Currently, the combat operation is ongoing," the MoD said.

While the core of the conflict between the two sides is the territory of Nagorno-Karabakh, Fuzuli and Jabrayil are two of the seven districts surrounding Karabakh that Armenian forces occupy as well. Those districts, which were almost entirely populated by ethnic Azerbaijanis before the war, were home to the large majority of the more than 600,000 Azerbaijanis displaced in the conflict.

While there has been some modest settlement by Armenians into some of the occupied territories, Fuzuli and Jabrayil remain nearly entirely unpopulated.

Those two areas “had been largely left settlement-free, possibly due in part to pressure from Yerevan, which sought to leave itself the option of a peace deal that would return those areas to Baku’s control,” the International Crisis Group wrote in a report in December 2019. But it said that the de facto authorities in Nagorno-Karabakh planned to start developing those areas, in particular for agriculture.

“Increasing demand for land, however, has made de facto officials and the Nagorno-Karabakh population more determined to maintain control of those areas,” the report continued. “Even those who once saw the territory as subject to a bargain now want to hold on to it. Settlers have cultivated unsettled land along all major roads in the territories, up to the rear positions of Armenian troops along the line of contact with Azerbaijani forces. Areas near the Araks River on the Iranian border have proven particularly promising for farming.”

Both sides have been issuing claims and counterclaims with such abandon that it is difficult to gather even a general picture of the military progress of the fighting so far.

But by all accounts, the fighting has taken place in many places along the front lines separating Armenian and Azerbaijani forces. Azerbaijan claims to have taken some other territory during the fighting, including in the Agdere region (which Armenians call Martakert) and the Murovdag peak, in the Kelbajar district in the far north of the line of contact.

The Azerbaijani forces are focusing in particular on Fuzuli and Jabrayil, however, because those represent easier, flatter terrain than other parts of the line of contact, Shahbaz said. “The operation started in that direction first, and in comparison it is a little bit easier (geographically) to retake control there compared to mountainous Kelbajar, or Agdere,” he said.

Emil Sanamyan, an analyst with the USC Institute for Armenian Studies, agreed. Fuzuli and Jabrayil are “the most vulnerable in terms of geography, so ‘easiest’ of all the defenses to overcome,” he wrote in a tweet.

During the 2016 “April War,” until now the most serious fighting between the two sides, the clashes were concentrated in many of the same places they are now. Azerbaijani forces briefly took one village in the Agdere/Martakert region, Talish, before Armenians managed to retake it several days later. But the Azerbaijanis maintained control of a strategic height over the village.

Azerbaijanis also took a height over another village in the Jabrayil region, Jojug Marjanli. Azerbaijan subsequently resettled that village with great fanfare, presenting it as a preview of the eventual return of all the displaced Azerbaijanis to their former homes.

But this time, Azerbaijan seems to be aiming for something more ambitious. “Azerbaijan’s goal in this operation is not political, but military,” wrote Hrant Mikaelian, an Armenian analyst in a September 29 blog post about the fighting.

“I believe this time it will be large scale operation,” said Farid Shafiyev, the head of an Azerbaijani government-affiliated think tank, Center of Analysis of International Relations, in an interview with Eurasianet. “Armenia abandoned the Madrid Principles [the framework of the diplomatic talks between the two sides],” he continued. “There is not much prospect for negotiation.”

Meanwhile, the scale of the fighting appeared to accelerate. A spokesperson from the Armenian MoD said in a September 29 tweet that because Azerbaijan was using heavy weaponry, “Armenian [armed forces] are compelled to use pieces of equipment and munitions designed to engage wide area targets, intended for large and indiscriminate destruction of manpower, and static and mobile property alike.”

Armenia has announced 84 killed. Azerbaijan has not announced any numbers of military casualties but says 12 civilians have been killed.