As Georgia imagines its European future, it looks at its past

The country’s pro-Europe elite sees a millennia-old history of belonging to Europe. Will it matter for Georgia’s EU aspirations? 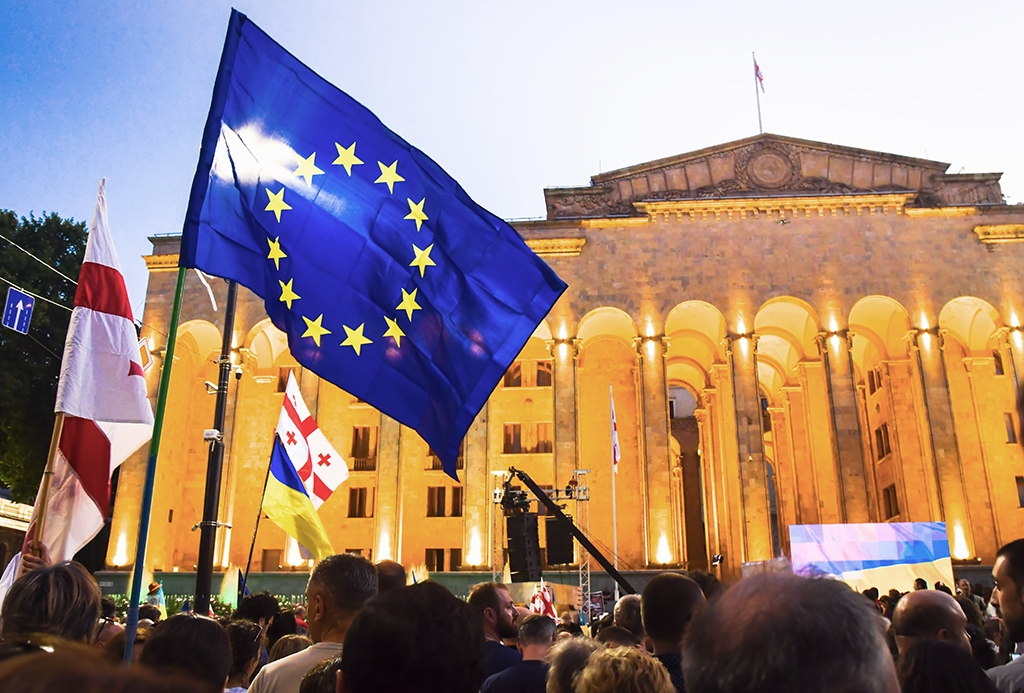 A rally outside parliament in Tbilisi (Shutterstock)

In 1918, the Democratic Republic of Georgia – having just won independence from the Russian Empire and now threatened by Bolsheviks – was desperate for allies.

To one of Georgia’s leading writers of the time, Mikheil Javakhishvili, the answer was simple: “Do we choose north, west or east? All the debate and discussion on this matter is barren, if harmful,” he wrote. “We ought to turn the same direction that the country is rolling, and it goes barreling toward the west.”

Of course, that’s not how things turned out. Soon the Bolsheviks took over and Georgia’s fate was again tied to Russia.

Now, more than a century later, Georgians are again looking west. The European Union has promised Georgia status as a formal candidate for membership, as long as it dots some democratic i’s and crosses some t’s. The country’s entire intellectual elite and the vast majority of its population favor accession to the EU.

But again today, there are obstacles along Georgia’s road to Europe: this time not only a Russia that jealously guards its regional dominance, but also its own government with murky interests and apparently mixed minds about the merits of joining Europe.

“The twentieth century was bookended by creation of two Georgian democracies and both of them tried to become European countries,” Lasha Bugadze, a prominent playwright and ardent supporter of European integration, told Eurasianet. “We need to make sure that this time it works.”

To pro-Western Georgians, Europe is their natural home, from which fate has blocked them for centuries. “We have never been so close to achieving the aspiration that is steeped in the battles and sacrifices of many generations,” wrote activists from an organization promoting Georgia’s EU membership. The group has mounted pro-EU rallies framing Georgia’s potential EU accession as a “homecoming.”

To ram home this narrative to the broader public, activists and scholars rely on a particular, Europe-centric interpretation of Georgia’s long history. This can include everything from the region’s role in the migration of early humans from Africa to Europe – 1.8 million-year-old remains found in Georgia are touted as “the first Europeans” – to ties with ancient Greece, the early adoption of Christianity, and later sporadic diplomatic efforts wooing Europe’s great powers.

“We always looked west,” said writer Grigol Robakidze in 1920, when the first Georgian republic was still alive. But alas, he added, “our geography has been the bane of our existence.”

Geographically, as well as culturally, Georgia has traditionally been seen as a point of confluence between Europe and Asia. “Twenty-five million years ago two great land masses collided at a place we now call the intersection of Europe and Asia,” historian Charles King wrote. The resulting mountainous terrain – a “series of long accordion folds” – became known as the Caucasus.

Life in these folds was molded by the no-less-tectonic collisions of great powers – Greek, Persian, Byzantine, Ottoman, and Russian. Throughout these centuries Georgia maintained its unique national identity while riding the geopolitical waves, its aristocracy donning turbans or top hats depending on which big power held sway at the time.

The idea of “European” as an identity only emerged around the 18th century, and remains a malleable concept. But pro-Europe Georgians tell a story that emphasizes their ancient and medieval links to the continent’s dominant powers and ideologies. The most potent element of this has been Georgia’s early adoption of Christianity.

One 8th-century Georgian writer, Ioane Sabanisdze, “wrote that ‘we live at the edge of the world,’ meaning that Georgia was at the frontier of Christian Europe and was part of it,” historian and linguist Levan Gigineishvili told Eurasianet.

That narrative remains potent today. “Our historic identity is European. We have always fought for Christian values, and not just with swords, but rather our thinkers saw these values as supreme principles,” Gia Dvali, a Georgian physicist who is director of the Munich-based Max Planck Institute for Physics and an outspoken advocate for Georgia’s European integration, told news website Netgazeti.

In this telling, Georgia amounts to “a sort of Night Watch, to borrow from the Game of Thrones franchise, the protectors of the Christian realm at the far and wild reaches of the globe,” said commentator Jaba Devdariani.

By the time of the Georgian republic, the country had adopted an additional argument for its European identity: democracy. “People have reclaimed what kings had squandered – freedom – and have created a state of the people, an order of the people and governance by the people,” national leader Noe Zhordania said in a 1920 speech. “This is, gentlemen, how Georgia has presented itself to Europe and asked for its verdict.”

And when the continent’s powers moved to recognize the young republic, Zhordania gushed: “All of Europe, irrespective of party and class, told us in one voice: blessed be your birth and welcome. […] We shall live up to these blessings by becoming true Europeans.”

When Georgia gained independence from the Soviet Union in 1991, the new state again began to strive toward integration with the West, seeking to weaken its bonds to Russia and deepen them with Europe and the United States. The axiom of Zurab Zhvania, a prime minister in the early 2000s, is now regularly cited: “I am a Georgian, therefore I am European.”

One key figure in the pro-European narrative is Sulkhan-Saba Orbeliani, a Georgian aristocrat who undertook an epic diplomatic mission to the power centers of Europe in the early 18th century, seeking protection against the besieging Persian Empire. He even met French King Louis XIV in Versailles, but his entreaties were in vain. “As usual, European rulers considered Georgia to be impossibly distant,” wrote historian Peter Skinner.

Ultimately Georgia turned to Russia for protection against the Persians, and before long that protection took the form of an outright annexation. In the 19th century Tbilisi (then Tiflis) was the major outpost of the Russian empire in the Caucasus.

Alexander Dumas visited in the 1850s and described Tiflis as a safe and largely European city, featuring one of the “most charming theater halls in the world” and noblewomen attired in the latest dictates of Parisian fashion, owing to the presence of a small but dedicated army of French seamstresses and milliners.

But while Russian annexation brought modernization, security and a window to Europe to a Georgia battered by Persian invasions, the Russians also deposed the Georgian monarchy, scattered some of the Georgian aristocracy and co-opted the rest, and engaged in a policy of cultural assimilation.

The second half of the 19th century saw the beginning of a national awakening that came in the form of literary polemics, a mordant exchange of wits known as the War of Fathers and Sons. Writers debated the modernization of the Georgian language, promoted the spread of literacy in Georgian, and criticized Georgians’ complacency in the gilded cage of Russian imperialism.

“It was a relatively liberal, vegetarian if you will, phase for the Russian empire, and this allowed cultural elites to push for writing books and teaching classes in Georgian, to essentially create cultural autonomy within the empire,” Bugadze told Eurasianet.

The central figure in all this, iconic writer and thinker Ilia Chavchavadze, was a sharp critic of Russian imperialism but also saw Russia as a source for security, European-style enlightenment and progress for Georgia.

The next generation of Georgian intellectuals and public figures, however, increasingly looked past Russia and directly to Europe for a model for nation-building and progress. “Today Georgia’s path goes not through Moscow and Petrograd, but rather cuts across the Black Sea and travels along the Danube Delta,” Javakhishvili wrote.

Cultural and historic reasoning aside, the case for European integration is today again based on a hunger for progress, stability and welfare – everything that EU citizens take for granted, advocates say.

“Being able to plan for 10 years ahead, feeling secure for the life paths of your children and your own safe retirement – those are great, very human things,” Devdariani said, describing what he expects Georgians to get by joining the EU. “So is the confidence in being free from arbitrary persecution and bureaucratic abuse.”

A 2021 opinion poll from the Caucasus Research Resource Center showed that Georgians’ support for EU membership is based more than anything else on economic reasoning. Almost half of respondents said that membership would improve the country’s economic situation.

For the country’s liberal intelligentsia however, Europe is a marker of liberal values, democracy, and human rights.

The process of European integration has indeed already served as a powerful impetus for political reforms. Free trade and visa-free travel deals with the EU, reached over the last decade, were the carrots enticing the government to enact the liberalizing reforms that Europe demanded on reducing corruption, improving democratic governance, and protecting human rights.

But the same process has also rankled the other, conservative part of Georgian society, which looks askance at rights for minorities – especially sexual minorities – and opposes the separation of church and state.

Conservative, and especially far-right, Georgians oppose membership in the EU for many of the same reasons liberal Georgians support it. The fight for public acceptance of LGBTQ Georgians has emerged as a pivotal battleground, and it is deeply tied in with Georgia’s European identity.

In 2013, just before Tbilisi signed landmark association and free trade agreements with the EU, the bloc’s then-commissioner for enlargement Štefan Füle had to assure the leadership of the Georgian Orthodox Church that the accords did not contain any fine print mandating the legalization of gay marriage. The association agreement, which was aimed at harmonizing Georgia’s legislation with that of the EU, did require the elimination of any form of discrimination and resulted in Georgia passing a broad anti-discrimination law.

LGBTQ Georgians are still struggling to claim their rights and European diplomats are openly supporting their struggle, much to the chagrin of right-wing groups. Recently, homophobic groups have taken to burning EU flags in protest.

Georgia’s European future is now uncertain. The country suffered a setback in June when the EU granted membership candidate status to fellow applicants Ukraine and Moldova, but requested Georgia to fulfill a number of political conditions before it could get the same.

The government has responded erratically, promising to carry out the requested reforms but then also launching unprecedented attacks and conspiracy theories against EU and American officials.

“Today’s context is obviously different than a century ago, but history savants can’t help but feel anxious that another historic chance could be squandered,” Bugadze said.

He added that today the question of being European or not is essentially a question of what kind of a system and society Georgia wants to be. “The EU basically asked us to state clearly where we are and who we are before we can take our relations to the next stage,” he said. “This question needs to be answered not just for Europe’s, but for our own sake.”