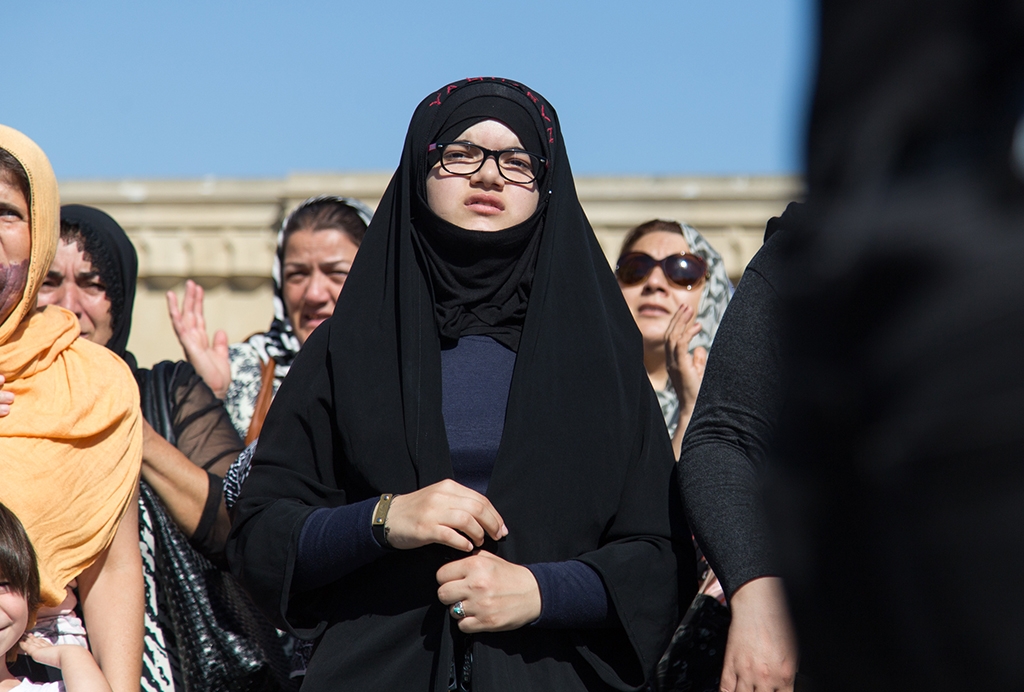 Azerbaijan’s constitution ensures the freedom to practice religion, albeit with many caveats. (photo: Ehtiram Jabi)

Sevda Kamilova graduated university with a linguistics degree, expecting that her English skills would bring opportunities for high-paying jobs in Azerbaijan’s hospitality industry. She interviewed with several international companies, but each time was asked if she would be willing to remove her headscarf for the job. She declined, and didn’t find a job.

“These companies don’t want to be represented by a woman with a hijab,” she told Eurasianet. Now she works for her family’s company, where she continues to wear the Islamic headscarf. “My faith is important to me, and I don’t want to take it off for a job,” Kamilova said.

While 97 percent of Azerbaijanis identify as Muslim, the number who actively practice the faith is much smaller and the country is proud of its secular tradition. But since the collapse of the Soviet Union, religious observance has grown. While no one keeps statistics on the issue, a noticeable increase of women wearing hijab has become a hot topic among Azerbaijanis. Along with that, hijab wearers say, has come a backlash.

“Now, people can practice their religion freely, and those who want to cover themselves have the option to do so,” Sadagat, the owner of an Islamic clothing store in Sumgayit, told Eurasianet. But she said that social pressure, related to a general perception linking the hijab with extremism, remains. “Some women end up taking off the hijab, just to avoid extra attention in public,” she said.

The proprietor of another Islamic clothing company, in Baku, said many covered women have come to his shop to apply for jobs because they have experienced discrimination elsewhere. “They can’t find jobs anywhere, so they apply for a job in a store that sells hijabs,” he told Eurasianet.

Azerbaijan’s constitution ensures the freedom to practice religion, albeit with many caveats. “Religious rituals may be freely performed if they do not disturb public order and are not contrary to public morals,” reads Article 48.

The law doesn’t explicitly address the issue of hijab in the workplace, but there is an unofficial ban on wearing it in a government job, said Aynur Veyselova, a senior advisor at the State Committee on Family, Women and Children’s Affairs. “Azerbaijan is a secular country and our constitution is based on secular values,” she told Eurasianet. “For example, in Turkey there are laws that women in hijabs can even work in government institutions, however we don’t have that here."

Girls are also informally forbidden from wearing the hijab in schools. In 2011, religious activists organized a series of protests demanding that the government eliminate the ban, but to no avail. The ban has remained untouched.

At the same time, the Azerbaijani public remains overwhelmingly secular and wary of the hijab. Those fears have been heightened by increasing numbers of tourists from Iran and Arab countries in recent years.

″Baku is the only Muslim city in the world where there is a monument displaying a woman throwing off her chador. Everyone needs to understand the significance of this monument. To me it is one of the key symbols of our country. We should not take it for granted. We should make pilgrimages to it and understand its historical value and importance,″ Azerbaijani poet Rasim Garaja wrote in response to the rising numbers of veiled tourists in the country.

Some believers, meanwhile, quietly complain about employment discrimination against women who wear hijab. Media have recently started covering the issue.

Saida, a young woman who works at a grocery store in Baku, is allowed to wear hijab on the job. But she told the story of a friend who was forced to take off her hijab to get a job as a saleswoman. As for herself, Saida told Eurasianet that she has few problems except for “an occasional weird look” and that “some customers don’t know how to treat me, especially when they buy alcohol.”

Novella Jafarova of the Association for the Protection of Women’s Rights, a non-governmental organization, told Eurasianet that women in hijabs have the same rights as others. Asked about workplace discrimination, she replied that “we haven’t received any reports regarding this issue. If we do, we’ll raise it.”

Veyselova of the State Committee on Family also said she had never received a complaint about job discrimination related to the hijab. But Kamilova, the linguistics major, said she had not reported any of her experiences in the job interviews, believing no one would act. “Women in hijab are just a minority in society, so no one would hear us,” she said.

Austin Clayton is a writer based in Baku. Sign up for Eurasianet's free weekly newsletter.