How much compensation will they shake off the Nazarbayev family tree? 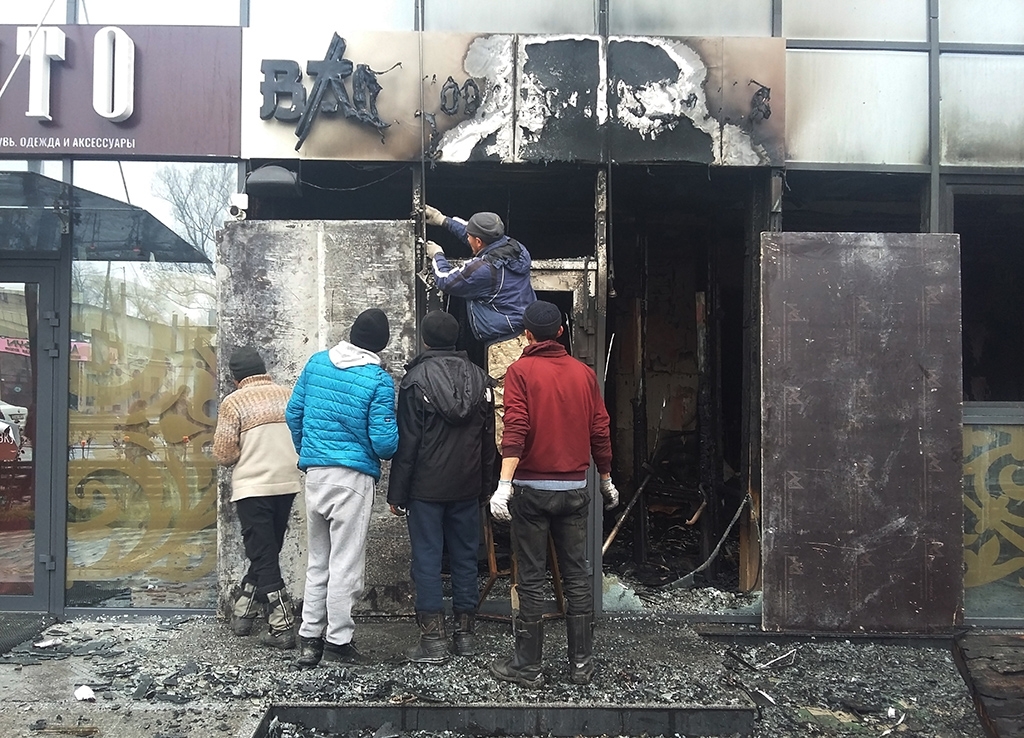 More than 1,500 businesses were damaged in Almaty. (V. Baturin/Shutterstock)

Inside the Modnik boutique in Almaty, owner Shynar Yessengaziyeva presides over broken windows and empty shelves. Looters have grabbed up what stylish clothes customers had not bought the week before amid the store’s holiday discounts.

“These are hard times,” Yessengaziyeva told Eurasianet. “First a pandemic with quarantines, now this."

She had previously seen "such horrors" only on the Internet and could not have imagined armed mobs rampaging in her hometown, as they did this month. Yessengaziyeva blames the government, which lost control of Almaty amid protests over living conditions and political marginalization on January 5.

“The protests were caused by the authorities who drove people to despair,” she said. "Why should we pay for the government's mistakes?"

Since taking back control this week with Russian military support, President Kassym-Jomart Tokayev has promised not just compensation but an end to the cronyism that has fueled widening inequality for decades. Even government critics like what they hear, but few expect the kind of systematic reset the country needs to change direction.

Tokayev has called the unrest the worst crisis in Kazakhstan’s 30 years of independence and said the crisis could cost $3 billion. The Atameken business lobby has identified more than 1,700 affected businesses in 10 regions, which it estimates suffered $220 million in damage; the majority (1,591) were in Almaty. Shymkent and Taldykorgan also saw looting.

Not all these businesses will survive. Representatives of restaurants and cafes in Almaty said at a January 10 press conference that it would take five years to restore the destroyed facilities; a third of those affected doubted they could resume work at all.

And Tokayev has not yet addressed the indirect damage caused by his government chocking the internet for almost a week. The Kazakh economy lost $400 million from the blackout, the London-based monitoring agency Top10VPN.com estimates.

Andrey Kutuzov, who trades on the American stock market using a mobile application, lost access to his portfolio during this period. “Due to the lack of the internet, I did not have the opportunity to sell shares in the technology sector on time, and they have fallen in price over these days, bringing me losses,” Kutuzov told Eurasianet. “To whom should I send the bill?”

Speaking before the lower house of parliament, the Mazhilis, on January 11, Tokayev instructed his government to create an endowment to assist those impacted by the unrest and expand the social safety net. He said this pot of money should be funded by wealthy businesspeople and pointed to the circle of extravagantly rich entrepreneurs surrounding the former president, his own mentor, Nursultan Nazarbayev.

“Thanks to the first president, the Elbasy [Nazarbayev’s bespoke title], a group of very profitable companies and a stratum of people rich even by international standards have appeared in the country,” Tokayev said. “The time has come to pay tribute to the people of Kazakhstan and help them on a systematic and regular basis.”

Time may be short. Capital flight has already begun, Tokayev said. Lawmakers swiftly ratified an agreement with the United States on tax discipline, which will allow Kazakhstan to peer into its citizens' accounts in American banks.

Members of the Nazarbayev clan, who have been lying low since unrest broke out at the start of the year, offer rich pickings. Daughter Dariga Nazarbayeva, who owns dozens of millions of dollars in London properties, did not appear for at her job as a parliamentary deputy in Nur-Sultan this week; her spokesperson said she had contracted COVID-19. The former president’s brother, who enjoys a lavish life with properties around the world, reportedly crossed into Kyrgyzstan last week en route to Dubai. Forbes estimates another daughter and her husband are each worth $2.8 billion.

This sea change in rhetoric has aroused optimism. Even Sergei Duvanov – an opposition journalist, activist and hardened skeptic – considers Tokayev's speech a sincere acknowledgment of serious mistakes and omissions over the years.

“Tokayev spoke openly about all the vices of Kazakhstan’s power system, which both the opposition and civil society long criticized,” Duvanov told Eurasianet. "The authorities are scared of the recent events and are learning lessons."

But there are also other, everyday concerns to tackle in the fallout from last week’s violence. The State Agency for Financial Supervision has banned banks from charging penalties on overdue loans until the state of emergency ends on January 19. The Agriculture Ministry has banned the export of staples such as potatoes and carrots, as well as livestock, for up to six months to prevent price increases; it has also subsidized grain prices.

Anticipating a drop in the tenge, the National Bank began selling foreign currency when trading at the local stock exchange resumed on January 12, promising to continue "until the situation is completely stabilized and confidence in the tenge is restored."

Despite these efforts, and Tokayev’s reassuring remarks, doubt is not hard to find.

Svoik believes that anything clawed back from oligarchs will provide only a temporary cash inflow. To improve life in the long term, he said, Kazakhstan must change its entire economic model from one based on resource extraction to domestic production.

He noted that Kazakhstan, despite its ample natural resources, has a negative balance of payments and should renegotiate the terms of foreign investments.

“But the government will leave everything as it is. The renewed Cabinet of Ministers is mainly made up of old officials who are incapable of progressive ideas,” Svoik said.