As Kazakhstan’s activists find their voice, next comes the message

For all the excitement evinced by their followers, the newly emerging opposition movements have no power. 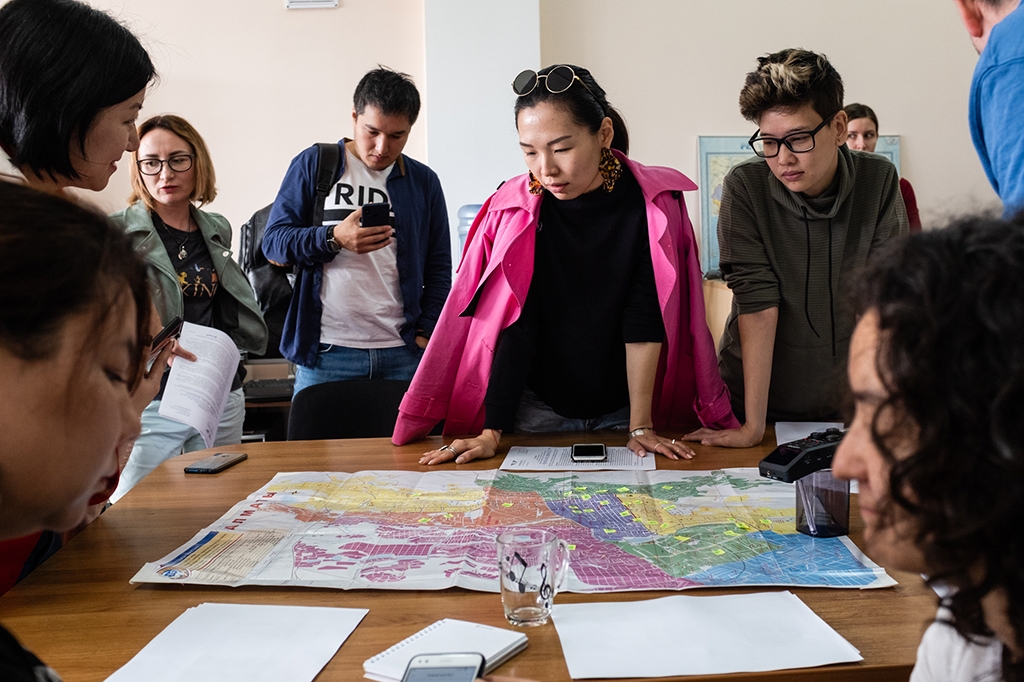 Independent observers study a map of polling stations in Almaty the day before the election. (Danil Usmanov)

Thirty-six attempts. That is all it took for one civic activist in Kazakhstan to get permission from city authorities to hold a demonstration.

Thanks to Alnur Ilyashev’s efforts, citizens and movements opposed to how the government is being run will – on June 30 – be able to state their case in an Almaty public square without running the risk of arrest.

The timing is fortuitous. Critics of the ruling order have a lot on their mind.

Oyan, Qazaqstan (Wake Up, Kazakhstan), a fledgling political movement that coalesced ahead of the much-lambasted June 9 presidential election, has so far mainly been powered by the enthusiasm of its supporters. Last week, things took a more organized turn, when they, together with an opposition-minded group called Respublika and other collectives of disgruntled citizens, set out what changes they want to see in Kazakhstan.

Speaking at a press conference in Nur-Sultan on June 19, representatives for Oyan talked about the need for root-and-branch political reforms, guarantees on the right to public assemblies and an end to internet censorship.

Respublika is the less well-known part of this team. Members demanded a review of the election that gave Kassym-Jomart Tokayev 70 percent, the acquittal of those arrested during protests that took place in the wake of that vote and the reversal of a March decision to rename the capital city from Astana to Nur-Sultan in tribute to long-serving ex-President Nursultan Nazarbayev.

For all the excitement evinced by their followers though, the likes of Oyan and Respublika have no power. Their only recourse for now is to try and throw a spanner into Tokayev’s strategy to quickly neuter grumbling among politically engaged citizens through his creation of a consensus-building forum called the National Council of Public Confidence.

Tokayev has acknowledged the existence of groups like Oyan, albeit only obliquely, and has even signaled he is prepared to be in listening mode.

"Our citizens are very concerned about the development of dialogue between government and society. Any such dialogue should be based on the recognition of a plurality of opinions," Tokayev said on June 12, after instituting his national dialogue forum.

His intended audience are not buying it.

"We have already had similar councils in the past that were created against a background of protest moods, but they solved nothing. This national council is just another attempt by the authorities to placate the people," Bella Orynbetova, a leading figure in Respublika, told Eurasianet.

Orynbetova said officials are talking out of both sides of their mouths. While Tokayev’s aide, Yerlan Karin, was talking about inviting her to participate in discussions on the formation of the council, her fellow activists were being harassed by law enforcement authorities, she said.

What is perhaps most surprising about Orynbetova’s group, Respublika, about which almost nothing was known until it joined Oyan at last week’s press conference, is that it is drawn primarily from the ranks of former civil servants.

“None of us had any intention of getting into politics, not to speak of criticizing the government. But after some things we have seen this year, we could not remain silent,” said Orynbetova, who previously managed a Kazakh-language government information portal called El.kz.

The one galvanizing moment that comes up recurrently was a house fire in the capital in February that left five small children dead. The tragedy encapsulated a whole range of things that many Kazakhs feel have gone wrong.

The children were left untended overnight because their parents were out doing menial, poorly paid work – a fact that exasperates those who feel the nation’s oil wealth should spare parents from having to resort to such extreme measures. Even near the center of Nur-Sultan, one can spot rickety death-traps inhabited by the city’s indigent. Childcare facilities are meager. On and on it goes.

“After the tragedy, we in the editorial office got the order from up high to quash negative sentiments and to talk about how the government is helping the needy. We were shocked and offended,” Orynbetova said.

It was the renaming of Astana – the very first decision adopted by Tokayev following his appointment as interim president – that spurred Respublika activists. The founding members were like-minded, Kazakh-language bloggers who joined forces to form a group that Orynbetova says now counts around 100 people – a modest number.

Other entities included in this loose coalition, beyond Oyan and Respublika, are a group called Erkindik Kanaty (Wings of Freedom) and a mothers’ association that emerged in the wake of the February fire.

If that covers a wide spectrum, it is by design. Assem Zhapisheva, a journalist and Oyan activist, told Eurasianet that she believes it will be easier to coordinate if the broader movement is numerous and draws people from disparate sections of society.

“When Nazarbayev left, people sensed that they had a chance to change their lives in Kazakhstan. We feel that our time has come,” Zhapisheva said.

Political analyst Aidos Sarym, who has dabbled in a markedly compliant strain of opposition politics in his time, is skeptical of these emergent formations and argues that their intransigence and ultimatum-driven agenda will lead nowhere.

“They are popular on the internet. But politics is a different reality,” he said. “You sense a youthful maximalism and a lack of experience in constructive dialogue among these activists. But in Kazakhstan, if you want to get something from the authorities, you need to be flexible and look for compromises.”

And yet, for those interested in politics and tired of the fixed menu, this feels like an exciting time.

Zholdasbekov is scornful of the self-styled opposition politicians of old.

“They were just people who gave themselves that title while cooperating with the authorities,” he said. “A new generation of smart, brave and principled people has come of age. And the government will have to take heed.”