As Kerry Leaves, What's Next For U.S. In Central Asia? 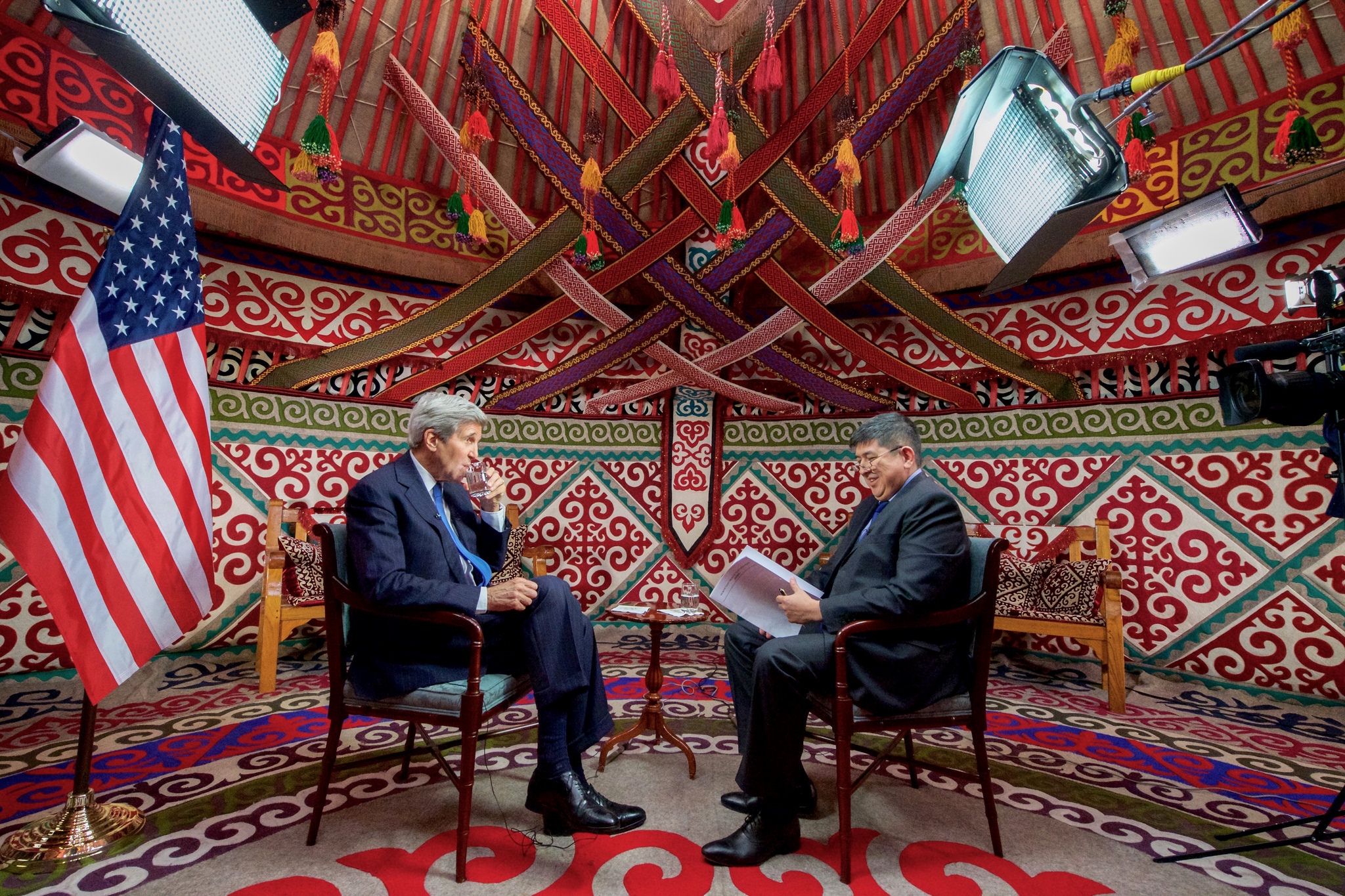 As United States Secretary of State John Kerry heads home after an unpecedented five-country tour of Central Asia, the U.S. role in the region remains more uncertain than it's been since the 1990s.

The mere fact that the trip happened was the biggest news to come out of it. It was the first time a high-ranking U.S. official had done this five-country tour that has of late become the standard for world leaders (though Japan, India, and China have all sent their presidents, rather than their top diplomat as the U.S. did).

The tour came at a time when U.S. interest in the region seems to be waning as a result of the (albeit now delayed) drawdown from Afghanistan, and so appeared to be an attempt to demonstrate that no, the U.S. isn't gone just quite yet. Also noteworthy -- throughout the entire trip Kerry barely mentioned the much-derided New Silk Road Initiative, which had been the supposed centerpiece of the State Department's post-Afghanistan Central Asia policy.

Kerry's trip also inagurated the "C5+1" format of talks, with the foreign ministers of all five Central Asian states plus the U.S. In an area with remarkably little interregional cooperation, that is actually a genuinely novel and potentially important new platform. But what might it be used for?

There was little new policy or big deals that resulted from the visit, leaving many observers to wonder what, exactly, was the point of it. The American press coverage was dominated by stories about symbolism, focusing above all on parsing Kerry's precise word choices as he spoke about the respective human rights situations of the five countries. Kerry was criticized from some quarters for his circumspection in his public remarks; most notably he didn't mention the recent ban on the Islamic Renaissance Party of Tajikistan, the most dramatic development in the region.

And in his remarks on security, probably the issue most of his interlocutors most wanted to discuss, it was unmistakeable how closely they reflected those of his host at the time. In Uzbekistan he addressed the U.S. pullout from Afghanistan, which has been a recurring theme of President Islam Karimov, as well as Karimov's great fear of radical Islamist groups. "We know that your concerns about Afghanistan are concerns that we share – the stability of Afghanistan, the willingness of all of the allies to stay the course and to help fight for that security; as well as the challenge of radical religious extremism and the challenge that every country is facing with Daesh, al-Qaida, Boko Haram, al-Shabaab, different terrorist entities that are challenging states in this part of the world."

In Tajikistan, he emphasized the border, the threat to which is a favorite theme of President Emomali Rahmon. "We recognize that Tajikistan has the unique position of having – of being a Central Asian country with the longest border with Afghanistan and that that has presented some very real security challenges," Kerry said. "And I emphasized the United States commitment to working with Tajikistan and with other countries in the region to strengthen the border security. And also, we discussed President Obama’s decision to leave additional troop levels in Afghanistan in order to contribute to regional stability."

And in Turkmenistan, which has considered it almost a slander to mention instability on the border, Kerry barely mentioned it: "And obviously, Afghanistan – you live in a very interesting region and there are a lot of concerns that we need to work on together."

Nevertheless, there doesn't seem to be any new security cooperation in the works. In a long list of new aid programs for the region that the State Department announced during the visit, there was nothing about security. (This of course doesn't include Department of Defense-run programs on training and equipping regional militaries, which has become a far larger part of U.S. military aid in the region and one which all sides are happy to keep quiet about.) Instead, the aid covered relatively modest and low-profile issues like educational exchanges and cultural preservation.

Modesty is not necessarily a bad thing. The U.S. doesn't have obvious overarching interests in the region, and big ideas haven't really borne fruit. Using the region as a transport hub for military operations in Afghanistan -- the "Northern Distribution Network" -- tended to distort American policy through that lens and made everything else subservient to keeping the supply routes moving. The New Silk Road was a failed attempt to rebrand already-existing programs and proposals as a big idea.

A slightly less public account of the trip, the transcript of a background briefing with two senior State Department officials when the trip was over, doesn't suggest there was much more going on behind the scenes (other than a comic inability to keep straight whether the conversation is about Tajikistan or Turkmenistan). But one interesting detail is that the trip was described as "initial," and the start of something more:

This was an initial trip where I think the Secretary was able to kind of create his own baseline of what some of the key issues are. The fact that the C5 met and seeks to meet again and seeks to have some ... working groups and such that can take on some of these specific issues I think creates an opportunity for us to look at maybe we can do some conversations, regional conversations on borders, on water, on economic, et cetera. These are things that are still to be worked out, but we were encouraged by the fact that all five countries seem to want to get together and continue to engage on these issues. It’s an opportunity.

If there were actual five-sided (plus the U.S.) conversations on water and border and economic issues, that might really be something. Even though there's plenty of reason for skepticism that all this will pan out, it does seem like it could be a genuine diplomatic effort -- big idea or not -- to work on something that could really help the region. Let's see.