Bad weather and a Russian export ban have set Kyrgyzstan up for another lean year. 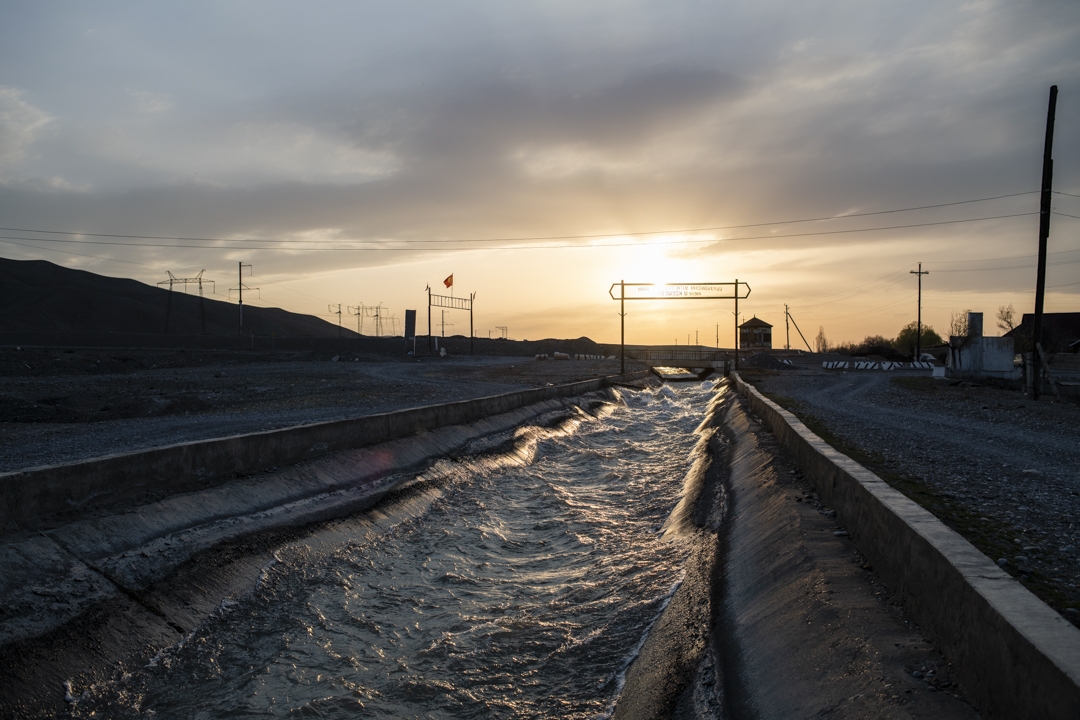 Last year farmers in southern Kyrgyzstan suffered from too little water, this year too much. (Danil Usmanov)

The secretary general of the United Nations, António Guterres, has warned that war in Ukraine is pushing countless millions in the developing world further into food insecurity.

But in Kyrgyzstan, whose farmers were tormented by drought last year, officials insist their country is safe.

Speaking to Eurasianet earlier this month, Zhigitali Zhumashev, head of the Agriculture Ministry’s crop production department, fired off a welter of figures to make his point.

More than 1.2 million hectares of arable land have been sown this year. Of that total, more than half, around 660,000 hectares, is being used to grow staple items like grain and legumes. Around 30 percent of arable land has been earmarked for fodder crops, with a smaller amount, 6.2 percent, left for other vegetables, oilseeds, cotton, beets, gourds and tobacco.

There is less optimism in the fields, though.

In the Karasuu district in Osh, the southern region where much of Kyrgyzstan’s crops are grown, farmers are complaining that their fields have been waterlogged by especially intense rainfall.

Gonijon Mirmakhmudov, a 58-year-old farmer in the rural community of Shark, leases 1 hectare of land on which he grows potatoes and other vegetables.

“The endless rain in May flowed down in a stormy stream. It destroyed my entire future harvest,” he said.

Asked about whether he expected the government to step in to help, he threw up his hands in a gesture of helplessness and disdain.

Mirmakhmudov’s household of six people has been at this tireless work in the fields, weeding, fertilizing, sowing and harvesting, for more than a decade. But this year has been bleak.

“I don’t even know how we will get out of this crisis. We will have to take out loans. I see no other way out,” he sighed, before walking away with his hoe in his hand.

Bektemir Kasymov lives in the settlement of Alga-Bas, not far away. He too grumbles that the government does little to help farmers brace themselves against the possibility of natural disasters. Officials would object to this characterization, however, and have said they are digging especially deep into the coffers this year to help the agriculture sector.

“Last year, I lost almost half of my corn crop due to a lack of irrigation water,” Kasymov said. “This year, the situation is reversed. The growing seedlings were victims not only of the rain, but also the mudflows and stones that came down from the mountains.”

These interminable headaches are prompting ever more people to give up life in the countryside and take up more secure jobs in cities, Kasymov said.

Bad harvests will only contribute to the cost-of-living squeeze that is affecting Kyrgyzstan along with the rest of the world. The UN’s Food and Agricultural Organization noted in a May 11 bulletin that food prices across the board rose in April in Kyrgyzstan by up to 28 percent compared to the same period the year before.

Domestic production is in any event only a small piece of the puzzle. Kyrgyzstan is strongly reliant on imports for even the most basic foodstuffs. Last year, wheat yields were ravaged by drought and totaled a meager 363,000 tons compared to the 629,000 tons harvested in 2020.

The usual implicit expectation is that Kyrgyzstan’s top trading partner, Russia, will step into the breach. Last year, Russia supplied 125,000 tons of wheat, closely followed by Kazakhstan, which delivered more than 94,000 tons. A sizeable chunk of the 26 billion som ($327 million) food security war chest that the Finance Ministry unveiled in April will likely be used to make such acquisitions, although there is no clarity yet about how much will be spent that way.

The war in Ukraine has weakened certainties, however.

A ripple of concern swept across Russia-aligned nations when the government in Moscow adopted a decree in mid-March banning the export of wheat, meslin, rye, barley and maize to almost all countries within the Eurasian Economic Union, or EAEU, a trading bloc of which Kyrgyzstan is a member. Under the decree, the ban was to remain in force until June 30. That decree led to an immediate rise in prices for food in Kyrgyzstan.

But Almaz Tazhybai, a political analyst, told Eurasianet that he believes that Russia will likely be willing to export grain to Kyrgyzstan in view of how complicated exporting the commodity has become as a result of the international sanctions regime. Kazakhstan will continue to be another major supplier, Tazhybai said.

“Kazakhstan not long ago delivered 100 tons of top-grade seeds of their Karabalyk-20 spring wheat variety. Everything is going according to plan so far, unless there are natural disasters, like the drought of last year,” Tazhybai said.

But if Moscow is indeed poised to drop its EAEU grain export ban, it isn’t giving any hints. Only last week, a Russian government official reiterated the case for the policy, indicating that it was intended to prevent bloc members from making a profit by re-selling the relatively cheap Russian commodity to third countries.

Even while officials talk of financial war chests and grand plans for farming, the country’s uppermost leadership is candid about the difficult times to come. In April, it was President Sadyr Japarov himself who sounded the warning.

“I am begging you to keep an eye on your expenses, to postpone any major purchases, don’t hold feasts and spend money on trifles. The main thing now is food security. This counts for the government as for families alike. Not one meter of our land must be left unsown. Every little bit counts,” he said.