As Protests Continue In Yerevan, Russia Concedes To Armenia On Soldier Murder Case 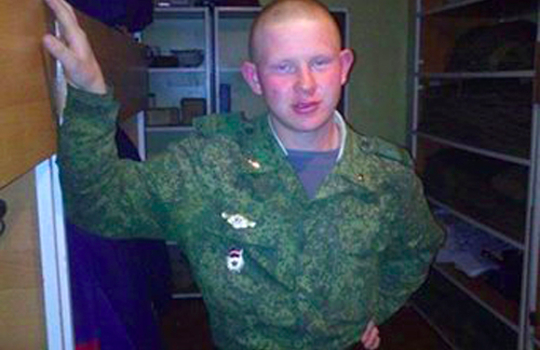 Valery Permyakov, a Russian conscript soldier suspected of killing six members of a family in Gyumri, Armenia, in a photo released by the Armenian authorities.

Russia has agreed to let Armenian courts try a Russian soldier accused of murdering seven members of an Armenian family after deserting Russia's major military base in the country. The move is a major concession by Moscow, and comes as large-scale street protests in Yerevan against Armenia's Russian-owned electricity company have been gathering strength.

The soldier, Valery Permyakov, walked off Russia's 102nd military base in Gyumri on January 12, walked into the nearby home of the Avetsiyan family and opened fire; six died immediately and a seventh, a six-month-old baby, died later in the hospital. The case outraged Armenians and led to unprecedented protests against the base.

From the beginning, Armenia and Russia have disagreed about who should be able to try Permyakov: Armenia wanted him tried in Armenian courts, while Russia wanted him to be tried by a Russian military court, albeit on Armenian soil.

On June 26, Armenian President Serzh Sargsyan met with a Russian government delegation to discuss energy fees, the issue that sparked the Yerevan protests. But the scope of the discussions was apparently wider than that, and Sargsyan's office issued a surprise announcement after the meeting:

"At the meeting ... Sargsyan took the opportunity to express appreciation to the Russian law enforcement organs, in particular to the prosecutor's office for effective cooperation with the Armenian prosecutor's office on the investigation the inhuman crime in Gyumri in January," Sargsyan's office said in a statement, news agencies reported. "The decision about the transfer of the criminal case to the Investigative Committee of Armenia and the appropriate authorities in Armenia, reflects the spirit of partnership and brotherhood and fully corresponds with the position of the Armenian-Russian agreement on the status of the Russian military base in Armenia."

On top of that, Russia also apparently agreed to give Armenia $200 million in credit for arms purchases.

Various Russian officials have been darkly warning that the protests in Armenia represent an anti-Russian, U.S.-backed "maidan," a la Ukraine, and advising Sargsyan to take a harsher stance against the protesters. But this move shows that Moscow also realizes it needs to try to assuage Armenian public opinion, which has been wounded not just by the electricity issue and the Permyakov case, but arms sales to its enemy, Azerbaijan. Will this concession be enough to tamp down the anti-Russian sentiment on the streets of Yerevan? Stay tuned.