As Russia loses its luster, Tajik laborers head to Turkey

Tajikistan’s corruption and wretched economy force many to work abroad. 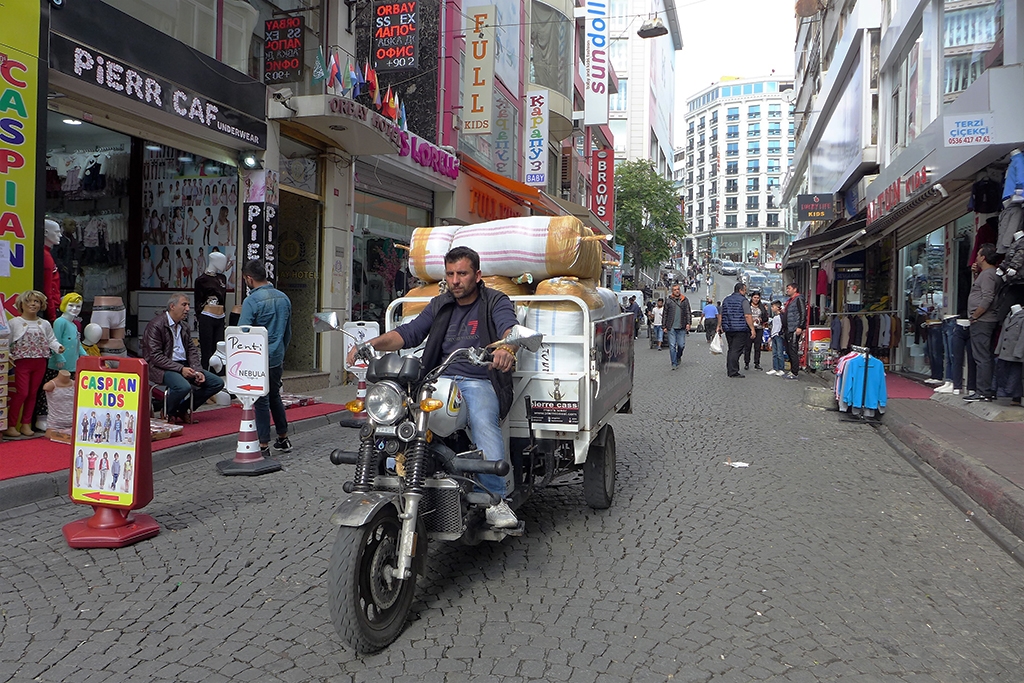 As you turn the corner from the stairs into the seventh floor corridor at Istanbul’s Hotel Malkoc, the strains of Persian-language pop music can sometimes be heard filtering through one of the doors.

When Eurasianet visited recently, that was a clue that a long-time guest at the hotel might be from Tajikistan. Tahmina Hotamova is among the growing crowd of Tajiks spurning Russia as a place for work in favor of Turkey.

Russia is a land of demoralizing hard work, where migration laws have been tightened and police routinely harass foreign laborers for bribes. Thousands of Tajiks are deported from there every year and banned from returning. In Turkey, authorities adopt a more laissez-faire approach.

Hotamova moved to Istanbul three years ago. She lives at the Malkoc because it is cheap – the broken lift helps ensure that – and in the heart of the bustling commercial district of Laleli.

Her room is spartan and small. There is little space for Hotamova to keep all her possessions. The dressing table is half filled with cosmetics and perfumes.

From the late 1990s until 2015, Hotamova lived in Dushanbe dealing in jewelry.

“Trading has been my life since childhood. I used to work with my mother, then I started my own business. Once I gained confidence, I took out a $100,000 loan from the bank,” she said.

With that money, she bought gems at $32 a gram. And then calamity struck. Her mother became gravely ill and died a month later.

“I couldn’t work. I gave my gold to others to sell. And they took advantage and abandoned me. One left for Russia, another hid from me. And on top of that, the [2015 financial] crisis hit. Banks demanded their money back, but I had nothing to give back,” she said.

The bank said it would have to confiscate the home where Hotamova lived with her seven children. She was forced to sell her gems at $26 per gram, so she could at least repay some of the money and negotiate an extension on her loan agreement. After that, she moved to Turkey, where she intends to stay at least until her debts are cleared.

“I am doing here what I was doing before – I am selling gold in a shop. And if they put in orders in Tajikistan for gold, in bulk or for private use, I send it,” Hotamova said.

Another sideline for Hotamova is helping the Tajik shuttle traders who make money carrying packages of wares for sale back home. The more clothes they can stuff into their dense, taped bundles, the more money they earn. As an experienced hand, Hotamova is especially skilled at the art of wrapping packages and does so regularly for a fee.

“There is a flight to Dushanbe this evening. We have to send goods, so we are in a bit of a hurry,” Hotamova said. She estimates that she personally handles around 70 shuttle traders every week.

“They buy cheap goods for Tajiks, who do not need expensive things. They just cannot afford them. All the high-quality stuff goes to Europe and Arab countries,” she said.

Istanbul is also a magnet for those who have been deported from Russia. There is a significant community of Tajiks in the Aksaray neighborhood earning their crust as drivers, sweeping the streets and working in textile factories. Women mainly get jobs as housekeepers and shop assistants.

Because so many operate in the gray economy, landing on a figure for the number of Tajiks in Turkey is pure guesswork.

What is especially appealing about Istanbul is the Babel confusion of nations and languages. The appearance of Tajiks does not draw special attention.

But there is no underestimating the hardship.

“If you compare Turkey with Russia, it is like heaven and earth. There are no constant checks, people are kinder. But even here it is difficult to work legally. I was unable to register my documents,” one Tajik man, who had been deported from Russia and declined to provide his name, told Eurasianet. “Also, while the Russians might be ashamed of doing menial labor, the Turks are not, so the competition for this kind of work is great.”

Instability in Turkey’s economy has left a toll. Average salaries are around 1,500 Turkish lira. That was around $500 in early 2018, but the devaluation of the currency has whittled that sum down to $280. Many who are assisted in making the trip from Tajikistan cannot afford their own accommodation and sleep in the same workshops in which they spend their days.

Special skill sets can assure better conditions. Dilafruz Rahmatova, 33, moved to Turkey one year ago after she was offered $900 per month working in a jewelry store.

“I’ve been dealing in gold since childhood. My parents were engaged in this line of business and I have been doing it for the last eight years,” Rahmatova said.

And Rahmatova said she had not yet felt the need to master Turkish as most of the people she deals with are fellow Tajiks or Russian-speakers from former Soviet states like Uzbekistan and Kazakhstan.

The choice between Russia and Turkey was easy for her.

“Russia doesn’t offer good salaries. Work permits are very expensive, so even with knowledge of the language, it’s not worthwhile to work there,” Rahmatova said.

Ahmadjon Muhsinzoda, a manager at the Sugdian Tour freight company who has been in Istanbul for three years, said the number of Tajiks going to Turkey is on the rise.

"Russia deports people over minor legal violations, it has been tightening migration legislation and also increasing the cost of work permits. You will not see this in Turkey,” he said.

Back in Tajikistan, Muhsinzoda ran a furniture workshop that employed 12 people. A financial crisis in 2015 triggered a fall in income. And tax inspectors began not only demanding more money but also prepayment.

“Income was not covering expenses, so I had to liquidate the workshop. Most [of my employees] went to work in Russia, others found jobs in other workshops. And I was offered a job in Istanbul, where I moved with the whole family,” said Muhsinzoda.

“If you have all your documents in order, they don’t hassle you too much here. Also, people who set up companies get breaks for a couple of years,” he said.

When Hotamova thinks about her future, she doesn't know whether she ever wants to go back to Tajikistan. Her original plan had been to pay off her debts and return.

“But now I think: ‘What am I going back to?’ If I return and open a business in Tajikistan, how will I deal with all the taxes?” she said. “And I have my children to worry about. My eldest daughter will be getting married. And the little ones have to be put on their feet.”