Workers are concerned that energy-hungry cryptocurrency mining is killing jobs. 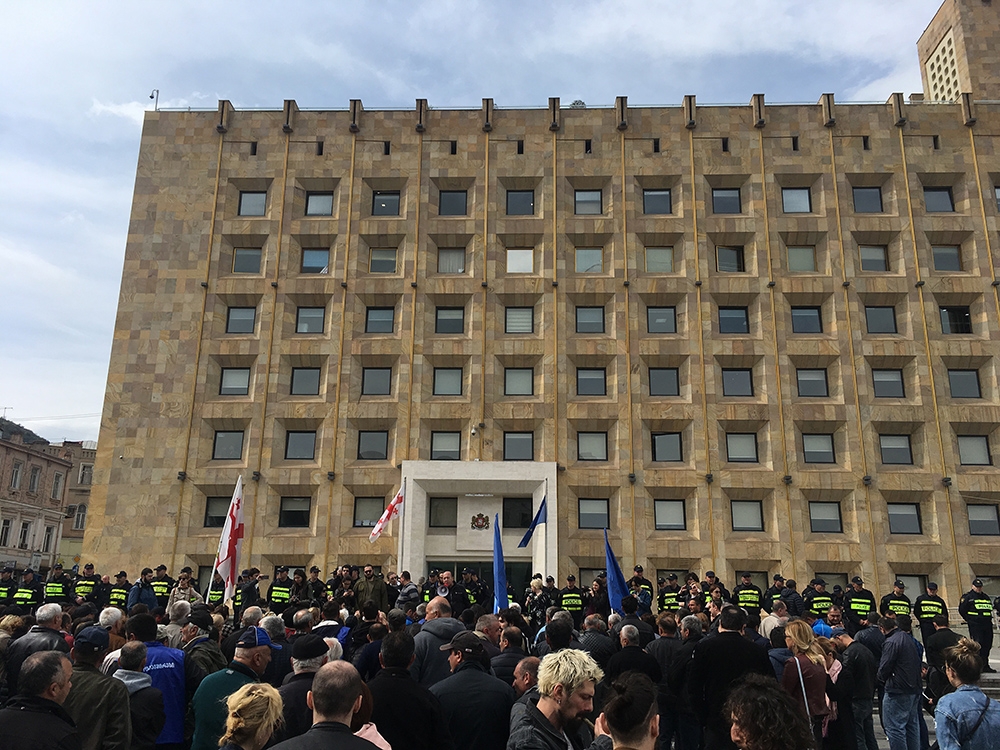 Protestors outside the Georgian Chancellery in Tbilisi on April 20. (All photos by Bradley Jardine)

The Agara Sugar Company, in the eponymous town about 90 kilometers from Tbilisi, was founded in 1932, and through the tumultuous decades has continued to fill Georgian stores with its distinctive lime-green and sky-blue packets of sugar.

But it may have finally met its match in cryptocurrency.

In October 2017, the company – now owned by Azersun Holding, an Azerbaijani conglomerate with ties to the ruling Aliyev family – closed shop, leaving its 481 workers unemployed. Without the factory, which makes its sugar from imported sugarcane, the town has no other source of income. Many locals have been living on store credits, forcing several small grocery shops to close.

After months of unemployment, the factory’s old workers have begun a campaign to save their enterprise. For nearly two months they have been camping outside the factory, blockading the gates with signs reading “Make Agara Work Again.” They have been demanding the Georgian government intervene to put them back to work.

But the company’s owner allegedly has other plans for the premises.

“After closing the factory, engineers started laying the foundations for bitcoin processors,” Zaza Alborishvili, a local trade union representative, told Eurasianet. “They brought in engineers and tech staff, most of them were members of our union and they tipped us off to what was happening.”

Since the launch of bitcoin in 2009, cryptocurrencies have appeared to be an unstoppable global technology force. Georgia has become a key player, establishing itself as the world’s third-largest producer of cryptocurrencies, according to local media. But Agara workers are far from impressed.

The company acknowledged last year that it was negotiating a lease agreement with investors to install a single terminal for the production of bitcoin, but said the computer would not have interfered with sugar production.

No agreement was reached, Nikoloz Natbiladze, Georgia’s former ambassador to Spain and now spokesman for Agara, said in a press release last year. “Reports that we are planning to start the production of cryptocurrency instead of a sugar factory are simply untrue.” Attempts to reach Natbiladze for further comment were unsuccessful.

The company said it was forced to close due to legal changes in the European Union, with which Georgia has had a free-trade agreement since 2016. After decades of protectionist policies, last year the EU decided to abolish minimum pricing and production quotas and begin exports – the biggest shake-up to the continent’s sugar economy since 1968.

“Before October last year, EU countries were limited in how much sugar they could export. Since these quotas were lifted, the increased supply of sugar on the world market has led to a reduction in prices,” Agara said in March.

This year, international prices fell to $350 per metric ton, reportedly much lower than the cost of production at Agara.

Workers expect the government to step in.

“How can we have no regulations or tariffs?” asks Avtandil Altunashvili, an Agara factory engineer. “The government does nothing for us anymore. This country is capsizing.”

The company said it is ready to invest in raw materials and open the factory again as soon as the price stabilizes.

“Every explanation we’ve received for the closure is unreasonable,” says Giorgi Diasamidze, a representative for the Georgian Trade Union. “People shouldn’t have to tell the government how to act – they should have foreseen these problems and planned for them.”

On April 18, a hundred or so workers began a 90-kilometer march to Tbilisi, arriving at the chancellery building downtown on April 20. They are demanding intervention to save the factory. If the government won’t save it, Diasamidze said, the workers will be forced to run it themselves.

Alborishvili agrees: “This is life and death for us.”

Indeed, the factory is central to the town’s very existence. Before 1932, Agara was a swamp. When Soviet leader Josef Stalin ordered the sugar factory built, workers from Russia, Ukraine and Georgia were brought in to drain the swamp and build the town. But the Soviet planned economy meant the town only existed around a single industry.

With the Soviet collapse in 1991, such “monotowns” – as they’re often known – fell into disarray. As crime and civil war rocked Georgia, criminal gangs would raid factories for scrap metal. Workers in Agara say they put their lives on the line defending the plant.

“In the ‘90s, when gangsters were dismantling workshops for scrap to export abroad, our fathers, and some of us who were old enough, formed armed units to defend our birthright. Day and night we guarded this factory because it was the only way to save this town,” Altunashvili, the factory engineer, told Eurasianet.

As they block the entrance to the factory, while their comrades march along the highway to Tbilisi, many of the workers feel a sense of déjà vu.

The struggle this time around, however, is over the factory’s power generator.

The process of creating bitcoin or other cryptocurrencies – “mining” – uses what’s known as a proof-of-work mechanism. A cryptographic puzzle is generated, requiring miners to invest resources (computing hardware and electricity) to solve. When a miner solves a puzzle, he receives monetary repayment in the form of bitcoin.

The more electricity you burn, and the more advanced your computing power, the higher your profit margins. As a result, countries like Georgia, which have relatively cheap electricity and generous tax laws, are appealing to the bitcoin mining industry.

The Agara factory is potentially attractive to investors thanks to its steam-powered turbine, said by the workers to be capable of producing 2.5 megawatts of energy per day.

According to Diasamidze, the Trade Union representative, processing sugar accounts for 1.8 megawatts of energy, leaving 0.7 megawatts spare. One of the protesters’ demands is a contract stating clearly that if bitcoin servers are installed, they will not be able to use more than 0.7 megawatts from the factory turbine.

“If they go above that level they’ll cut into our power and force us onto the national grid,” he says. “This would make our production more expensive and make it more likely for us to be shut down.”

There are also concerns that the expansion of bitcoin in the factory will push up energy prices in town.

In 2015, Bitfury – one of the world’s largest bitcoin mining companies – bought an 18-hectare plot of land in Tbilisi’s Gldani region for the symbolic price of 1 lari ($0.41). Soon after opening, the region’s monthly electricity consumption jumped by 7 million kilowatt-hours.

The price Bitfury pays for the energy has not been made public.

“Bitcoin is a scarce resource,” says Akaki Tsomaia, an economist at the Caucasus University in Georgia’s capital. “To create more of it, energy use will have to increase, and in the short term, electricity prices will rise.”

But whether they will level out in the long term is difficult to say.

According to Tsomaia, the extra profits from energy could, in theory, be reinvested into developing the energy sector and making it more efficient. But many of Georgia’s opposition politicians suspect that Bitfury is operating with generous government subsidies.

Eurasianet reached out to the Ministry of Economy for comment, but received no response in time for publication.

“We don’t know if they pay at market prices,” Tsomaia says. “But I can say that as an economist, I think it would be very inefficient for our energy sector to be subsidizing bitcoin.”

Recent studies have also shown that bitcoin mining creates very few jobs and may even divert energy and capital from other more productive and high-employment sectors. This is particularly problematic in Georgia, where official unemployment stands at 11.8 percent.

As the workers continue their march on Tbilisi, spirits are high. “Victory to the sugar workers, victory to Agara!” they chant as onlookers drive by, beeping their horns in solidarity.

“With each step we are becoming stronger,” he says. “We’ll win because we don’t have a choice.”