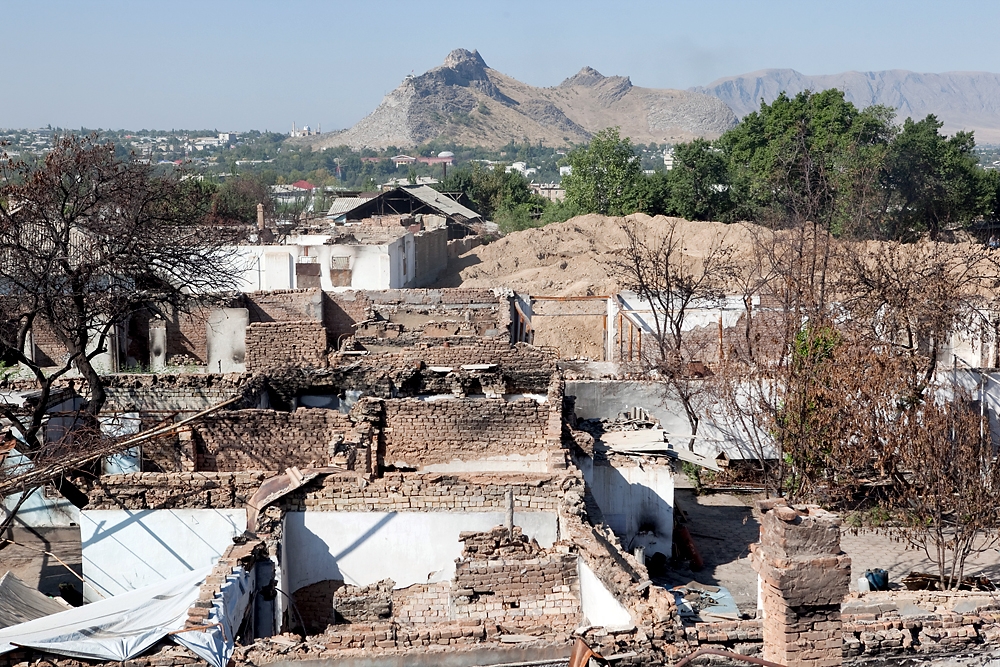 Sulaiman Too mountain - long a sight of pilgrimage - rises in Osh behind the heavily damaged Sharq neighborhood. 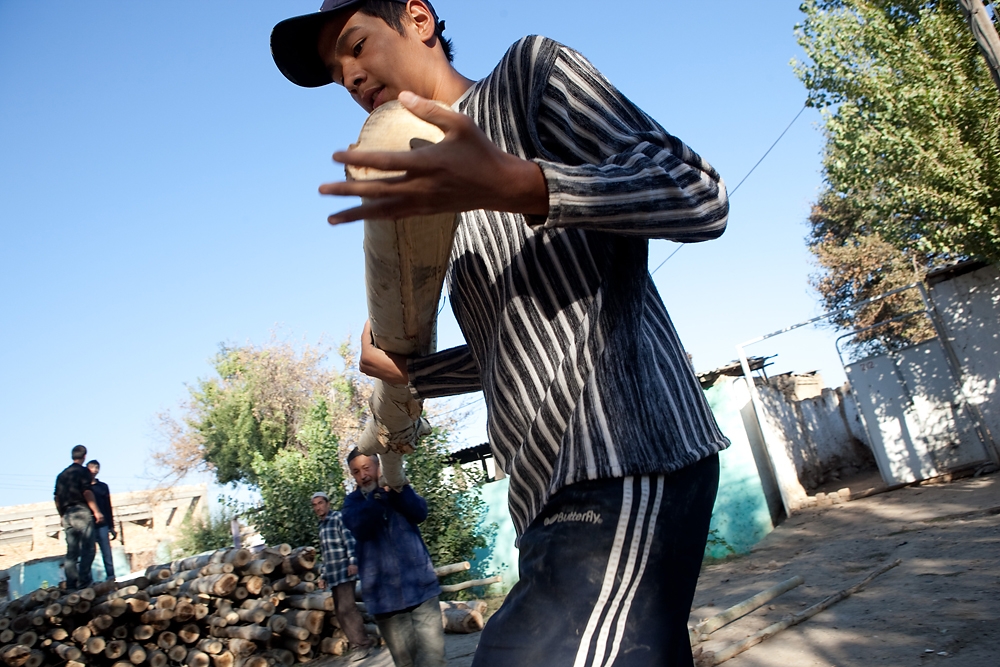 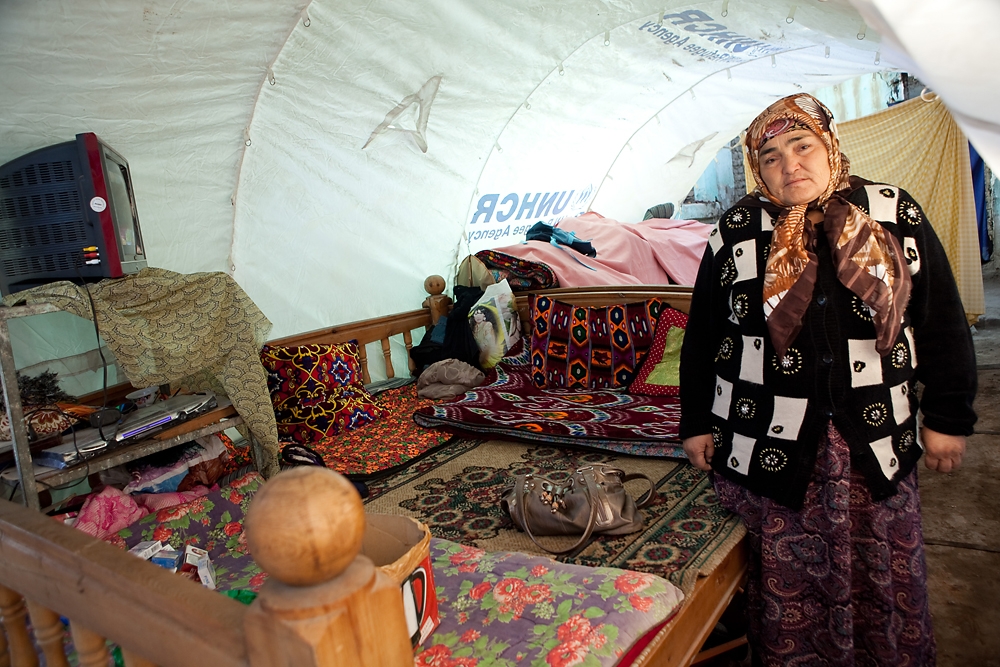 Living with her family in a UNHCR tent in her yard, this woman is one of many who do not wish to move to IDP camps. 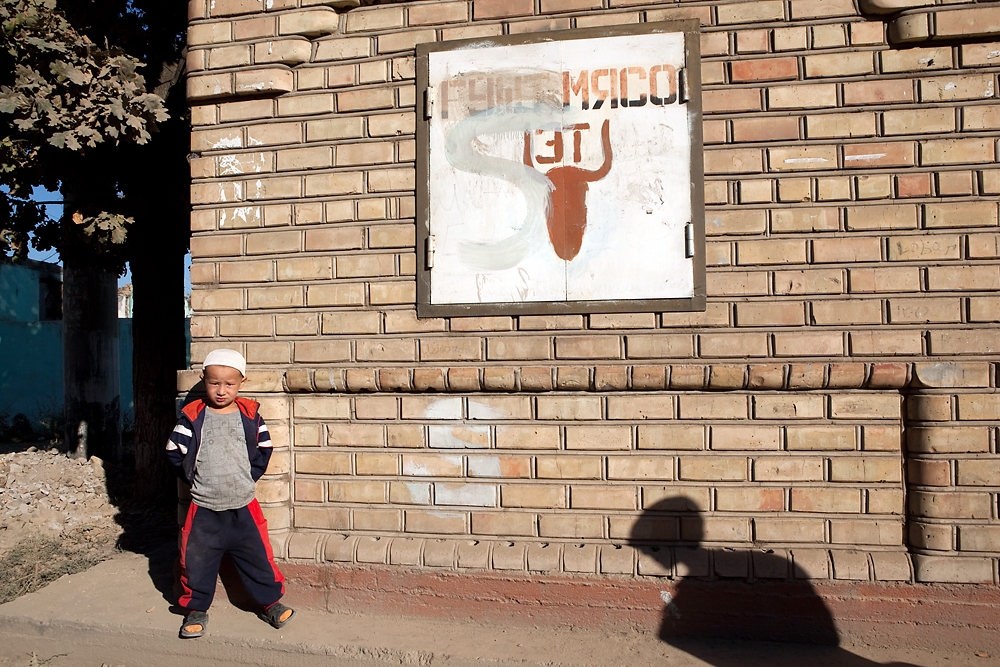 Someone has crossed out the Uzbek word for meat, leaving only Russian and Kyrgyz on an Osh sign. 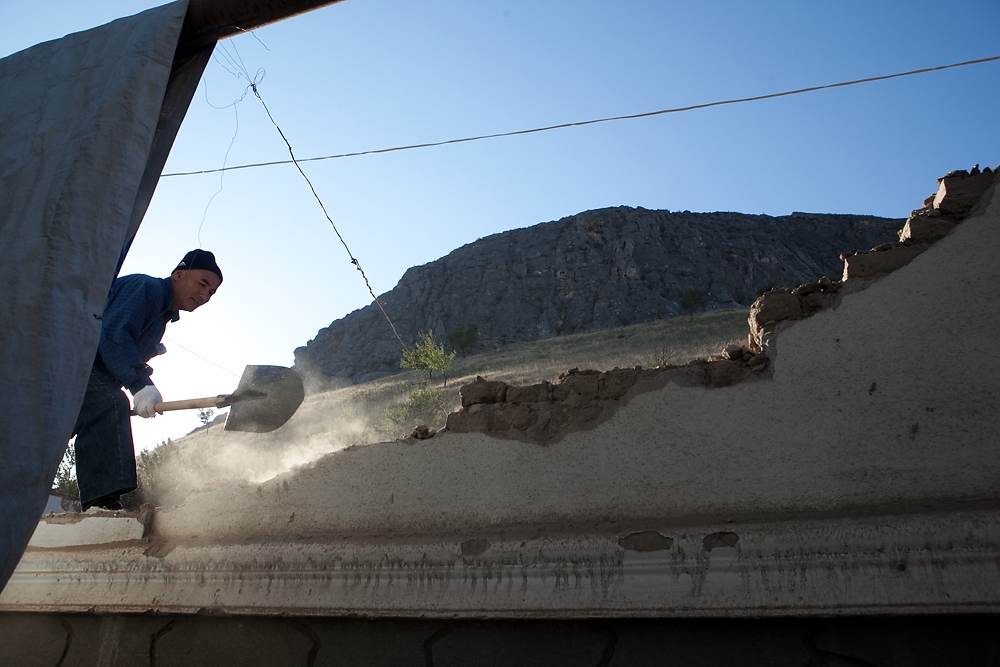 A man tries to salvage bricks from his destroyed home on Alisher Navoi Street in the Kyzyl-Kyshtak neighborhood of Osh. 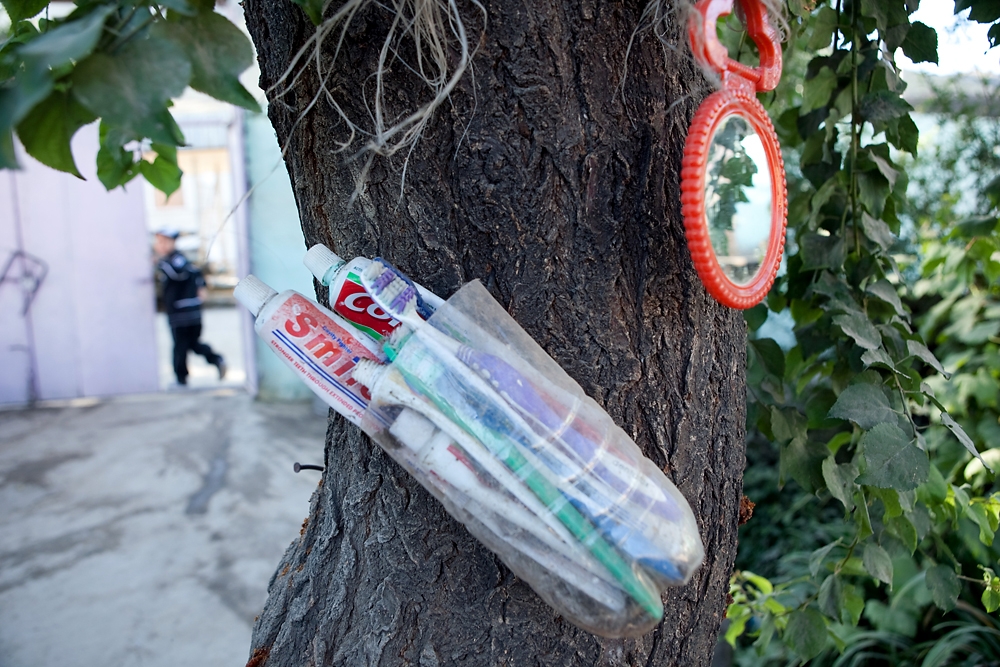 Some Uzbek courtyards look like camping sites as families live out of tents and brush their teeth with water from a hose. 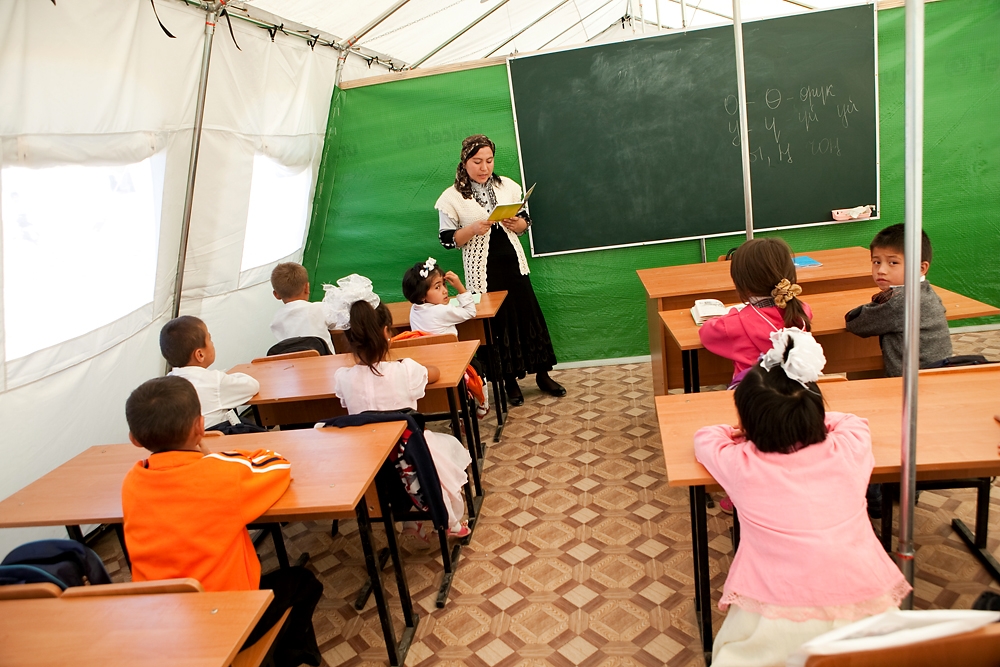 Students of the destroyed Lev Tolstoy School study in tents at a former cotton farm. 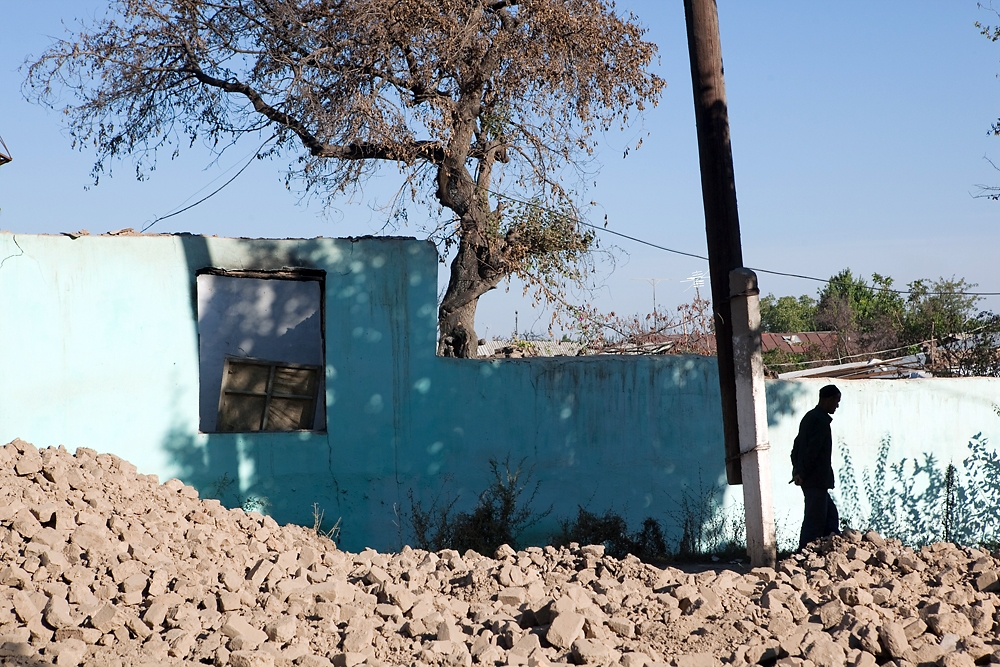 Boys play in the ruins of a shop in the Kyzyl-Kyshtak neighborhood. 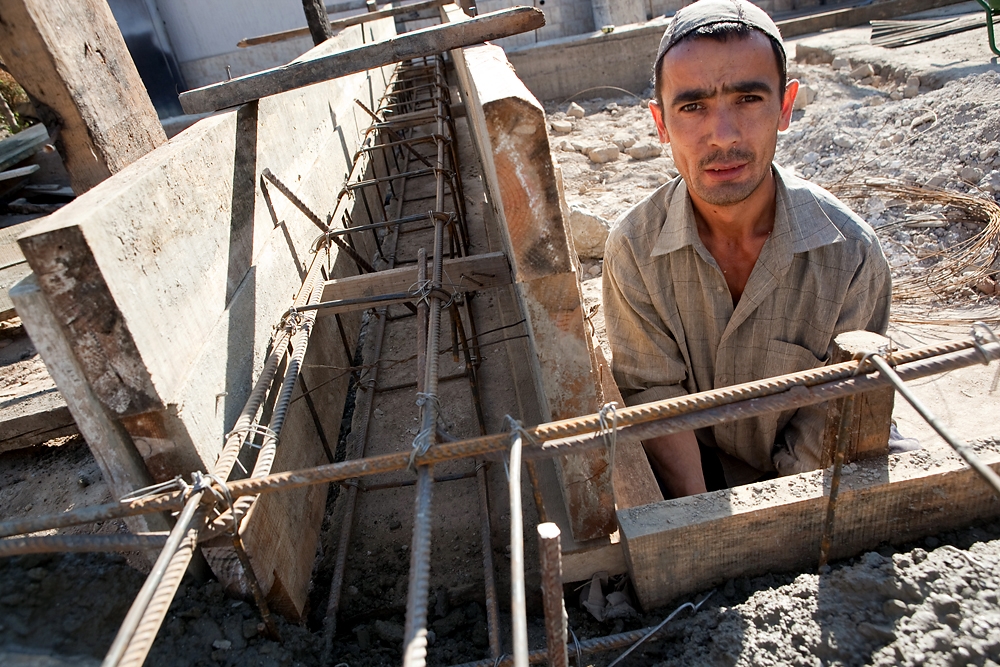 In the Furkat neighborhood of Osh, men have begun to lay some foundations. 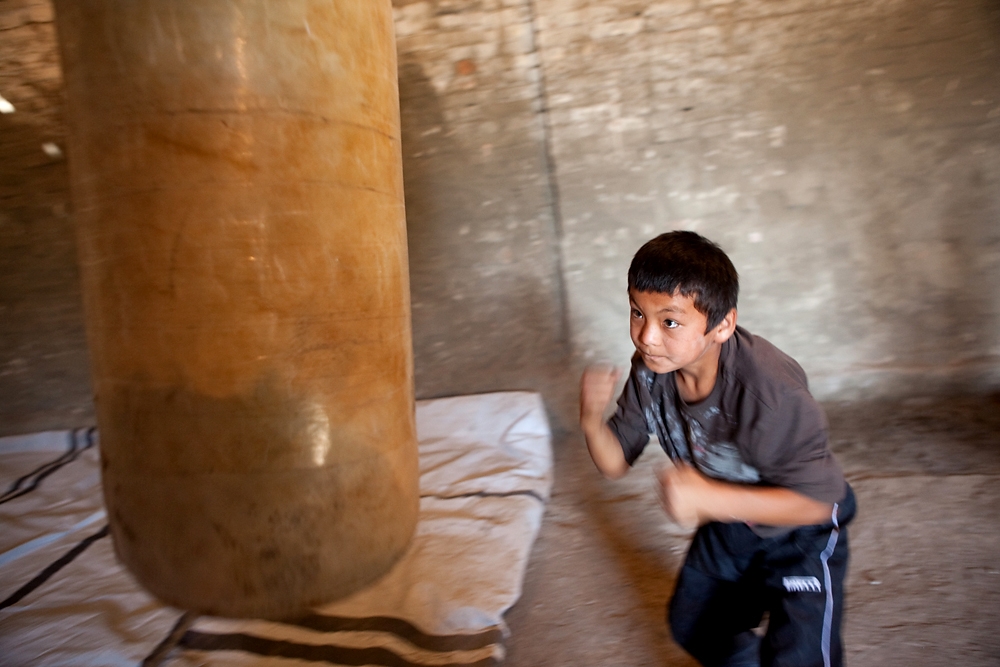 Inside a camp for IDPs in the Sharq neighborhood of Osh, a boy boxes in a makeshift gym. 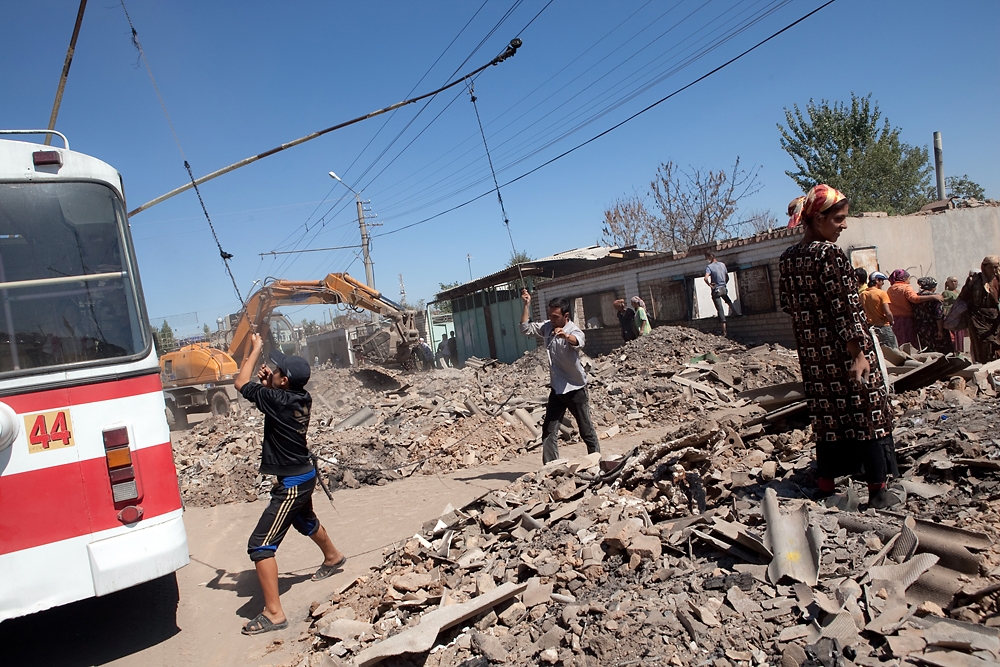 Women scavenge through the rubble on a main street in Osh. Aid workers worry the debris is full of asbestos dust. 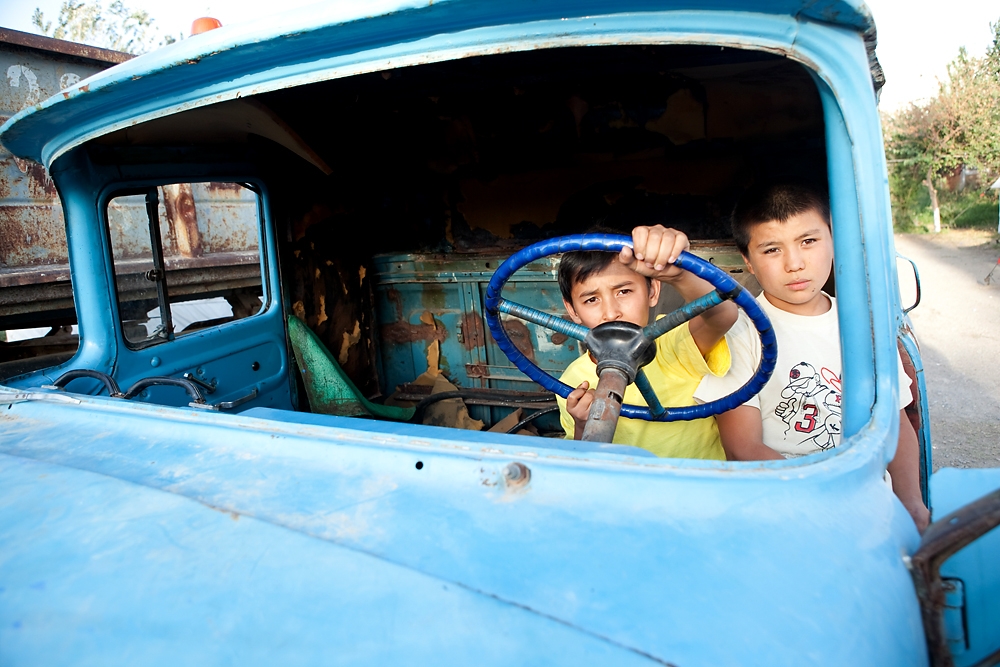 Children play in the rusting shell of an old Soviet truck inside a camp for IDPs in the Sharq neighborhood. 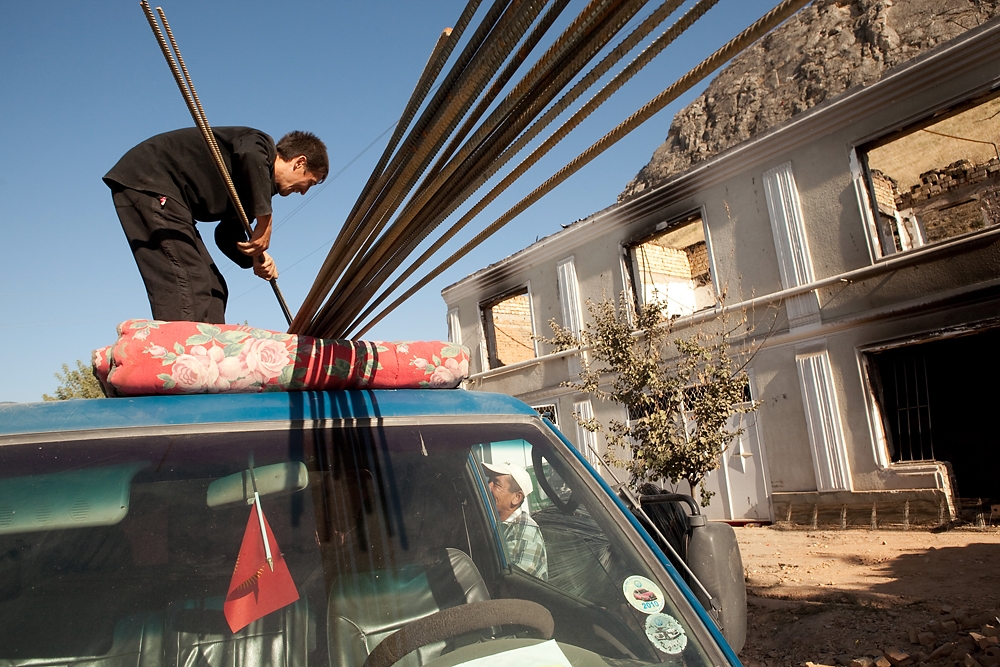 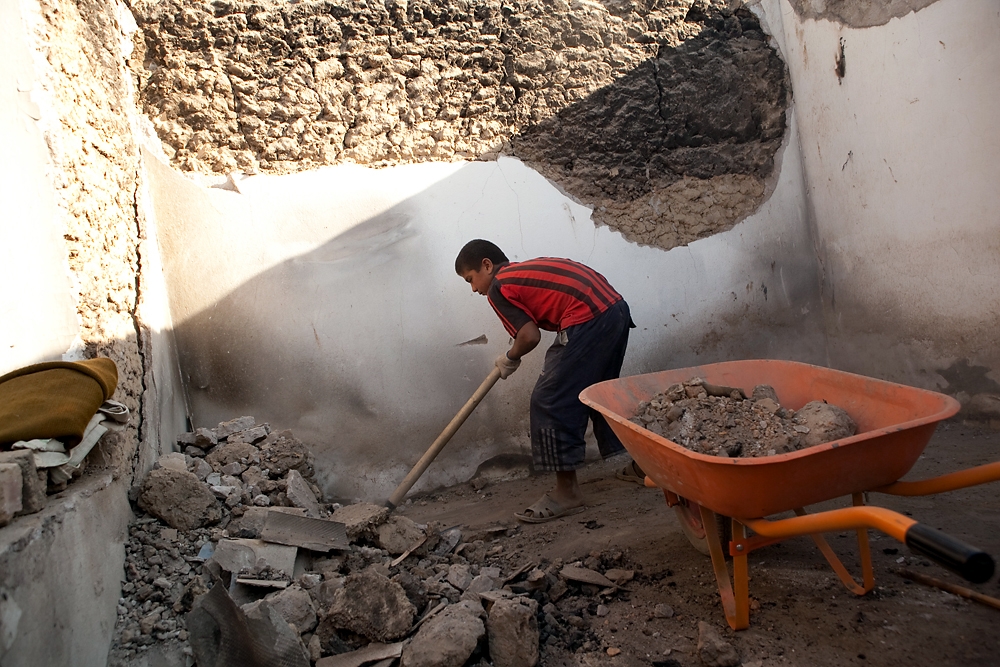 Twelve-year-old Hasanbai clears rubble from his home in Osh.
prev
next

Three months after interethnic violence left almost 2,000 homes across southern Kyrgyzstan destroyed, in Osh, the center of the violence, reconstruction is just beginning. A sense of urgency to pick up the reconstruction pace is growing as the first cold nights of fall descend on the city.

In many damaged neighborhoods, men are still picking through rubble to make room for new foundations. Meanwhile, some playing children are exposed to asbestos dust.

International relief organizations provide the homeless with construction materials, but work has started well behind schedule. Privately, aid workers complain that the Osh City administration is not collecting rubble from the roads as promised, slowing the ability to deliver new construction materials to work sites.

Many families still live in UN-provided tents, located in compounds. In the city’s Sharq District, 50 families of displaced Uzbeks live in a camp with one communal outdoor kitchen. Down the street, 658 children – ranging in age from first-graders to high-schoolers -- attend classes in tents set up on a cotton farm. Their school, named after Leo Tolstoy, was destroyed in the violence.

Most of the destruction occurred in Uzbek neighborhoods. International aid organizations arrived soon after the fighting, but had to contend with a lack of funding and local disputes about how aid should be distributed.

David Trilling is the Central Asia news editor for EurasiaNet.