As Tajikistan mobilizes 20,000 troops, Taliban says it poses no threat

The number of Afghan troops that have fled into Tajikistan is now more than 1,500. 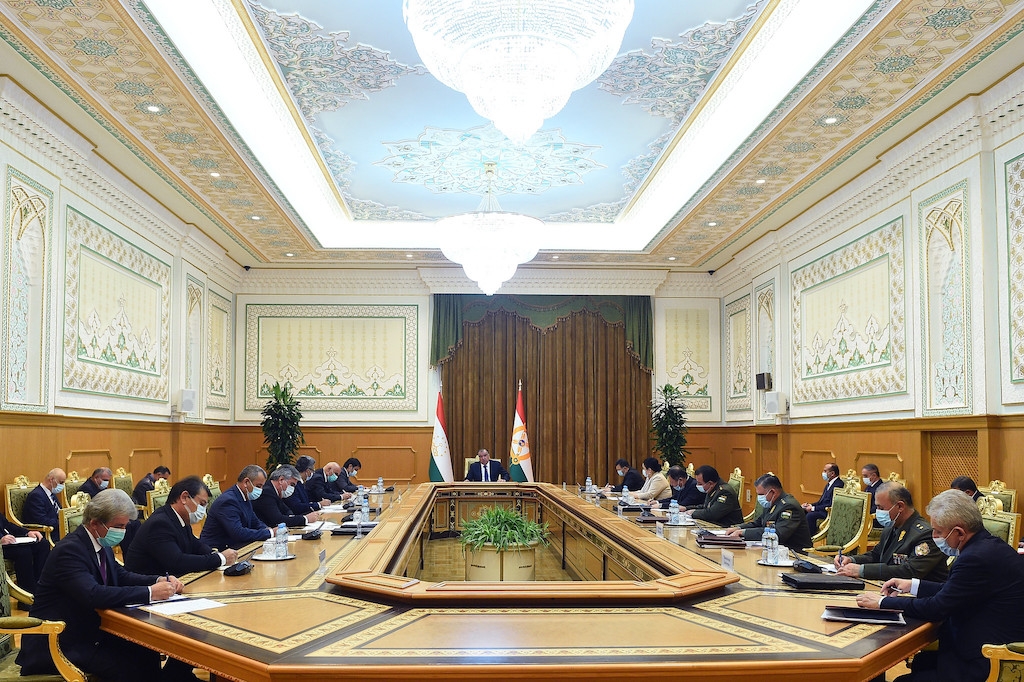 Afghanistan’s Taliban movement has sought to reassure Tajikistan, which has over the past few days offered a haven to hundreds of fleeing Afghan government soldiers and mobilized 20,000 of its own troops, that it poses no danger.

In an apparent attempt to calm moods along countries north of the Afghan border, Zabiullah Mujahid, a spokesman for the Taliban, pledged that the group would respect the security and inviolability of Tajikistan, Russia’s state-owned Sputnik news website reported on July 6.

“We will maintain good relations with the friendly country of Tajikistan. Security will be maintained on the border and there will be no interference,” the spokesman was quoted as saying.

It is not certain that this will be sufficient to soothe nerves in Dushanbe. At a meeting of national security officials convened on July 5, President Emomali Rahmon ordered the Defense Ministry to mobilize 20,000 servicemen to help bolster the border with Afghanistan.

Rahmon on the same day spoke over the phone with Russian President Vladimir Putin to discuss the rapidly evolving situation in Afghanistan, where around one-third of the country’s districts have reportedly fallen under Taliban control.

“The heads of state stressed that the Tajik-Afghan section of the border is of strategic importance in terms of ensuring the security of the southern borders of the Collective Security Treaty Organization and the Commonwealth of Independent States,” Rahmon’s office said in a statement, alluding to two Moscow-dominated multilateral organizations.

Russia has a large armed presence in southern Tajikistan in the form of its 201st military base. Tajikistan and Russia regularly conduct joint military exercises, ostensibly with the prospect of incursions from the south in mind. Russia’s chief of General Staff, Army General Valery Gerasimov, said in April that four such drills were planned for 2021 alone.

A spokesman for Russia’s Central Military District, of which the 201st base is a part, said on July 6 that it had conducted an exercise strike from attack helicopters in Tajikistan in a simulated scenario involving an incursion by an “illegal armed group.”

Two Mi-24 attack helicopters, two Mi-8MTV5-1 transport helicopters, and around 100 military personnel were deployed in the simulation, the spokesman was quoted as saying by Interfax news agency.

“As a result of the air strike, more than 15 ground targets simulating a convoy of vehicles, firing positions, and weapons and ammunition caches were destroyed," the spokesman said.

Russian Deputy Foreign Minister Andrei Rudenko said on the same day that Moscow stood ready to provide Tajikistan with any assistance it needed.

“It all depends on how the situation develops in northern Afghanistan. The situation there is quite tense, since, according to some sources, up to 70 percent of the border with Tajikistan is controlled by the Taliban,” Rudenko said, according to the same Interfax report.

The main problem Tajikistan is having to handle for now is the sheer number of fleeing Afghan troops crossing the border.

The State Committee for National Security, or GKNB, on July 5 released a statement to say that 1,037 Afghan servicemen had escaped for their lives overnight in the face of overwhelming onslaughts from Taliban forces. The soldiers crossed at multiple points across the Afghan province of Badakhshan’s 910-kilometer border with Tajikistan.

Many such mass flights have occurred over the past two weeks, but this was by far the largest to date.

Social media is brimming with images of incoming Taliban fighters being greeted warmly by villagers in the province.

The Wall Street Journal has reported that the Taliban is already reaping the dividends of its strategy, which appears heavily tilted toward capturing Afghanistan’s perimeter regions.

The newspaper stated in a report published on July 5 that the U.S.-built Shir Khan Bandar border crossing is still operational, and that the Taliban has reached an arrangement with Tajikistan to keep traffic flowing.

“We informed all these governments and assured them that the routine work of the border, the customs, will be running as before,” a Taliban spokesman, Suhail Shaheen, told WSJ. “Even the staff members of the customs, we have not changed them, we told them: Do your work as it was. We haven’t even changed the stamps. The reason is that we don’t want to create problems for businessmen, for traders, for common people.”

Uzbekistan, meanwhile, closed its border with Afghanistan, which is traversed by the rail-and-road Friendship Bridge, as early as June 22, citing epidemiological concerns amid a new surge of COVID-19 cases.

Turkmenistan, the other Central Asian nation with a long border with Afghanistan, has remained customarily silent on the evolving situation, but one important dry port on the border is said to have stood idle for the past week in light of nearby fighting.