President Rahmon seeks to cloak himself in legitimacy with faith while tormenting the devout. 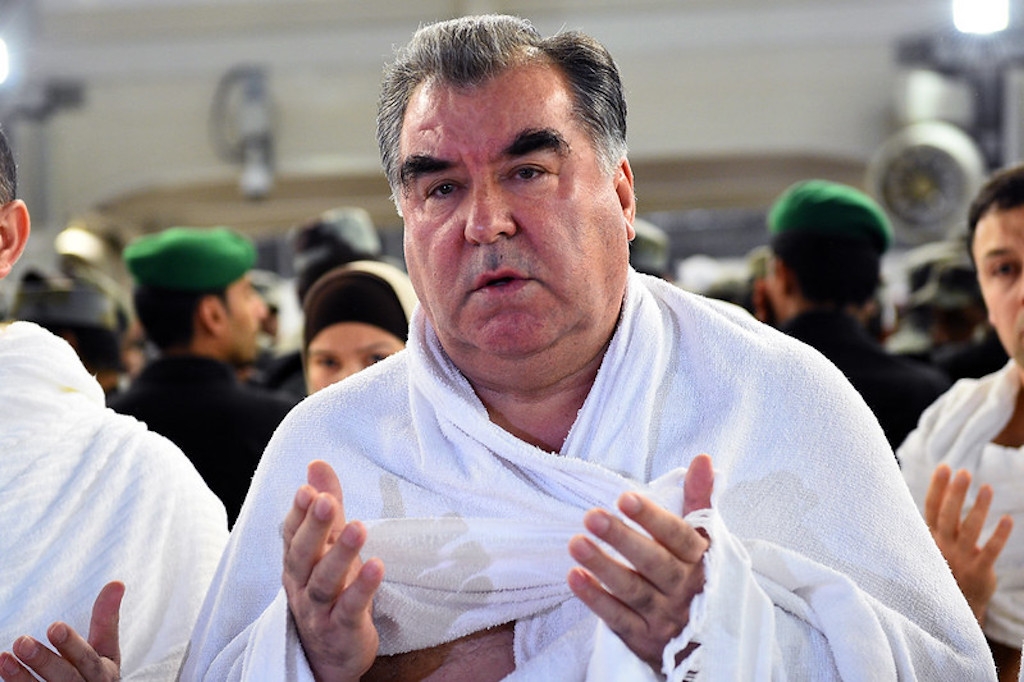 Mecca like a Muslim: Rahmon reciting prayers while performing the hajj in 2016. (Photo: Presidential administration)

Authorities in Tajikistan’s second-largest city have ordered that a large and popular working mosque be converted into a cinema, in another yet another outright assault by the government on Islamic institutions.

Around 2,000 or so mosques have been liquidated across Tajikistan over the past three years on the grounds that they lack the required documentation, but for a particularly spacious place of prayer to be targeted this way implies that the campaign is being escalated. When they are deconsecrated, mosques are often turned into cafes, sewing factories, kindergartens and other public facilities.

Asia-Plus newspaper on January 28 cited Bahtiyor Qosimov, the head of the culture department in the Sughd regional government, as bemoaning the lack of cinemas in Khujand, which is situated in the north of the country.

For that reason, the Nuri Islom mosque, which could accommodate up to 5,000 worshippers, will be installed with film-projection equipment in a hall with 80 seats, he said.

“Other than showing films, we will also have meetings for film aficionados. After showing the films, people will be able to get together and discuss what they have seen. That is what they do in Europe,” Qosimov said.

The newly created cinema is set to open its doors in March, in time for the Persian New Year festival of Nowruz.

At the end of last year, President Emomali Rahmon called on his citizens to desist from building mosques, and to erect schools and hospitals instead. He said that the population had with its own hands built more than 5,000 mosques and that the time had come to reinvest that energy into building schools and health clinics.

Rahmon’s attitude to Islam is paradoxical and self-serving. On one hand, he seeks to cloak himself in the legitimacy of faith, very literally, such as when he performed the hajj together with his family and several top officials in January 2016 – a feat that is memorialized in a series of photos showing the corpulent, sweaty leader performing prayers at the Great Mosque of Mecca.

In the meantime, he has unleashed one wave after another of intimidation against all Muslims abiding by their faith outside the narrow and highly secularized constraints established by the government. Men are often harassed by police for growing beards, while women in hijabs are routinely hauled in for intimidation. Imams deliver pre-prepared sermons approved by the authorities, and the content is often devoted to praise of Rahmon and the national leadership. Larger mosques are equipped with surveillance cameras to ensure injunctions are being fulfilled.

In recent weeks, the authorities have turned the screws even further by arresting dozens of people they accuse of being members of the Muslim Brotherhood, a movement born in Egypt in the 1920s as a vehicle for restoring what its founders considered a purer form of Islam, as well as a form of resistance against the perceived cultural impositions of British imperial overlords.

Authorities had until now avoided confirming that these arrests were taking place, but General Prosecutor Yusuf Rahmon told reporters on January 28 that 113 people have been detained since the start of the year on suspicion of being adherents to the Muslim Brotherhood, which has been banned in Tajikistan since 2006.

“Among the detainees, there is one employee of the city administration of Isfara and about 20 teachers from various universities in Tajikistan,” Yusuf Rahmon is reported as saying by Asia-Plus.