Online battles between patriotic Russians and Georgians have raged, while some opposition figures are calling for a visa regime for Russians. 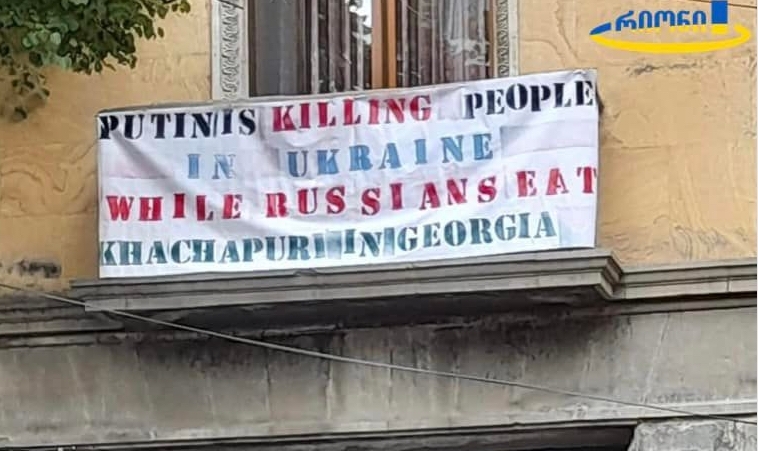 Tensions are again running high in Georgia over the influx of Russians into the country.

In recent weeks the issue has returned to the top of Georgians’ agenda, as the summer tourist season has brought a new flood of Russian visitors to the country. Social media is full of grievances against badly behaving Russian tourists – one viral photo showed a banner reading “Putin is killing people in Ukraine while Russians eat khachapuri in Georgia” – and some opposition groups have proposed introducing a visa regime for Russian visitors.

“The flow of the visitors from the occupying country is beyond control,” the opposition Lelo for Georgia party said in an August 2 statement, calling on the authorities to introduce visa procedures, albeit simplified ones, for Russians and Belarusians. “Relevant agencies cannot and do not control the citizens entering our territory from the occupying country,” the party said, arguing that threats to Georgia “have drastically grown amid the Russian invasion of Ukraine.”

Like citizens of nearly 100 other countries, Russians can enter Georgia without a visa and stay up to a year.

Russians began flooding into Tbilisi immediately following the launch of the war in February. That quickly resulted in a backlash, including calls to introduce a visa regime: Georgians, who strongly sympathize with Ukraine, had little sympathy for Russians who said they were fleeing an intensifying government crackdown on critics and crippling international sanctions.

Tensions then eased for a time, only to boil up again in the hot summer months with even more intensity.

The incongruous sight of Russian tourists enjoying their holidays while their government prosecutes a murderous war has exacerbated long-standing Georgian sensitivities to Russia’s role in their own country. Episodes of ugly Russian tourist behavior – initiating conversations in Russian without asking, playing Russian music loudly – recall a long history of Russian chauvinism toward Georgians, and are eagerly amplified on social media. Economic concerns, too, have added to the tension: inflation is rising and rent prices have risen dramatically as landlords seek to capitalize on the Russian influx.

An online petition launched August 3 calling on the authorities to restrict stays for Russians and Belarusians to three months quickly gathered more than 20,000 signatures.

The social media panic reached a peak when a bar popular among Tbilisi club youth came under online attack. The bar, like many similar establishments in Tbilisi, had instituted its own sort of “visa regime” to enter: It quizzed potential patrons on their political views, including whether they supported the war, Vladimir Putin, or Georgia’s territorial integrity. (Georgia considers its two breakaway regions of Abkhazia and South Ossetia to be occupied by Russia).

“We need to make sure that brainwashed Russian imperialists do not end up in our bar,” reads the application form for the bar, Deda Ena.

Russian trolls then organized an online campaign, flooding the bar with one-star Google ratings and “reviews” that included threats and taunts about the 2008 war between the two countries. (Google eventually removed the bad reviews.) Many Georgian social media users initially took the reviewers to be actual Russian tourists, though it then emerged that the campaign was organized from abroad by a far-right Russian group.

Government officials, meanwhile, have downplayed the Russian influx and blame the backlash itself for inflaming tensions.

The number of Russian citizens who entered Georgia this year is in fact a third the amount who entered during the same period in the last pre-pandemic year, 2019, said Irakli Kobakhidze, the chair of the ruling Georgian Dream party.

“If there is something that poses a threat to our country, it is precisely this xenophobic and chauvinistic campaign,” he told reporters on August 5.

The number of Russian citizens who arrived in Georgia since the start of the war and who remained as of the end of July amounted to under 110,000, many of them ethnic Georgians or short-term visitors, Kobakhdize said. He estimated that Russian nationals who intend to settle permanently in Georgia amount to 20,000 or less.

The estimate of a two-thirds drop since 2019 was backed up by the corruption watchdog group Transparency International Georgia, in its own report on Russian influence in Georgia. It also found that Russians represent a smaller share of foreign visitors this year than they did in the same period of 2019. (Numbers for July and August, the peak of the tourism season, are not yet available.)

And while the raw numbers of Russian visitors may have dropped, their heavy presence in Tbilisi, particularly its trendiest central districts, is unmistakable.

A recent survey by a Russian anti-war group found that Georgia was the second most popular destination for Russian emigres, with more than 23 percent of Russians leaving after the war coming to Georgia, behind only Turkey and just ahead of Armenia. The survey also found that just 1.5 percent of the emigres had voted for the ruling United Russia party.

Kobakhidze also accused the opposition of being hypocritical, noting it was the previous government that lifted the visa regime for Russians.

“The number of [Russian] tourists arriving now is the same as the number of those arriving before the pandemic, nothing special is happening,” Shalva Papuashvili, the parliament speaker, told reporters on August 8. “The only purpose of this xenophobic campaign is to cause turmoil.”

But others pushed back against the idea that the backlash amounted to xenophobia.

Negative attitudes among Georgians are understandable, given that Russians “may be fighting against this country or may do so in the future if their government calls them,” Public Defender Nino Lomjaria said on August 5.