As U.S. Prepares To Exit Afghanistan, Uzbekistan Warming To Russia? 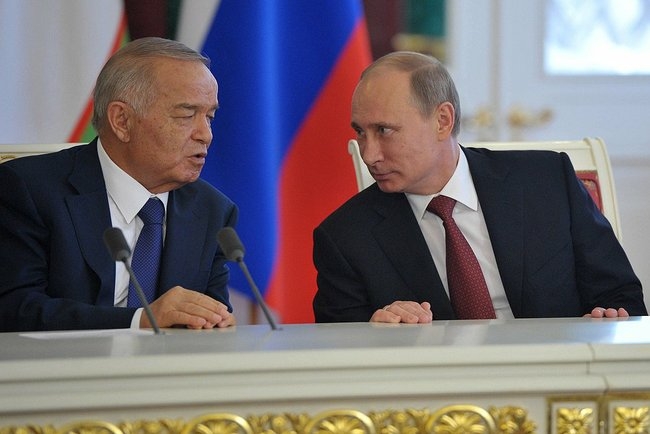 When Uzbekistan's president, Islam Karimov, visited Moscow earlier this month, was he trying to shore up his relations with the Kremlin at the expense of Washington? That seems to be the expert consensus that is emerging in the wake of the meeting between Karimov and his Russian counterpart Vladimir Putin.

Russia's reaction to Karimov's growing ties with the U.S. generally oscillates between two poles: alarmism that Uzbekistan is falling into the Western geopolitical camp, and confidence that Karimov -- who has repeatedly and dramatically shifted his superpower allegiances -- will eventually return to Moscow's fold. On the eve of Karimov's visit, a report in the Russian newspaper Kommersant quoted an alarmist:

The Uzbekistan Ministry of Foreign Affairs declined to comment on the situation. But Kommersant's sources in the Russian government admit that the situation worries Moscow. "The Uzbek authorities confirm their interest in strengthening military-technical cooperation with Russia, reassuring [Moscow] that there will not be any American military infrastructure on their territory," said Kommersant's source. "But with deliveries of Western weapons and equipment to Uzbekistan will come Western instructors and technicians, and then the establishment of a base is not far away."

And some commentators say that Karimov's goal in coming to Moscow was to assuage such fears. Russian analyst Andrei Grozin told CA-News that "the Uzbek side decided to dispel Russian concern regarding his excessively pro-American position":

The Russian analyst called attention to the fact that the US has over the past one and a half or two months indirectly tried to make it known to Tashkent that it needs to temper its appetite regarding compensation for the use of the northern route of cargo transit from Afghanistan.

"The thesis that Washington will at any price is ready to arm Uzbekistan to the teeth and turn it into its unsinkable aircraft carrier in the region, seems to me to be an exaggeration. The US understands what kind of serious problems that would create in regional politics and in relations with China and Russia, which are difficult enough without that." In Grozin's opinion, understanding that situation, Islam Karimov rushed to assure Moscow that bilateral relations between Uzbekistan and Russia will maintain a special importance, and that Uzbekistan is solving some of its financial problems on the US's account.

Despite Tashkent’s decision to suspend its membership in the CSTO... bilateral security ties with Moscow were never jeopardized. Although some experts surmised that the move by Tashkent might signal its readiness to open a foreign military base on its territory, this did not occur. And since suspending its CSTO membership, bilateral security discussions with Moscow actually intensified. Tashkent explained to Moscow its reasons for suspending CSTO membership, and Uzbekistani officials told Jamestown that this position was fully understood by their Russian counterparts. Karimov wanted to focus Uzbekistan’s preparations for 2014 on improving domestic security capacities and building ties with foreign partners through bilateral routes and so he shed the multilateral forum of the CSTO—which few in Tashkent had truly believed represented a serious mechanism for building regional security. Equally, using the CSTO option presented an overly complex route to agreeing terms with Moscow that best suited Uzbekistan’s long-term security interests.

And this warming of bilateral ties will include military aid, he adds:

The strengthening of the Uzbekistani-Russian bilateral security relationship linked to post-2014 Afghanistan has been in preparation for some time and clearly suits the interests of both states. An element in this deepening of ties will be for Russia to explore how to compete with the United States in offering military-technical assistance to Central Asia. This will involve Moscow discerning the areas on the lists of equipment transfers that Tashkent presents to the Pentagon are not met, and making up the difference, if possible. But the key feature in this strengthening of ties ahead of the drawdown is in the realm of intelligence cooperation, and this will have very significant implications for US policymaking in the region.

U.S. Assistant Secretary of State is in Tashkent this week, meeting with Karimov. Undoubtedly all this will be part of their conversation.