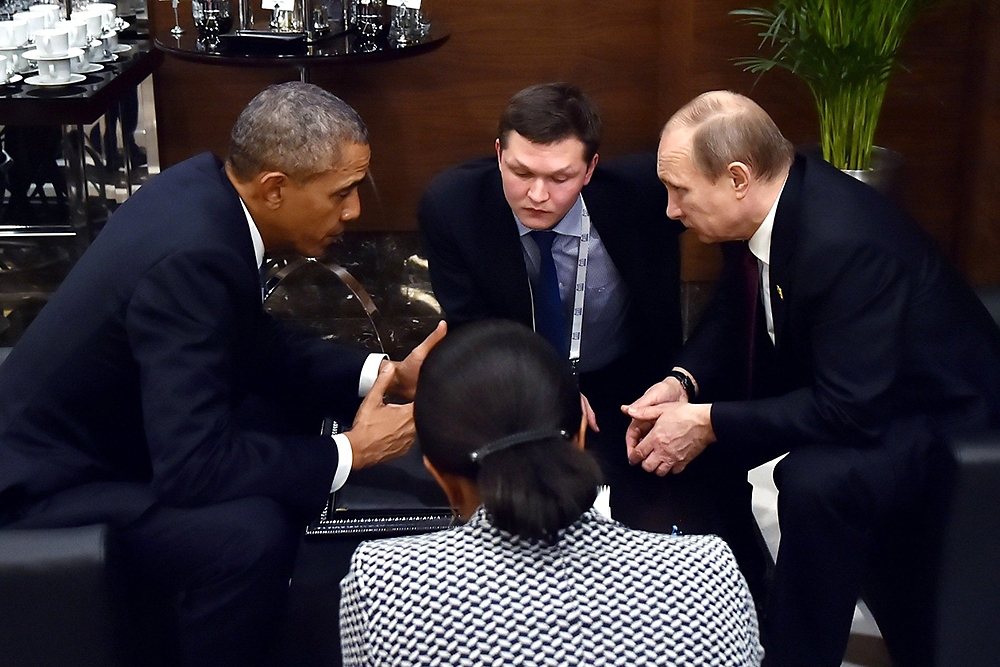 Can ISIS bring them together? (Photo: Russian Presidential Press Service)

It would be prudent in the aftermath of the Paris terrorist attacks for the United States and Russia to find ways to overcome strategic differences and wage a joint fight against Islamic State militants. But the level of distrust is such that bilateral relations seem more likely to get frostier before any thaw can occur.

The pressure on the United States, the European Union and Russia to come together has risen considerably since the Friday the 13th killing spree in Paris left over 130 dead. French President Francois Hollande said November 16 that he would encourage US President Barack Obama and his Russian counterpart Vladimir Putin to join an anti-Islamic State coalition that would “unify our strength and achieve a result that has been too long in coming.”

Sensing the urgency of the situation, Obama and Putin huddled on November 15 on the sidelines of the G20 gathering in Turkey. A White House statement called the tête-à-tête “constructive,” adding that the conversation focused on the “ongoing efforts to resolve the conflict in Syria.”

Putin, in comments published by The Wall Street Journal on November 16, appeared to hold out the prospect of greater cooperation. “If our partners think the time has come to change our relations, then we will welcome that,” the Journal quoted Putin as saying. “We have never refused joint efforts, or closed doors.”

Putin’s comments suggest he may be angling for some sort of quid-pro-quo to secure a greater degree of Russian cooperation, namely the easing, or lifting altogether of sanctions imposed by Washington and Brussels in the aftermath of the Kremlin’s land grab of Crimea in 2014.

The chances of that happening seem slim. Obama administration officials have emphasized that the November 15 discussion between the US and Russian leaders would not change bilateral relations in an appreciable way. Russian presidential spokesman Dmitry Peskov also tamped down speculation about a rapprochement.

“It would be absolutely unrealistic to expect a 20-minute meeting might herald a U-turn in bilateral relations,” the Tass news agency quoted Peskov as saying. “These relations are what they are. So are the disagreements. But there is also the understanding the Russian-US dialogue has no alternative.”

Judging by the rhetoric at a November 16 security conference in Washington, DC, it seems that US-Russian relations could get worse before they improve. Russia experts at the gathering, which was hosted by the Center for Strategic and International Studies, a Washington think tank, tended to advocate for a tougher US stance toward Russia.

“Without firmness there is no leverage,” noted former US Ambassador to Russia Thomas Pickering.

Pickering said Russia’s assertive actions in Ukraine and Syria were rooted in a desire of Kremlin policymakers to “regain [global] stature” that had been lost with the 1991 collapse of the Soviet empire. He also noted the concept of “personalismo” – the shaping of policy to conform to the particular views of a leader, in this case Putin – also was playing a major role in guiding developments.

It is the personalismo element that seems to be vexing the US policy establishment the most because the will of an individual does not always follow reason or prompt one to do what is in the best interests of the state. Russian foreign policy seems based more on “stratagems, than strategy,” Pickering said, adding that it was hard to determine whether Putin was acting as an “intelligence officer” or a “statesman.”

It would seem in the interests of Russia, for example, to work with the United States on preventing Russian citizens from traveling to Syria in order to join Islamic State or other radical elements there, CIA Director John Brennan noted in his keynote speech at the Washington security forum.

But Brennan tacitly acknowledged that US-Russian cooperation on the Islamic State issue is not anywhere near what it should be, and no breakthroughs seemed imminent.

“We’ve been exchanging information,” said Brennan, sounding more frustrated than optimistic. “I think it needs to be enhanced.”

“Irrespective of disagreements of policy over Syria, I am determined to work with other country services the best I can in order to prevent successful terrorist attacks,” Brennan added.

Pickering said a “central feature” of Russia’s overall foreign policy approach was “ankle-kicking” the United States whenever it got an opportunity. And there is no indication that such behavior will change.

A belief seems to be taking hold in the American foreign policy and security communities that only tougher measures against Russia can moderate Kremlin behavior.

At the conference, Pickering suggested the United States should think about providing friendly armed groups in Syria with anti-aircraft missiles to help defend them against Russian attacks. That proposal conjured images of the proxy war the United States fought in Afghanistan by providing Stinger missiles to Afghan mujahedeen forces that were resisting the occupying Red Army. US officials have criticized the Russian military intervention in Syria, saying Russian air raids have targeted mainly moderate, US-supported groups fighting to oust President Bashar al-Assad, instead of hitting Islamic State targets.

“I know this gives people the shivers,” Pickering said of the missiles-to-Syrian-rebels idea. He later emphasized that such a plan would have to be accompanied by strict controls to prevent the advanced technology from falling into Islamic militant hands.

While the Stinger II proposition was perhaps the most provocative idea aired at the security conference, it was not the only confrontational tactic that was floated. Paula Dobriansky, a top US diplomat during the George W. Bush administration, suggested that sanctions against Russia could be tightened to target its energy production and export infrastructure. She also said that “it’s not a question of if, but how” to base US and/or NATO troops in Poland and the Baltic states.

Meanwhile, Daniel Kurtz-Phelan, a former aide to then-secretary of state Hillary Clinton and currently a fellow at the New America Foundation, urged the United States to undertake a more comprehensive effort to bolster Ukraine’s sovereignty.

Pickering additionally mentioned a need for an information initiative that would break the virtual information monopoly inside Russia currently enjoyed by Kremlin-controlled media outlets. “We need to find a way … to get through to the Russian people,” he said.

Even as he spoke about the seeming likelihood of a more confrontational atmosphere, Pickering stressed the need to keep a US-Russian dialogue open to prevent any possible miscalculation from turning into something much worse, such as a potential nuclear standoff. Reinvigorated talks on nuclear arms reduction would be a way to keep channels of communication open, he said. In some areas, he added, cooperation was still possible, and both sides should look for “win-win opportunities.”

“We need to plan for the worst and hope for the best,” Pickering said.

Justin Burke is the Managing Editor of EurasiaNet.org.

Memoir | 9/11: The American discovery of Tajikistan