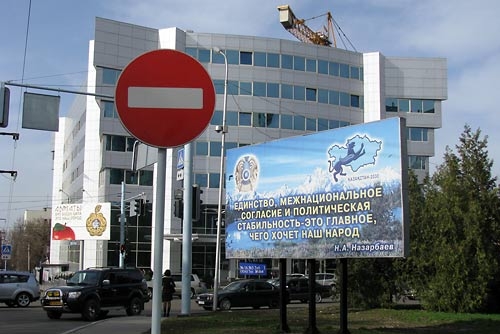 A billboard in Almaty reads, "Unity, interethnic accord and political stability - this is the main thing our people want." (Photo: Joanna Lillis)

When President Nursultan Nazarbayev proposed drawing up a doctrine to promote national unity, he probably did not expect that he would lift the lid on inter-ethnic tension in Kazakhstan. But that is exactly what happened.

Nazarbayev has often expressed pride in the fact that Kazakhstan is a multi-cultural country that has been able to maintain a high degree of inter-ethnic harmony. [For background see the EurasiaNet archive]. In 2009, the president sought to institutionalize what his administration had long been practicing, and he called on the Assembly of People of Kazakhstan (APK), an umbrella body whose members are presidential appointees representing the interests of Kazakhstan’s various ethnic groups, to develop a National Unity Doctrine.

Presented to Nazarbayev last October, the AKP-produced doctrine envisioned Kazakhstan becoming a multicultural melting pot in which every citizen was first and foremost a "Kazakhstani." It was aimed at "consolidating political stability, unity, and accord," Nazarbayev said.

But it turned out that the document, aimed at fostering accord, touched off a storm of dissension. In a country home to some 130 ethnic groups, the idea of being a "Kazakhstani" made sense to many, but it was a concept not universally applauded. Leaders of Kazakh nationalist movements -- including Dos Kushim of Ult Tagdyry (Fate of the Nation) and Mukhtar Shakhanov of Memlekettik Til (State Language) -- vociferously opposed the proposed doctrine, interpreting it as an attack on ethnic Kazakh identity, language and culture. And turning up the temperature in the debate, they threatened to go on a hunger strike, if the AKP-produced doctrine was adopted.

Meanwhile, opposition political parties, such as OSDP Azat and Ak Zhol, disavowed the doctrine. And together with nationalists groups, opposition parties set out to devise an alternative. The National Unity Blueprint they presented in January differed radically from the APK version. Its central premise was that the titular Kazakhs should be recognized as Kazakhstan’s core group ("the "state-forming nation"), and that other groups should coalesce around the titular nationality. In this formulation, the opposition-nationalist version co-opted language that Nazarbayev had often used in the past, namely the president’s frequently used characterization of Kazakhs as Kazakhstan’s "state-forming nation."

The authors of the alternative document wrote to Nazarbayev on February 8, setting out their own vision of national unity: "The basis of this document is, firstly, the recognition of the Kazakh nation as state-forming; a rejection of the idea of a ’Kazakhstani nation;’ the unification of all the republic’s citizens under the banner of the Kazakh nation; raising the level of the Kazakh language to the de facto state language and turning it into a factor uniting all ethnic groups." They also wanted the country’s name changed from the Republic of Kazakhstan to the Kazakh Republic.

This row quickly exposed some latent tensions that form an awkward backdrop to the official line that Kazakhstan is a model of ethnic harmony.

Nationalist leaders contended that the state’s espousal of equality for all groups was coming at the expense of the ethnic Kazakhs’ assertion of their identity. Ethnic Kazakhs in Kazakhstan were assiduously assimilated into Russian culture during the Soviet era, nationalists recalled. Kazakhs numbered less than half the country’s population in 1991, when Kazakhstan gained independence amid the Soviet Union’s collapse. At the same time, the Russian language had become so prevalent that some ethnic Kazakhs no longer spoke Kazakh at all. Kazakhs now comprise roughly 63 percent of the country’s population.

The discussion about unity thus touched a sore point. "The argument that ’Kazakhstan is indigenously Kazakh land’ is an argument that cannot be avoided," Mukhtar Tayzhan, president of the Bolatkhan Tayzhan Foundation, told a round table in Almaty, held in February at the Institute of Political Solutions (IPS).

He said this argument was an emotional one, but "the emotions of the people cannot be disregarded, because ordinary [ethnic Kazakh] people understand the situation precisely in those terms." Tayzhan is among those who say state policy is skewed toward minorities at the expense of the majority. Ethnic Russians are the largest minority, accounting for roughly 24 percent of the population; no other group forms more than 3 percent of the population.

Others argued that the nationalist approach is discriminatory. The IPS’s Irina Chernykh voiced the sense of exclusion that the idea of Kazakhs as the core group can engender. "I feel offended when I am called a Russian, when I am called the Russian diaspora, when I am excluded from the ’state-forming nation,’" she told the round table.

APK representatives said they were taken by surprise by the controversy. Deputy Chairman Aleksandr Dederer accused some parties in the debate of "shaping their efforts in the form of proposals and initiatives that have nothing in common with the formation of national unity."

"They propose a revisionist path -- essentially a rollback from the level Kazakhstani society has grown to," Dederer said in comments published in the Strana i Mir newspaper on March 20.

In February, the IPS published the results of a poll that examined public attitudes on inter-ethnic relations. The survey among 2,300 people in 16 towns and cities showed that the percentage of individuals characterizing relations between ethnic groups as friendly was -- at 39 percent -- lower than the administration would like the outside world to believe. Just under half (46 percent) saw certain problems, from detachment or strained relations among ethnic groups to outright hostility (reported by a tiny 0.7 percent).

The poll showed most people rejecting the idea of ethnic Kazakhs having a special role: 31 percent backed the concept, but 60 percent supported the idea that all citizens should thought of as "state-forming." Just one in five people supported changing the official name of the country.

After several months of acrimony, the opposing sides got together to harmonize their respective programs. On April 29, Yeraly Tugzhanov, head of the working group in charge of reworking the blueprint, announced that a new National Unity Document had been agreed upon and approved by Nazarbayev. The new unity blueprint incorporated over 500 proposals from nationalist leaders, political parties and academics. Dosmukhamet Nurakhmet, head of the National Patriotic Movement of Kazakhstan, expressed satisfaction that the nationalist viewpoint had been taken into account.

The latest version of the document envisions Kazakhs "becoming a consolidating center of unification of the nation," under the principles of "one country - one fate," "different origin - equal opportunities" and "development of the national spirit." The process of promoting national unity may have been more protracted than originally anticipated, but it also showed that political dialogue can produce positive results in Kazakhstan.