At Last Minute, Armenia Drops Out of NATO Exercises in Georgia 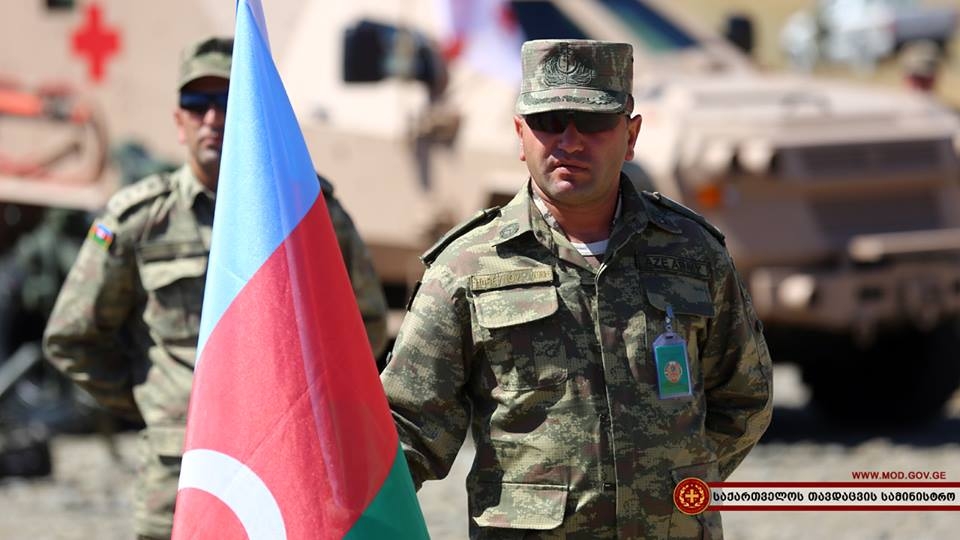 An Azerbaijani soldier takes part in the opening ceremony for NATO exercises in Georgia, after Armenia unexpectedly dropped out. (photo: MoD Georgia)

At the last minute and with no explanation, Armenia has dropped out of NATO military exercises in Georgia, after taking part in several other drills with the Western alliance this summer.

Georgia's Ministry of Defense announced just before the start of the exercise, on September 3, that Armenia had decided not to go. “Armenia was due to participate in the military exercises, but unfortunately it abandoned that intention a few days before their start,” a spokesman for the Georgian Defense Ministry told RFE/RL's Armenian service on September 3. “I don’t know what the reason for that is.”

Armenia's participation was to be only symbolic: three military medics. But it was symbolic of Yerevan's desire to balance out its close ties with Russia. An analysis on Armenia's participation, published before the dropout on August 31, headlined: "Armenia deepens cooperation with NATO: How will Russia react?" concluded:

In Moscow, of course, they are reacting with envy and resentment to Yerevan's getting closer to the European Union and NATO... But on the other hand, as a result of Russia's increasing isolation from the civilized world, it doesn't have the resources to make a significant impact on Armenia's politics -- moreover, the provision of Russian weapons to Azerbaijan is legitimizing Armenia's turn to the West.

That may have been premature. Armenian officials, asked about the unexpected dropout, didn't do much to dispel the impression that it was the result of Russian pressure.

"This is a sovereign decision of Armenia," said Eduard Sharmazanov, the vice speaker of Armenia's parliament, on September 4. "Armenia never said it was going to be a member of NATO even in the distant future, never said it was going to leave the [Russia-led security bloc Collective Security Treaty Organization]. Armenia has always said that it sees no alternative to the CSTO."

He continued: "It would have been strange had Armenia not participated in CSTO or Armenian-Russian exercises. Armenia is a CSTO member and has a clearly defined military-political orientation."

Armenian Deputy Defense Minister Artak Zakarian, on the other hand, tried to downplay the move. “Armenia never officially stated that it will definitely participate," he told reporters. “In any activity, certain revisions are always possible ... You should not see anything extraordinary in that.”

Adding to the intrigue, Azerbaijan is participating in Agile Spirit, after itself dropping out unexpectedly from two other NATO exercises earlier this summer. In keeping with its very low profile of NATO cooperation, it hasn't even announced its participation, though there is some photographic evidence. Azerbaijani's news agency APA, in a September 1 preview of the exercises, reported that Armenia -- but not Azerbaijan -- was taking part.

The exercises are part of a massive series of NATO drills around the Black Sea in which about 40,000 soldiers are participating. In Agile Spirit, about 500 United States Marines are taking part, along with 1,000 other soldiers from Georgia as well as Bulgaria, Latvia, Romania, and Ukraine.