Authoritarians double down on media repression amid COVID-19, says watchdog

In keeping with a historical pattern, many Eurasian states could be found near the bottom of the index. 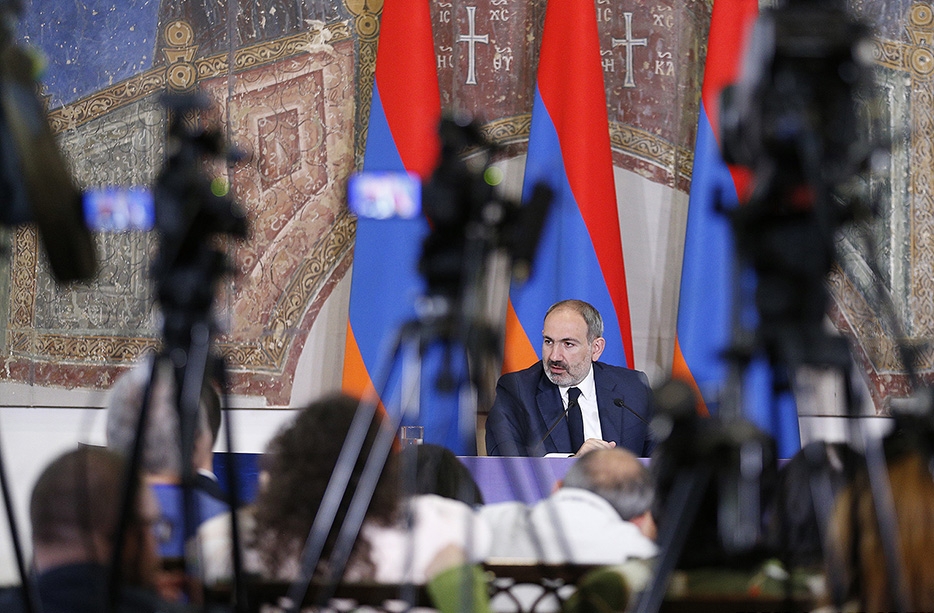 The Index was released amid a media controversy in Armenia, as senior executives at Armenian public television resigned after footage of President Nikol Pashinyan coughing spread on the Internet. (primeminister.am)

Gurbanguly Berdymukhamedov, Turkmenistan’s authoritarian leader, has been dethroned as the world’s foremost press bully. The 2020 Press Freedom Index, compiled by the watchdog group Reporters Without Borders, has North Korea snatching the crown from 2019 titleholder Turkmenistan as the globe’s worst offender when it comes to the repression of journalists and the free flow of information.

Turkmenistan did not make gains, however.

The Reporters Without Borders index rated 180 countries on governmental practices concerning press freedom. In keeping with a historical pattern, many Eurasian states could be found near the bottom of the standings.

Citing China and Hungary as particularly egregious examples, Reporters Without Borders found that many authoritarian-leaning states are using the COVID-19 pandemic to double down on repression. The suppression of critical information about the coronavirus is compounding the economic and social consequences of the pandemic, suggested the organization’s secretary-general, Christophe Deloire.

“The coronavirus pandemic illustrates the negative factors threatening the right to reliable information, and itself is an exacerbating factor,” Deloire said in a statement. “What will freedom of information, pluralism and reliability look like in 2030? The answer to that question is being determined today.”

The Caucasus region was somewhat of a bright spot for press freedom in Eurasia: Georgia and Armenia were the highest ranked formerly Soviet states outside of the Baltics, coming in at 60th and 61st respectively. Azerbaijan, meanwhile, was deemed one of the world’s dark spots for press freedom, ranking 168th. In Georgia and Armenia, the polarization of media outlets was highlighted as a problem, as was interference in press coverage by the owners of various outlets.

“Media diversity has blossomed, but the government that emerged from Armenia’s ‘velvet revolution’ in the spring of 2018 has failed to reduce the media’s polarization,” the index noted.

The Index was released amid a media controversy in Armenia, as senior executives at Armenian public television resigned after footage of President Nikol Pashinyan coughing spread on the Internet.

In Central Asia, Uzbekistan has leapfrogged Kazakhstan in the rankings. Uzbekistan, which under former dictator Islam Karimov was widely seen as one of the most repressive states on earth, has implemented reforms that enabled it to move up four spots to 156th. Kazakhstan, long Central Asia’s economic engine, but which has experienced backsliding on individual rights in recent years, came in one spot behind at 157th.

The index noted that Kazakhstan had improved in some areas, while adding that “the state is modernizing methods of repression, and, in particular, exercising more control over the Internet, where surveillance is now widespread.”

Kyrgyzstan ranked highest in Central Asia at 82nd, while Tajikistan, which has yet to officially register a single COVID-19 case, is among the bottom-dwellers at 161st.

In its country report on Russia, the index stated that “as TV channels continue to inundate viewers with propaganda, the climate has become very oppressive for those who question the new patriotic and neo-conservative discourse, or just try to maintain quality journalism.”

In assessing Ukraine, Reporters Without Borders lauded the country’s progress in diversifying and opening up its media sector since the 2014 Euromaidan Revolution. However, “these gains are fragile,” it added.