Azerbaijan airs grievances to U.S. and France after Karabakh snub

The U.S. embassy’s decision not to visit Shusha followed soon after its reappointment of a representative to the Minsk Group, a body Baku has declared “dead.” 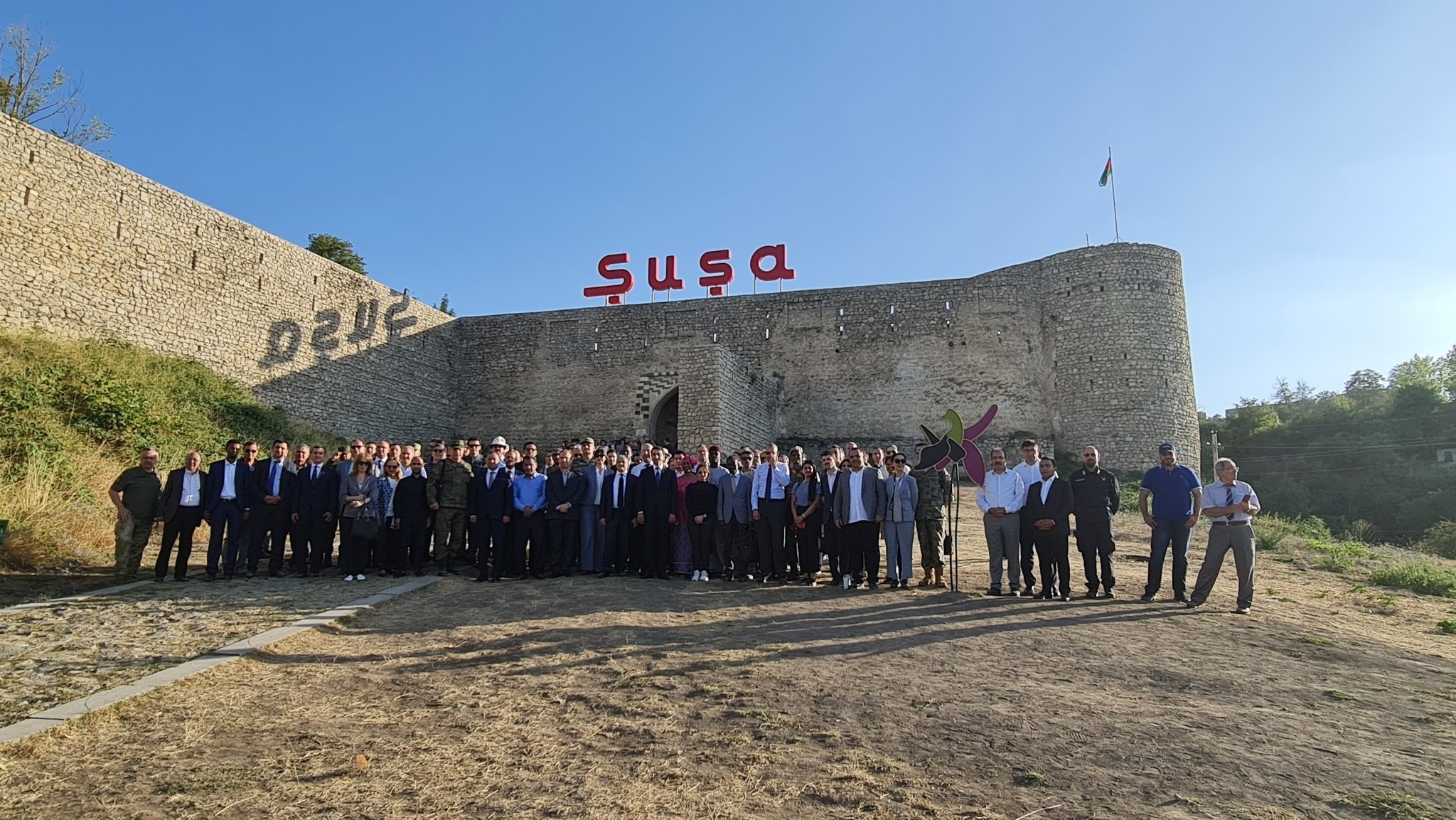 Azerbaijan has criticized the United States and France after the two embassies declined an invitation to a state-sponsored conference in Nagorno-Karabakh.

The August 27 conference on Azerbaijan’s reconstruction efforts in Karabakh was held in Shusha, the key town that Azerbaijan regained in its 2020 war against Armenia and which has since become a showpiece for Baku’s rebuilding campaign in the territory.

In attendance were representatives of most of the foreign embassies in Baku, Azerbaijani officials reported, but there were two notable exceptions: envoys from Paris and Washington.

The absence was conspicuous. “Our diplomat colleagues and friends can’t contain their amazement when they see these reconstruction projects accomplished in a short period by Azerbaijan,” Hikmet Hajiyev, the chief foreign policy adviser to President Ilham Aliyev, told reporters after the event. “But there are two states that do not participate [in such events] once again, which I want to especially note: the U.S and France.”

The American and French embassies also skipped a similar event in July 2021, and it was noticed by official media. A report on public television showed other diplomats eating bread that had been baked in a new bakery in Shusha, with the presenter noting in the voiceover: "But some who ate Azerbaijan's bread for 30 years and contributed nothing to resolution of the Karabakh conflict also didn't stand by Azerbaijani society on a remarkable day like this."

“The ambassadors of the U.S. and France ostensibly refuse to visit Shusha despite repeated invitations. This should be seen as disrespect for the territorial integrity of Azerbaijan,” Hajiyev said.

The snubs were particularly pointed given the key role the U.S. and France have played in the region: Along with Russia, they are the co-chairs of the OSCE Minsk Group, a body created in the 1990s to manage the resolution of the Karabakh conflict.

Russia also skipped the July 2021 event, and it wasn’t publicly announced whether a Russian diplomat attended this conference. But the Russian ambassador did visit Shusha in July. Elshad Pashasoy, a journalist at the pro-government newspaper Yeni Musavat, wrote on Facebook that Russia had thus “washed away its sins” from the last event. One source told Eurasianet, on condition of anonymity, that a Russian diplomat did attend the recent Shusha conference.

In the wake of the 2020 victory, Aliyev has repeatedly mocked the Minsk Group as irrelevant and declared it “dead.” Azerbaijan considers the body’s main task – to help work out a resolution of the status of Nagorno-Karabakh – to have been solved on the battlefield, and that Karabakh’s status is now an integral part of Azerbaijan with no special status for its ethnic Armenian population.

While the body has indeed been weakened following the war – “perhaps terminally,” scholar Laurence Broers wrote – many of its participants have tried to keep it alive. Most recently, on August 24, the U.S. appointed a new representative to the Minsk Group, a relatively senior diplomat, Philip Reeker.

In his Shusha comments, Hajiyev referred to Reeker’s appointment. “Appointing someone as co-chair of the Minsk Group after 30 years of unsuccessful activity is nothing but shameful,” he said, criticizing attempts to “resuscitate” the body. “The city of Shusha does not need them,” he added, referring to the ambassadors.

Asked about Hajiyev’s remarks, the U.S. embassy in Baku issued a statement to Voice of America’s Azerbaijani service expressing support for Azerbaijan’s “sovereignty and independence,” and mentioned other trips around the region that embassy officials have taken.

“The personnel of the United States Embassy have made and continue to make extensive visits to all regions of Azerbaijan, including Aghdam, Zangilan and Fuzuli,” three regions that also were retaken by Azerbaijan in the 2020 war. The statement did not mention Shusha at all, implicitly drawing a distinction between those other regions (which were outside the borders of the Soviet-created Nagorno-Karabakh Autonomous Oblast) and Shusha, which was in Nagorno-Karabakh proper.

As of the time this post was published, Baku had not responded.