The memorandum is a win for Baku while committing it to do little. 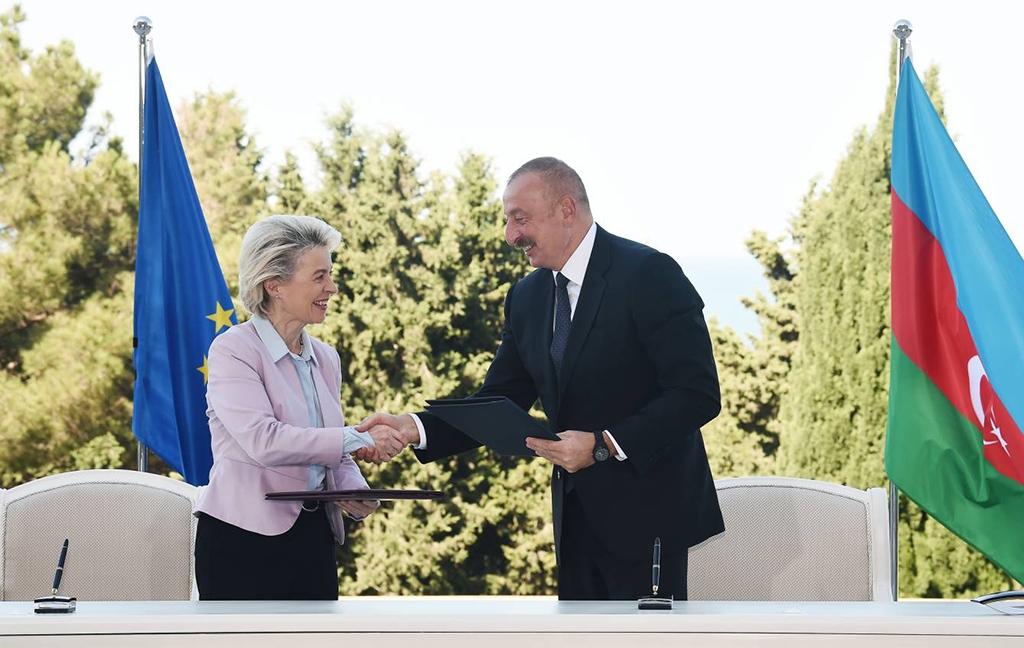 The European Union is hailing a new energy agreement with Azerbaijan that could see the gas-rich Caspian nation double the flow of gas to Europe in five years, part of Brussels’ effort to reduce reliance on Russia.

After the July 18 signing ceremony in Baku, Azerbaijani President Ilham Aliyev and European Commission President Ursula von der Leyen both stressed their commitment to strengthening and broadening collaboration in energy and other areas.

“Cooperation in the field of energy has always been at the top of our agenda," said Aliyev. “We are interested in expanding cooperation in education, transportation and all other areas."

For her part, von der Leyen said that with the new memorandum of understanding, the EU is "opening a new chapter in our energy cooperation with Azerbaijan, a key partner in our efforts to move away from Russian fossil fuels."

EU Commissioner for Energy Kadri Simson confirmed that under the memorandum Azerbaijan is "expected" to deliver an extra 4 billion cubic meters (bcm) of gas to the EU this year (bringing the total to 12 bcm) and to increase transfers to "at least" 20 bcm by 2027.

Despite the upbeat comments, the six sections of the five-page MoU are little more than a wish list of what both sides would like to see happen, given the right circumstances.

Short on details, the bulk of the document restates the EU's commitments and hopes regarding climate change and reducing greenhouse gas emissions. It includes broad suggestions of cooperation with Baku in renewable energy, energy efficiency and production, and the transit of "green hydrogen."

The only significant concrete proposal was the suggestion that Azerbaijan could double its gas exports to the EU by 2027.

That though is presented in the MoU as far short of a commitment. Both sides, it says, "aspire to support bilateral trade of natural gas, including through exports to the European Union, via the Southern Gas Corridor, of at least 20 billion cubic meters of gas annually by 2027, in accordance with commercial viability and market demand."

The statement is further tempered in the final article, which says that nothing in the MoU "… should create any binding legal or financial obligations" and that the MoU "does not constitute an obligation to allocate funds."

Such a frank "get out clause" is hardly unusual.

Azerbaijan's gas fields and the chain of pipelines that carry the gas through Georgia and Turkey to Greece – where some goes to Bulgaria and the bulk to Albania and across the Adriatic to Italy – are controlled by multi-party international consortia.

It is the companies comprising these consortia that will decide whether to invest the billions of dollars necessary to increase gas production and expand pipeline capacity.

Talks between the various partners on realizing that investment are believed to be under way.

With Europe eager to wean itself off Russian gas, and no end in sight to Moscow’s war on Ukraine, there seems little doubt that the consortia can sell all the gas they can transit.

But energy analysts are asking a more fundamental question: Can Azerbaijan provide? The country has limited scope for increased production and has its own growing demand to meet.

Late last year, to prevent domestic shortages, Baku reached a swap agreement to import gas from Iran, which in return receives the same volume from Turkmenistan.

BP, operator of Azerbaijan's biggest gas field, Shah Deniz, has warned that the field cannot supply all the gas needed to double exports to Europe, while other smaller fields under development are not expected to produce sufficient quantities.

For many years officials have discussed Azerbaijan transiting gas from its Caspian neighbor Turkmenistan, which holds the world's fourth-largest reserves.

Turkish Vice President Fuat Oktay announced on June 2 that Ankara is looking at three ways of bringing gas from Turkmenistan to Turkey via Azerbaijan. One would expand the existing Turkmenistan-Iran-Azerbaijan swap, another would see a new pipeline cross part of the Caspian.

Turkey's intentions, though, are still unclear. Oktay confirmed only plans to bring the gas to Turkey via the Southern Gas Corridor; he made no mention whether it will then be transited to Europe and if so on what terms.

Baku too has remained quiet on the Turkish proposals. Aliyev's statement following the MoU signing suggested Baku is more interested in securing EU help to boost its renewables program to free up more of its own gas for export.

One thing, however, is abundantly clear: With Europe fearing that Moscow could stop its 150 bcm of gas deliveries as soon as this winter, an extra 10 bcm from the Caspian in five years will make little difference.