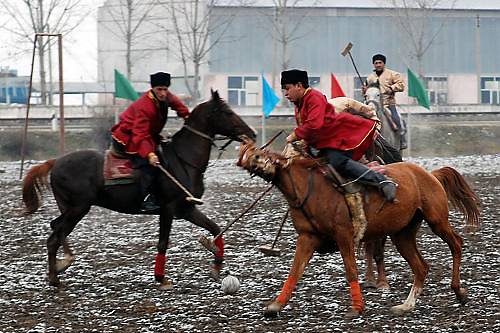 Azerbaijan and Iran have tussled over weighty issues relating to religion and energy development in the Caspian Sea in recent years. And now they’re haggling over ponies.

The neighboring states can’t see eye to eye when it comes to the origins of chovgan – the Eastern, polo-style game that UNESCO recently deemed an “intangible world heritage” closely connected to Azerbaijan.  Azerbaijan’s first lady, Mehriban Aliyeva, a UNESCO Goodwill ambassador, reportedly worked hard behind the scenes to promote chovgan’s cause among UNESCO officials.

At first glance, chovgan doesn’t seem much of a cause for an international spat. It is not a professional sport, and it has no cache among the jet-set. Horse-riding instructors make up most of Baku’s two teams; farmers often fill the ranks of regional teams.

Overall, about 20 teams in Azerbaijan compete in the sport, with matches often drawing only sparse crowds. With 12 players to a side, it has only a few differences from polo – its ball is larger and the 150-to-200-meter-long playing field is sandy rather than grass. Players wear traditional clothes rather than white breeches; and chovgan matches last just 30 minutes, with one 10-minute break.

It is chovgan’s similarity to polo, and that sport’s affiliation with the rich and powerful around the world, that is apparently a factor in the Iranian-Azerbiajani dispute.

Movers and shakers in Baku seem to believe that UNESCO recognition can provide Azerbaijan with entrée into the world of polo. Chovgan players will make up Azerbaijan’s new national polo team – the country joined the International Federation of Polo on December 7 – local coaches say. The team played a friendly match with Argentina’s polo team in October.

“Polo is a modernized and, I would say, more civilized form of chovgan,” said 48-year-old Shukur Valiyev, coach of Baku’s Serhedchi (Border Guard) team, and a prominent chovgan player from the Soviet era.

That Azerbaijanis are now trying to cast their country as the cradle of polo, and that is raising hackles in Iran. Many Iranians believe the game’s origins are found in Persian, rather than Azeri lands. In October, the Islamic Republic announced a campaign against including chovgan on the UNESCO list as an “Azerbaijani game.” Lately, Tajikistan, a Central Asian country with Persian cultural influences, has entered objections as well.

Baku, having become accustomed to criticism from its southern, fellow Shi’a neighbor, are adopting a somewhat conciliatory course, acknowledging that the sport is not Azerbaijan’s alone. “Chovgan is popular in all countries of the East,” said Azerbaijani Culture and Tourism Minister Abulfaz Garayev said at a December 3 news conference.

Iran’s zeal for chovgan must be aimed at “the development of the game,” Garayev reasoned, generously. “I do not think that small misunderstandings could harm the friendly relations between Azerbaijan and Iran.”

Chovgan isn’t the only cultural area that has spurred bilateral sparring. Currently, the countries are disputing the origins of the legendary 12th-13th-century poet Nizami Ganjevi, who lived in the central Azerbaijani city of Ganja.

Chovgan’s Turkic origins – the game mostly has been played in Turkic countries -- are plain to Fizuli Bayat, a scholar at Azerbaijan’s National Academy of Sciences’ Folklore Institute. Fragments from ancient Azerbaijani miniatures and one 11th century vessel portray the game, which is also mentioned in the Turkic epic Kitabi Dede Korkut. Historical manuscripts describe its rules.

“It was also played in Iran and India, but by the Turkic population in these lands,” Bayat said. Similar games with different names are played in Afghanistan and the Balkans, he added. Azerbaijan’s northern neighbor Georgia itself has a chovgan-like game called isindi, Valiyev noted.

Azerbaijan evidently feels that UNESCO recognition can also help promote its political agenda. As advertisements broadcast on CNN and Euronews indicate, chovgan may serve as a PR tool in the country’s efforts to focus international attention on the long-stalemated Nagorno-Karabkah conflict.

A distinctive feature of the sport, according to Azerbaijan’s UNESCO application, is its reliance on a short-legged breed known as the “Karabakh horse.”

“Due to the Karabakh conflict, this sport is endangered,” declared Culture and Tourism Minister Garayev. “The population of Karabakh horses is not growing.”

Work on preserving the mild-mannered Karabakh horse is centered in the northern town of Sheki, which hosts two annual chovgan tournaments, including a December 16 “presidential cup” competition involving 16 teams.

Aside from Sheki, a nine-time national chovgan champion, a team from the Azerbaijani-controlled section of the occupied Agdam region, neighboring Karabakh, is another top-ranked contender. The northwestern town of Agstafa, not far from the Armenian border, ranks as the current champion.

While Baku and Tehran may be arguing over chovgan, they are planning to join forces to have another sport – zorkhana, a type of wrestling – recognized as an Olympic sport.

In October, Iranian Ambassador Mohsen Pakayin met with local zorkhana participants to discuss recognition efforts, Trend news agency reported. "Zorkhana is the shared cultural heritage of Azerbaijan and Iran,” Ambassador Pakayin said. “This sport contributes to the rapprochement not only of the two countries, but also of the two nations.”

No joint application has been filed yet to have the sport considered by the International Olympic Committee, according to one informed source. The sport, though, is expected to feature in the 2017 Islamic Solidarity Games, to be held in Baku.