Azerbaijan and Russia could coordinate gas supplies to Europe – Aliyev

President Ilham Aliyev's visit to Moscow days ahead of Russia's invasion of Ukraine appears to have resulted in an agreement not to compete with one another on gas exports. 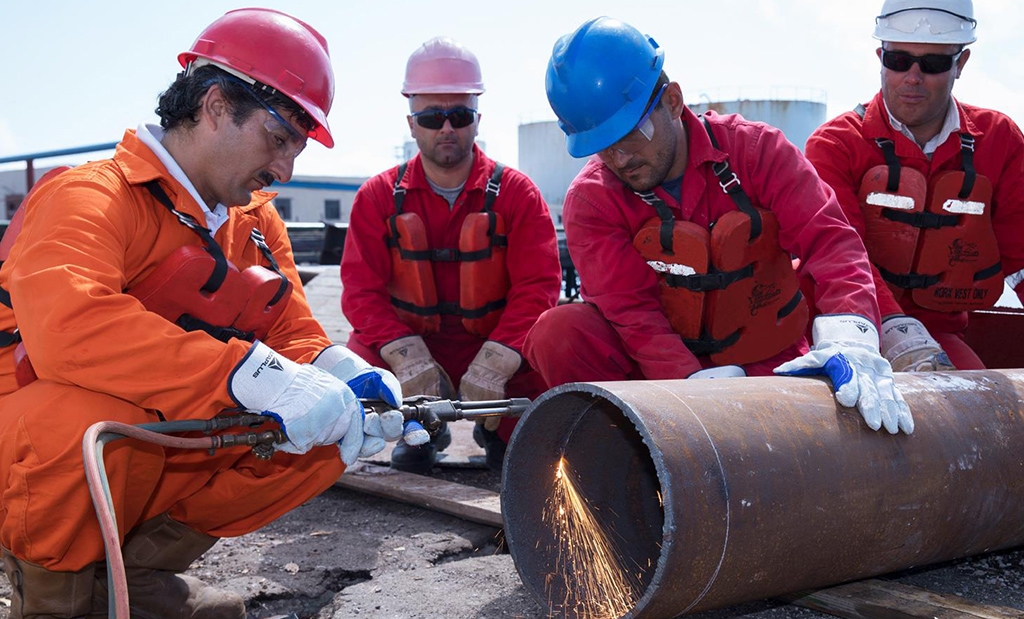 Whether or not Aliyev carries through on his promise to coordinate with Moscow, Russia is in any case set to play an increasing role in the Azerbaijani gas industry. (SOCAR)

As economic warfare between Russia and the West deepens, will Azerbaijani gas play a role?

Azerbaijan President Ilham Aliyev paid a visit to Moscow in the days just ahead of Russia’s invasion of Ukraine. And while the headline news from the visit was the signing of a new alliance agreement, less notice has been paid to comments Aliyev made about the new partnership’s implications for the two countries’ natural gas exports.

On February 23 – the day before the invasion was launched – a Russian reporter asked Aliyev whether Azerbaijan is ready to increase supplies to the European market and, if so, by how much.

Aliyev responded that the investments needed for such an increase take a long time to come to fruition. Azerbaijan had only started making exports to Europe little over a year ago, he continued, pointing out that investments for that had begun four or five years previously.

But he then added: “I think that active cooperation between Russia and Azerbaijan is also possible in terms of coordinating our efforts so that we clearly understand, as they say, the volumes we can sell … so as not to create problems for each other.” While the volumes Azerbaijan can export are small compared to Russian exports, they could still compete with one another, and Aliyev said he didn’t want that to happen.

"Even small volumes can sometimes make a difference in the gas market. In order to avoid this, we are ready and are working with the Russian side in this direction," he said.

The comments came shortly after other senior officials were speaking to Europeans in a different tone. As the Ukraine crisis mounted, and Russia threatened to cut gas supplies to Europe if the West imposed sanctions, the European Union approached Azerbaijan in an effort to persuade Baku to boost gas exports as a potential substitute for Russian gas. Azerbaijan’s ambassador to the UK gave a January 28 interview to Bloomberg saying that Azerbaijan was interested, while cautioning that it would be a long-term process, not a short-term fix.

Since the invasion kicked off, there has been no further comment from either Baku or Moscow on the issue. Aliyev spoke with Russian President Vladimir Putin on February 27 and according to the official readout, “the presidents discussed the situation amid the escalation of events in Ukraine, as well as issues related to Russian-Azerbaijani relations.”

Moscow also has not followed through yet on its threat to cut off gas supplies to Europe, even as international sanctions against Russia pile up.

But Aliyev's comments – which are backed by language in the formal Azerbaijan-Russia agreement – appear to pour cold water on those earlier European hopes.

“It looks particularly ominous that the agreement states that both countries agree to 'refrain from carrying out any economic activity that causes direct or indirect damage to the interests of the other Party’," John Roberts, a Caspian energy expert and senior fellow at the Atlantic Council, told Eurasianet.

"Azerbaijan has always tried to avoid characterizing the energy relations with Russia from a zero-sum standpoint and the stark difference in volumes has been their main argument," Rauf Mammadov, an energy analyst and founder and principal of the Eurasian Energy Chamber, told Eurasianet.

"It is the circumstances that have changed radically, not Azerbaijan’s position," Mammadov said.

Whatever the aim of the new agreement with Azerbaijan, or the timing of its signing, it was followed by a visit to Moscow by Turkmenistan Foreign Minister Rashid Meredov, during which he signed a “roadmap for cooperation on regional security issues.” The next day Russian tanks rolled into Ukraine, a move neither Aliyev nor Meredov appeared to have been briefed on.

"It looks like Putin was trying to cover both his Caspian flanks in the run-up to the invasion," Roberts said.

Both Caspian states will likely now be less keen to be seen cozying up to Moscow, and Baku may want to appear as if it is making efforts to expand its exports to Europe.

That won't be easy.

Developing new gas fields, boosting production from existing ones, and building or expanding pipelines to carry the gas to market takes years of planning and billions of dollars of investment, which can be made only if guarantees exist years in advance that the gas can be sold.

Whether or not Aliyev carries through on his promise to coordinate with Moscow, Russia is in any case set to play an increasing role in the Azerbaijani gas industry.

Then, on February 18, Lukoil nearly doubled its stake in Azerbaijan's giant Shah Deniz gas field – which provides the bulk of Azerbaijan's export gas – and the South Caucasus Pipeline (SCP), which carries that gas as far as Turkey, from 10 to 19.99 percent.

The timing of that purchase is likely coincidental, stemming as it does from the decision last year by Malaysia's Petronas to sell its 15.5 percent share in Shah Deniz.

Lukoil had sought Petronas’s whole stake, but Baku restricted it to just 9.9 percent. BP and SOCAR increased their stakes to ensure that the joint Azeri-BP share totaled 51 percent, keeping ultimate control in Baku.

On top of that, Lukoil also is the leading contender to become the operator of the joint Azeri-Turkmen Dostlug oil and gas field, which promises to kick-start long-mooted plans for a trans-Caspian gas pipeline to carry Turkmen gas across the Caspian and possibly on to Europe.

These moves aren’t political per se. Lukoil already operates several major oil fields in the Russian sector of the Caspian, and some suggest the company's interest in other areas of the basin is purely commercial.

"Lukoil's intensified activity in Azerbaijan is mainly driven by the reprioritization of the company's investment portfolio [...] and a transition to less carbon-intensive assets, particularly gas," Mammadov said.

Others, though, suggest that the company’s increased presence will inevitably boost the influence of the Russian firm. Roberts noted that gas from the Dostlug field will likely be transited across the Caspian using pipeline infrastructure belonging to Azerbaijan's giant BP-operated ACG oil field. The gas would necessarily be processed at Azerbaijan's Sangachal gas terminal, before being fed into the SCP.

"Having such a large stake in Shah Deniz gives Lukoil a pretty loud voice in access to the Azerbaijani facilities used to process gas for export," Roberts said.

Others go further, warning that Lukoil's position in so many Azeri projects gives the company access to information that could be used against Baku's interests.

"They will have access to all the data on the markets Azeri gas is being sold to, the customers, the prices, the volumes as well as details of flow rates, maintenance plans and any shutdowns – all very useful information for a competitor," one former senior official from the Turkish gas sector told Eurasianet on condition of anonymity.