The exercises took place at a time of heightened Baku-Moscow tension. 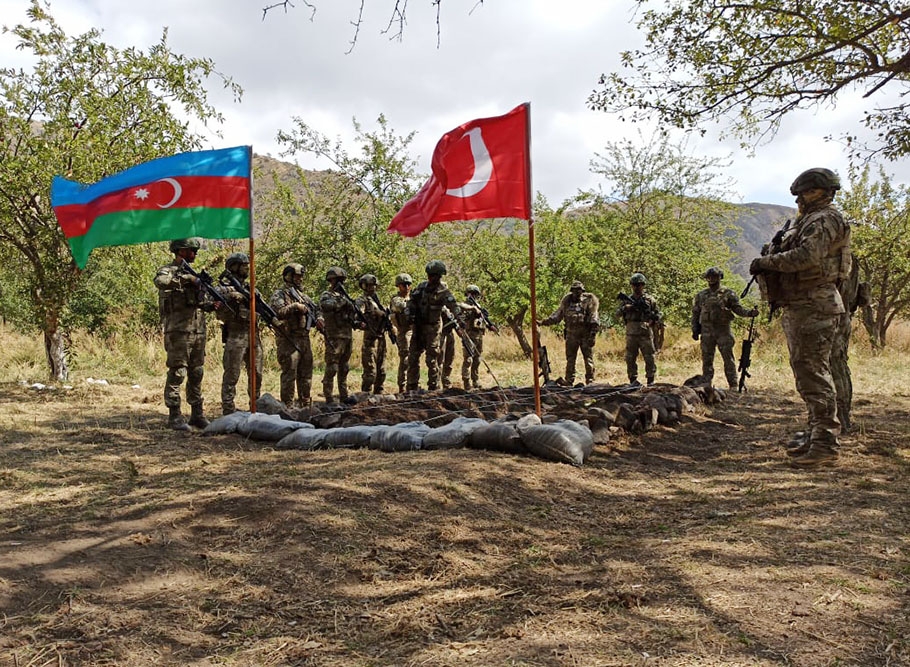 Turkish and Azerbaijani soldiers have conducted joint military exercises in Azerbaijan’s Lachin region, a stone’s throw from Russian peacekeepers, amid heightened tension between Baku and Moscow.

The exercises, which concluded on September 10, appeared small-scale; neither side released figures indicating how many troops took part, but official photos and videos of the drills showed only very small units. The troops involved were special forces and the scenarios included “conducting reconnaissance in difficult terrain, setting up ambushes on the roads, detecting and destroying sabotage groups in the area, as well as secretly approaching the imaginary enemy by overcoming various obstacles,” according to a release from Azerbaijan’s Ministry of Defense.

But their significance was in the apparent political message they sent. They marked the first time that Turkish troops have openly deployed in the territories that Azerbaijan retook from Armenia during last year’s war. (There were many reports of Turkish advisers and drone operators aiding Azerbaijan during that war, but neither side has acknowledged the presence of those forces. Following the war, a number of Turkish drone operators deployed to a joint Russian-Turkish observation mission in the Aghdam region.)

“These exercises are unique in that they are taking place in the liberated Azerbaijani territories in immediate proximity to the area of operations of the Russian peacekeepers,” said Azad Isazade, an analyst and former Azerbaijani MoD official, in an interview with the news website Caucasian Knot. “This shows that Turkey remains committed to its support and defense of Azerbaijan.”

Azerbaijani analysts also linked them to recent reports that Armenian armed forces had deployed to Nagorno-Karabakh via the Lachin corridor and were involved in an exchange of fire with Azerbaijani forces; Azerbaijan in August formally demanded that Russia put a stop to the Armenian deployments. (For its part, Russia reported that the troops involved were those of the unrecognized Nagorno-Karabakh Republic; a spokesperson for the Armenian Ministry of Foreign Affairs did not respond to a request for clarification from Eurasianet.)

“The fact remains that military personnel and supplies are being deployed to Karabakh under the escort, or perhaps sponsorship, of the Russian peacekeepers,” said another analyst interviewed by Caucasian Knot, Telman Abilov. “If this continues, then Azerbaijani units will have to stop this ‘transit’ themselves.”

At the end of August, Azerbaijani forces blocked a critical road connecting the major cities of southern Armenia and effectively blocking Armenia’s transit with Iran. Two days after the blockade ended, Russian peacekeepers announced that they were conducting exercises aimed at “preventing violations by drones of a potential enemy and ensuring security of the observation posts on the Lachin corridor.”

“In other words, the Russian peacekeepers’ exercises in the Lachin corridor can be seen as a message to the Armenian public about their readiness to defend the corridor,” wrote another analyst, Farhad Mammedov, for the news website Haqqin. “Now, Azerbaijani and Turkish special forces have set up camp near the corridor and are starting exercises. Turkish-Azerbaijani units are working on joint military actions in mountain conditions, testing out modern military technology. Against the background of the events of recent days, these joint exercises are a special warning…” he concluded.

While Azerbaijani media heavily covered the exercises, the coverage from Turkey was understated. No officials made statements about the drills and the military only acknowledged them with a single social media post.

In Armenia, the exercises were seen as a provocation. The drills “are harmful to the moves toward de-escalation and are incompatible with the spirit of the November 9 ceasefire statement and undermine efforts to establish lasting peace, security and stability in the region,” Armenia MFA spokesperson Vahan Hunanyan said in a statement.

“It is the sovereign right of every state to conduct various exercises in the territory within its international borders,” his Azerbaijani counterpart Leyla Abdullayeva responded. “Azerbaijan has conducted numerous military exercises on its territory, including joint exercises with the participation of partner countries. The joint tactical training launched in Lachin region is of similar origin and serves to ensure peace and stability in the region.”

Armenian analysts surveyed by Caucasian Knot put the exercises in the context of a wider array of aggressive moves taken by Azerbaijan in recent months. “The exercises are considered to be a real threat, a demonstration of force and intimidation,” analyst Andrias Ghukasyan said.

Meanwhile, these weren’t the only joint Azerbaijan-Turkey exercises taking place. In the same week, joint naval special forces drills took place along the shoreline of the Caspian Sea, while joint air exercises were conducted in Konya, Turkey.

Turkey also announced a number of appointments of senior officers to Azerbaijan-related positions, including the commander of a hitherto-unknown entity called the "Azerbaijan Operational Group." That name was used in previous discussions involving the deployment of a Turkish military contingent to Azerbaijan, reported the independent Azerbaijani news agency Turan. While such a deployment has yet to take place, "the disclosure of the names of these generals, as well as the very fact of the 'Azerbaijan operational group' is intended to show that this issue has not been removed from the agenda," an "informed source" told Turan.