While the hydrocarbon field that Baku and Ashgabat will jointly develop isn’t itself a gamechanger, it could finally open up Turkmenistan’s massive gas reserves for European markets. 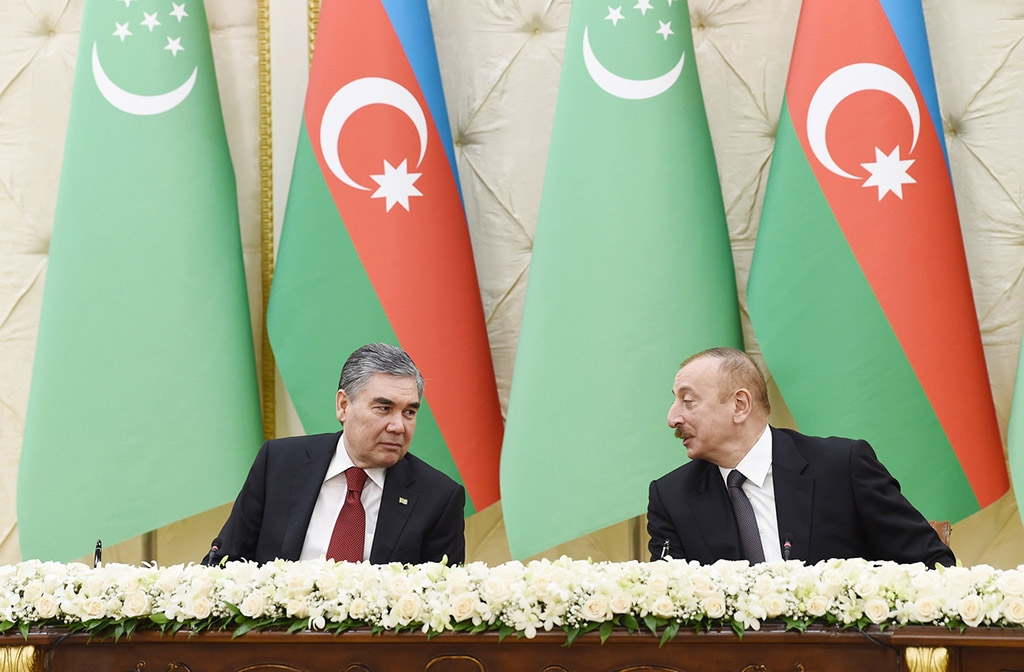 Berdymuhamedov and Aliyev: The beginning of a beautiful dostluk (president.az)

Azerbaijan and Turkmenistan have signed a landmark agreement to jointly develop a long-disputed Caspian gas field, a move that could pave the way for the transit of Turkmenistan's massive gas reserves to Europe.

On January 21, Azerbaijan President Ilham Aliyev and Turkmenistan President Gurbanguly Berdymukhamedov signed a memorandum of understanding, via videoconference, on joint exploration of the hydrocarbon field now known as "Dostluk" or "Dostlug" – “friendship” in their respective languages.

Formerly known as “Kyapaz” in Azerbaijan and “Sardar” in Turkmenistan, the field on the maritime border between the two states has been under dispute since the two countries gained independence from the Soviet Union three decades ago. A series of United States diplomatic cables, released by Wikileaks, detailed how the dispute had devolved in 2008 into personal insults between the two leaders and gunboats harassing oil exploration vessels.

But all that appears to be in the past with the signing of the new agreement.

In itself, Dostluk is not particularly significant. Azerbaijan’s state oil company SOCAR has suggested it is comparable to the “Karabakh” field it is already drilling, which is expected to produce around 21 million tons of crude oil and around 13 billion cubic meters of gas.

As such, it will be a welcome source of new revenue for the two countries, both of which have been hit hard by the fall in global oil and gas prices amid the COVID-19 pandemic. But it won’t be a gamechanger.

Far more significant is the political agreement, which marks an important first step towards further agreements which could change the regional energy picture and help Turkmenistan’s gas finally reach Europe.

"News on the development of a joint exploration of the Dostluk field indicate that there is the intention to establish some kind of trans-Caspian dialogue for Turkmen-Azeri oil projects," Luca Anceschi, lecturer in Central Asian Studies at the University of Glasgow, told Eurasianet.

"Development of Dostluk should give Turkmenistan a modest new revenue stream, but more importantly it also opens up the prospect of a direct gas connection between the two countries, which would prove more lucrative, and have far reaching significance," regional energy analyst John Roberts of the Atlantic Council told Eurasianet.

With such an abundance, Turkmenistan could be rivalling the world's biggest gas exporters like Russia, Qatar and Norway. Instead, landlocked in Central Asia, it has until now had only limited opportunities for monetizing its reserves and no opportunity to export gas to lucrative European markets.

A pipeline to carry Turkmenistan’s gas across the Caspian Sea to Azerbaijan and onward to Turkey and Europe was planned in the late 1990s, sponsored by a consortium of Shell, Bechtel and GE. But that project collapsed following the discovery of Azerbaijan's huge Shah Deniz gas field, after which it became more expedient for Baku to develop and export its own reserves.

But with Baku and Ashgabat now apparently reconciled and working together, things could change.

The two main pipelines which make up the corridor – the TANAP pipeline through Turkey and the Trans Adriatic Pipeline across Greece, Albania and the Adriatic Sea to Italy – currently operate at only half capacity, and the full route could easily be expanded to carry gas from Turkmenistan, assuming no new Azerbaijani gas fields come on stream in the meantime.

But making Turkmenistan’s gas available for export is only half the story, and questions remain about European demand. The CEO of the TANAP operating company, Saltuk Duzyol, said during a January 14 webinar that any expansion of the pipeline would happen only if gas were available at one end the pipeline and a market for the gas existed at the other.

For now, Europe enjoys access to more gas than it needs, the bulk of it supplied by Russia, which has itself been aggressively developing new Europe-bound pipelines in an effort to discourage potential rival suppliers and secure its position as the continent’s dominant provider.

In the face of such competition, the future of any Turkmenistan gas exports to Europe is likely to lie in Brussels and the extent to which the European Union is prepared to push the development of a Trans-Caspian gas pipeline and wean itself off of its dependence on Russia.

With additional reporting by Peter Leonard.