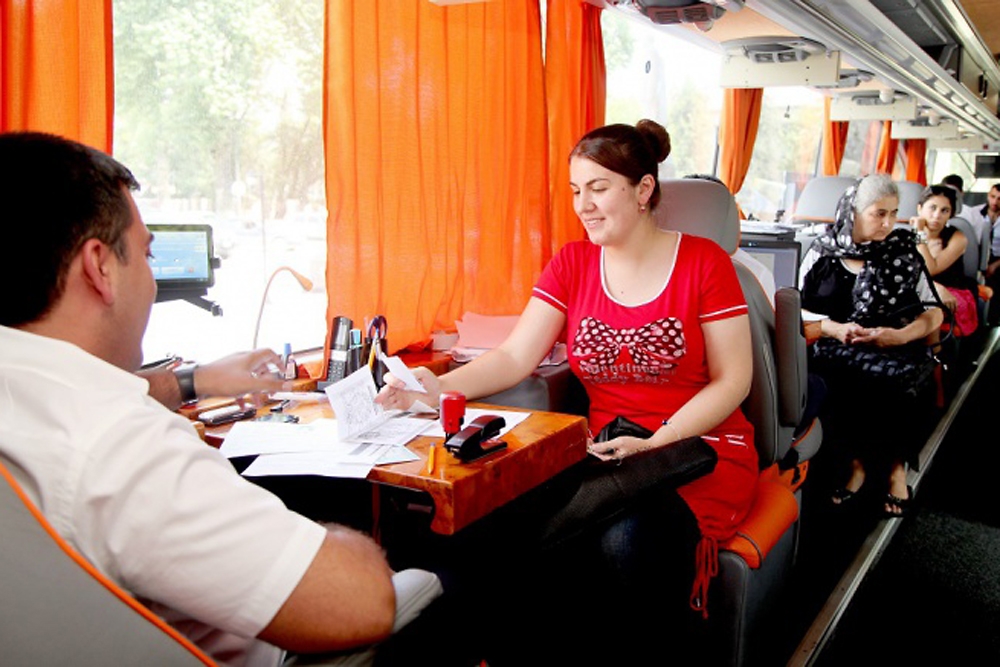 An initiative in Azerbaijan to curb corruption is drawing some positive reviews from citizens, but watchdog groups indicate the scheme has not yet had a significant effect on reducing graft.

Azerbaijan has long had a reputation for being the most corrupt country in the South Caucasus. In 2013, a non-profit media organization, the Organized Crime and Corruption Reporting Project, even named Azerbaijani President Ilham Aliyev corruption’s “person of the year.”

In an effort to improve the country’s corruption image, Azerbaijani authorities launched in December 2012 an initiative to open one-stop centers for government services under the auspices of the State Agency for Citizens’ Services and Social Innovations (ASAN). These so-called ASAN centers were designed to provide “citizen satisfaction” with interactions with civil servants, and “to enrich the quality” of those exchanges. Reading between the lines, enriching the experience meant checking the ability of bureaucrats to solicit or demand bribes.

As in neighboring Georgia, which also runs a network of such one-stop facilities, Azerbaijan’s six ASAN centers let users take care of scores of bureaucratic tasks, ranging from birth registrations to renewals of driver’s licenses, at one place, with one clerk. To discourage bribery no payments are made at ASAN centers; visitors can pay official fees online, at pay-point kiosks or at a post office.

“I felt like Alice in Wonderland. No joke. It is amazingly good,” commented 40-year-old project coordinator Sabuhi Gafarov, who visited an ASAN center in the Azerbaijani capital, Baku, for the first time this June to get passports for his three children. “If I was told two years ago about having such a public service in my country, I would never have believed it.”

Forty-two-year-old Baku resident Narmin Afandiyeva, who recently visited an ASAN office to renew her driver’s license, claimed that if she had gone to the old agency that handled such renewals, she would have had to pay 120 manats (roughly $153) in bribes. At ASAN, she paid only the official price, 18 manats or about $23.

The anti-corruption watchdog Transparency International’s National Integrity Assessment Report 2014 cited ASAN centers as contributing to modest progress that has been made in reducing petty corruption over the past few years.

Currently, there are six ASAN centers in operation: four in Baku and one each in Sumgayit, located just outside the Azerbaijani capital, and the central city of Ganja. An additional four ASAN centers are scheduled to open by the end of 2014 in the provincial cities of Barda, Gabala, Masala and Sabirabad, said ASAN spokesperson Anar Huseynov.

While many citizens report positive experiences, such anecdotal evidence has not yet translated into significant improvements in surveys conducted by watchdog groups. In 2013, Azerbaijan ranked 127th out of 177 countries surveyed for public corruption in an index compiled by Transparency International. Azerbaijan’s 2013 performance marked a 12-point improvement from the previous year, but its general score remained relatively unchanged at 28 out of 100, a poor result that put Azerbaijan on par with Russia.

A separate 2014 TI report identified “major weaknesses” in Azerbaijan’s system as the lack of any “practical application of the principles of accountability, transparency and integrity” by both the government, and “watchdog pillars” such as media or civil society as well. Transparency in Azerbaijan has even taken a major step backwards in recent months, amid a far-reaching government crackdown on civil society activists.

For some Azerbaijani citizens, the centers’ level of performance raises a vexing question; if the government can succeed in this sphere, why cannot it streamline bureaucratic processes across the board? Ministries continue to provide the same services as those available at ASAN centers – a duplication that, at first glance, appears pointless. The government has never explained the reason for this duplication, nor, for that matter, has it made public the amount of money spent on the ASAN centers.

For Farid Guliyev, an Azerbaijani doctoral candidate in political science at Germany’s Jacobs University Bremen, the reason behind this “double bureaucracy” is simple. “A smart ‘solution’ afforded by the oil boom was to supplement, but not reform, the old system with a ‘pocket of efficiency,’” Guliyev said. “This solution keeps the old bureaucrats in place, and also improves the provision of services.”

Ultimately, “the ASAN network enables the government to create the impression that it is fighting corruption, and encourages popular support for President Ilham Aliyev’s administration,” reasoned Guliyev.

Alimammad Nuriyev, the head of the Constitution Research Foundation, a Baku-based non-profit think tank, suggested that ASAN centers, by creating competition with traditional government ministries, can ultimately serve as an agent of change.

“It is not easy to implement reforms in a country like Azerbaijan where government institutions, in many cases, reject policies of change. That is why, first, there should be established a new model of governance.”

Not wanting to be eclipsed by ASAN centers, some ministries appear to have improved their work performance, according to anecdotal evidence.

ASAN visitor Gafarov noted that he had expected “bribery and bureaucracy” when he visited the Interior Ministry’s passport office this summer to pick up a new passport. He claims, though, that he observed the same quality of service as found at ASAN centers.

“I kind of feel proud that we finally have an office that serves citizens so well,” he said in reference to ASAN centers.

Opposition leader Natig Jafarly similarly applauded the ASAN initiative. But he contended that the agency’s success only underlines the government’s failure to conduct broader civil service reform. “Those public services offered by ASAN also still largely remain in state institutions,” he noted. “The government does not want to abolish them because it needs to keep a huge army of public officers loyal to its regime.

For some Azerbaijani citizens, ASAN centers foster resentment by highlighting shortcomings in other areas. The relative efficiency of the ASAN centers “makes me angrier,” said Vafa Zeynalova, a 30-year-old accountant in Baku. “I know that it was established not to serve the people, but [to enhance] the prestige of the government.”