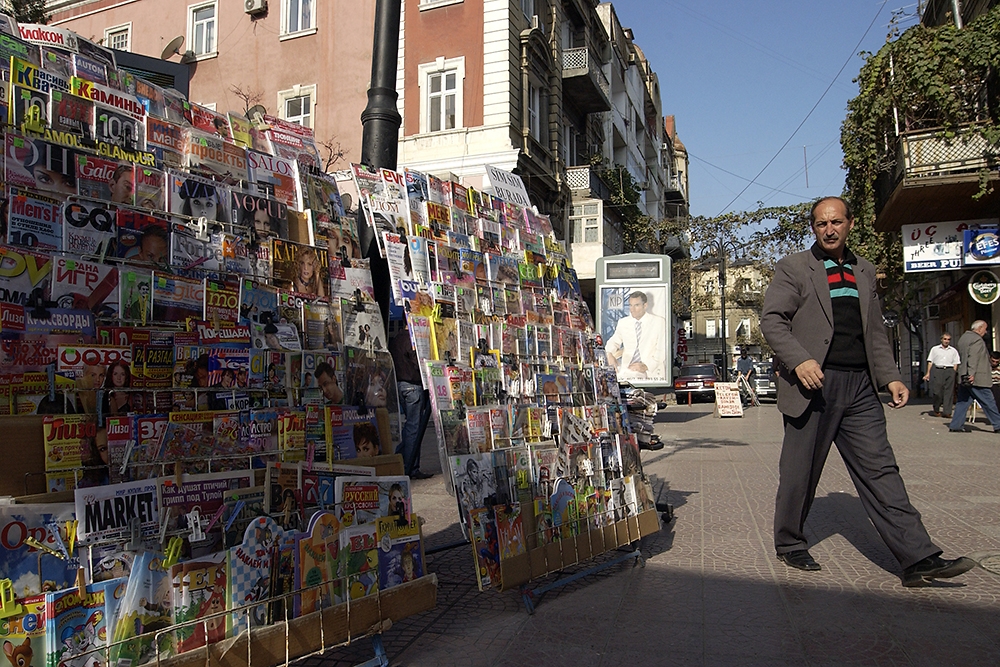 The media climate is growing so grim in Azerbaijan that some observers are reminded of an old Soviet-era adage that just about the only safe topic for public discussion is the weather.

A government crackdown over the past year, carried out in the wake of the Euromaidan revolution that toppled the government in Ukraine, has muzzled independent voices and public critics of President Ilham Aliyev’s administration in Azerbaijan.

The crackdown is continuing unabated. Earlier in January, the alternative news site Mediaforum.az announced its closure. It blamed complicated new requirements for receiving grants; rules, it alleged, had prevented the site from receiving financing.  The online entity Channel 13, which once posted some 15 video stories a day, also has shut down.

“Our bank accounts were frozen and we could not receive money from our donors,” Channel 13’s former general manager, Anar Orujov, told EurasiaNet.org. “We had to stop working.” Orujov now studies abroad.

Other outlets have been forced to close offices in Baku and shift operations outside Azerbaijan.

One of the main sources of in-depth news about Azerbaijan, the US-government-funded Radio Free Europe/Radio Liberty (RFE/RL), now covers the country only out of its headquarters in Prague. In late December 2014, representatives of the general prosecutor’s office raided and shut RFE/RL’s Baku bureau. Some 40 reporters were forcibly detained and interrogated without the presence of a lawyer.

Prior to the closure of RFE/RL’s bureau, Berlin-based Meydan TV, an outlet known for outspoken criticism of the Aliyev administration, opted to close its own Baku office in an effort to shield its reporters from official harassment.

The action against RFE/RL followed the December 5 arrest of RFE/RL investigative reporter Khadija Ismayilova on charges of inciting an attempted suicide. [Editor’s note: Ismayilova also has worked for EurasiaNet.org]. Ismayilova and international media watchdogs maintain the arrest was politically motivated. On January 27, a court extended Ismayilova’s pre-trial detention by two months, until April 5.

Officials and government supporters dispute the notion that the Aliyev administration strives to cut off the free flow of information. Zahid Oruj, an unaffiliated MP who tends to support ruling Yeni Azerbaijan Party positions, insisted that foreign-funded media organizations such as RFE/RL do not enjoy a sufficient level of popularity among Azeri listeners to be a concern to the government. Oruj also claimed that the new restrictions on foreign financing for non-governmental organizations are intended to promote transparency.

Meanwhile, at a recent  news conference in Berlin, President Aliyev declared that freedom of speech in Azerbaijan is “guaranteed 100 percent.”

To buttress their claims, Aliyev and others point out that roughly three-quarters of Azerbaijan’s 9.42 million citizens have Internet access. Outside reports on Azerbaijani media, however, contend that while greater freedom exists in social media, residents outside of urban centers still have relatively limited access to the Internet. And prosecution for criticism of the government, even on social media networks, is an ever-present risk.

Despite the inhospitable operating environment, Mehman Aliyev, director of the Turan news agency, a regular government critic, holds out hope that free speech will prevail. Azerbaijani citizens widely use social media to share the views of those who think independently from the government, he noted. A video of expatriate Azerbaijani blogger Habib Muntazir shouting in Berlin at President Aliyev, calling on the president to free political prisoners is one case in point.

“There will be new alternatives to emerge,” predicted Turan’s Aliyev. Closing the country’s “information space” will “not be possible.”

While the Internet may indeed be untamable, that is not stopping the government from trying to harness it, according to independent political analyst Zardusht Alizade. “There are lots of new websites that have emerged and are mostly funded by the government itself to fill in the information gap and manipulate public opinion,” Alizade said. The government’s goal with these websites, he claimed, is “to manipulate information as was done during the Soviet era.”

Under the circumstances, Internet-borne rumors can sometimes gain the currency of news. This trend is particularly noticeable concerning developments on the frontline separating Azerbaijani and Armenian forces, said Aynur Elgunesh, a journalist who is now at Meydan TV after working for 17 years in Azerbaijani print media. Although a ceasefire technically governs the Nagorno Karabakh conflict, Armenian and Azerbaijani troops routinely engage in firefights along the frontline.

“Rumors from the frontline have become, I’d say, more credible for readers than [reports from] news media,” said Elgunesh.

Nargiz Rashid is a pseudonym for a freelance journalist who specializes in covering Azerbaijan.