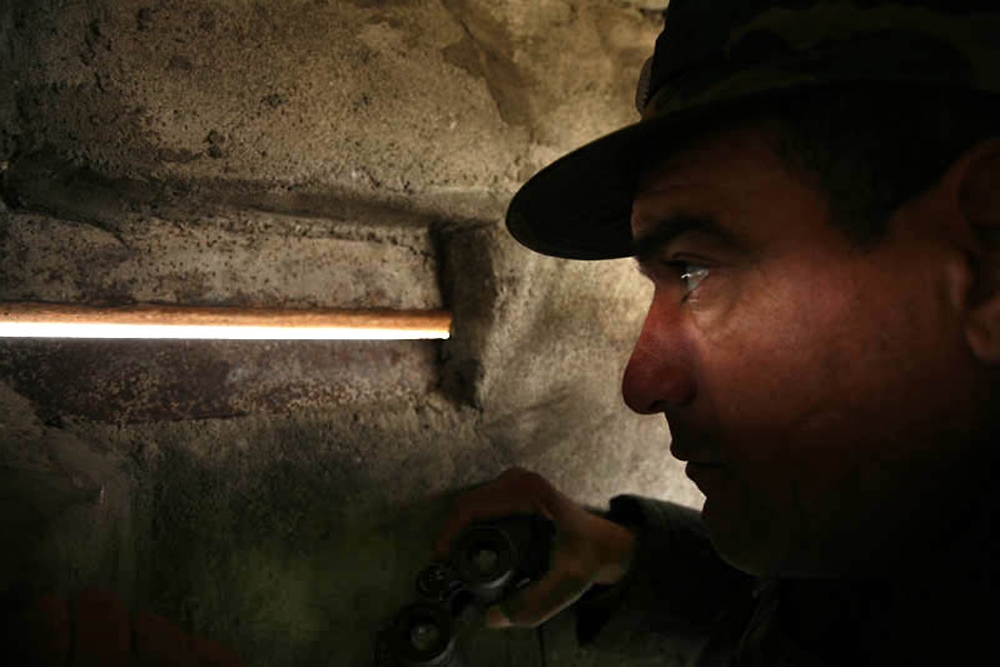 During recent clashes at two locations along the ceasefire line, Azerbaijan says six of its soldiers were killed, and Armenia says it lost four soldiers. (Photo: Justyna Mielnikiewicz)

Did Armenia and Azerbaijan make war in early June to promote peace? Some analysts believe the recent sharp escalation of violence along the Nagorno-Karabakh contact line was specifically intended to get international mediators’ attention.

Political experts in both countries say US Secretary of State Hillary Rodham Clinton’s June 4-6 visit to the South Caucasus was the catalyst for the bloodiest fighting around Karabakh in recent memory. Azerbaijan claimed to lose six soldiers and Armenia four. The two countries signed a ceasefire in 1994, ending six years of conflict over the Karabakh enclave. The two armies have continued to snipe at each other for the past two decades, as negotiations on a lasting political settlement remain stalemated.

The escalation turned the 24-year Karabakh conflict into the main topic of public interest during the US secretary of state’s visits to Yerevan and Baku, with residents on both sides at times swept up by rumors about an impending resumption of all-out warfare.

Analysts in Baku maintain that the flare-up in fighting during Clinton’s tour was not a mere coincidence, but a "message" to Washington that the Nagorno-Karabakh conflict is not frozen and that greater American attention to the problem is needed. "Clinton was shown [by both sides] that it is an unresolved conflict and could escalate at any time," said independent military expert Jasur Sumarinly.

“Vladimir Putin was never interested in this conflict, and I do not think it will change,” commented Vafa Guluzade, a former senior foreign policy aide to the late Azerbaijani President Heydar Aliyev. “Plus, there are reasons to believe that Putin’s position will be pro-Armenian. Therefore, Baku needs more US involvement in the process.”

Russia’s military ties to Armenia underline that impression. On June 10, Interfax news agency reported that Russian fighter jets had increased by 20 percent their training missions over Armenian airspace. In addition, Russia keeps thousands of troops stationed in the northern Armenian town of Gyumri and also monitors the country’s borders.

Sumarinli believes that the flights indicate that Russia is trying to show Azerbaijan that Armenia will not be alone if war in Karabakh resumes. “It puts Baku into a difficult situation,” he said.

Difficult, maybe: but Baku still feels it can push back against Moscow. In what was perceived as a jab at the Kremlin, Azerbaijani Deputy Prime Minister Ali Hasanov drily commented on June 8 that “probably some countries which patronize Armenia were not happy with the visit of the US secretary of state and organized” the cease-fire violations, Azerbaijani news outlets reported.

The Karabakh peace process is guided by the OSCE Minsk group, which comprises representatives from the United States, Russia and France. Diplomats from all three states expressed concern about the early June outbreak of violence.

Analysts in Armenia agree that the cease-fire violations occurred because of Clinton’s presence in the region, though they attribute the outburst of violence to Azerbaijan alone. “The incidents at the frontline were the Azerbaijani government’s action to demonstrate their disagreement with the status quo,” asserted military expert Sergei Minasian, deputy head of the Yerevan-based Caucasus Institute’s Political Studies Department. Armenian forces continue to occupy approximately 20 percent of Azerbaijan’s internationally recognized territory, in addition to controlling Karabakh proper.

For Yerevan, Russia’s involvement in the conflict resolution process is much more important than that of the United States, Minasian continued. “Taking into account the fact that Russia and Armenia are military allies and members of the CSTO [Collective Security Treaty Organization], Russia … unlike the United States, may have a restraining role in this matter, which is preferable for Armenia.”

Baku political analyst Elhan Shahinoglu is doubtful that the recent ceasefire violations will lead to bolder US involvement in the peace process. "Obama's administration has never paid much attention to the Karabakh problem,” said Shahinoglu, who heads Baku’s Atlas Research Center. “I do not think it will change if Obama is re-elected this year.”

Secretary of State Clinton stated in Baku that new proposals for a Karabakh settlement would be presented at a June 18 meeting in Paris between Armenian Foreign Minister Eduard Nalbandian and Azerbaijani Foreign Minister Elmar Mammadyarov.

Analysts in both countries scoff at the notion that the existing deadlock in negotiations will be broken any time soon. “We can expect no miracle,” commented independent political analyst Yerevand Bozoian. “Armenians and Azerbaijanis have different visions for the Karabakh conflict settlement. … In fact, this issue has no resolution, whatever proposal may be put forward."