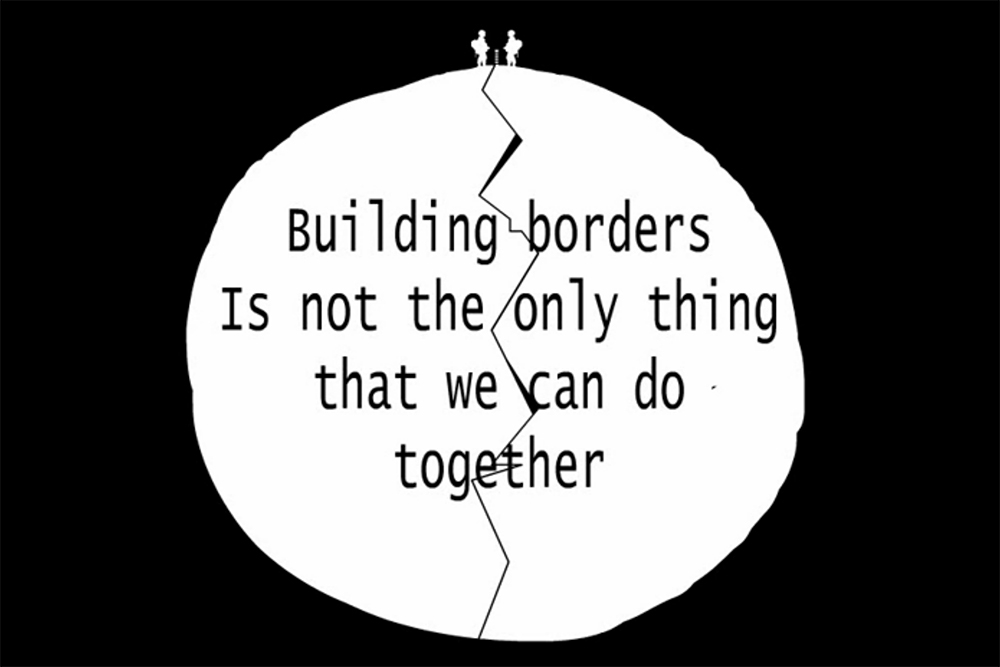 For both Azerbaijani and Armenian peace activists, the resumption of fighting over breakaway Nagorno-Karabakh last week meant a severe test of their stated commitment to peaceful conflict resolution. Now, with calls for retribution running strong on both sides, many question whether the differences between the two countries can ever be bridged.

The deaths of scores of civilians and soldiers in the April 2-5 violence have made persisting with calls for dialogue nearly mission impossible, they say.

Within Armenia, outrage runs particularly strong over the alleged slaying of three civilians in the Karabakhi town of Talish, unconfirmed claims of alleged atrocities against Karabakhi fighters and the supposed beheadings of three Armenian soldiers. The Azerbaijani government has denied the allegations and laid some of its own against the Armenian army.

Thirty-nine-year-old Vahe Nersesian, an Armenian film director who has made pro-peace cartoons with an Azerbaijani colleague, believes that the charges against Azerbaijan mean further dialogue will no longer work. “A dialogue assumes two parties, and if there is nobody on the opposite side, it’s useless to think about such things,” he said.

Nonetheless, 30-year-old Armenian PR specialist Shushan Hovhannisian believes activists must persist.
“I don’t believe we can achieve great changes given the current mood, but in any case, these programs are important because networks are established and discussions are held,” said Hovhannisian, who started attending reconciliation events in 2008. “It’s hard to say whether all this can produce deep changes or not.”

Azerbaijani political scientist Vugar Adigozelov, 24, who has participated in several peace-building events, doubts the effectiveness of any person-to-person peacemaking amidst the current tensions. “The peace-building projects will bear fruit only after resolution of the conflict,” and the return of Karabakh and seven adjoining territories to Azerbaijani control, he underlined. “At present, these types of projects have no effect on the [peace] process.”

Adigozelov blames the “ineffectiveness” of the 24-year-long negotiations between Azerbaijan and Armenia, supervised by the Organization for Security and Cooperation in Europe’s Minsk Group, for the fresh flare-up in violence.

Contacts between ordinary Azerbaijanis and Armenians long have been seen as one way around any diplomatic impasses.

In Azerbaijan, amidst a crackdown on those who challenge the government, many of the organizations that once took part in citizen diplomacy no longer function fully.

In Armenia, the Eurasia Partnership Foundation has been one of the most active organizations trying to build contacts with Azerbaijani society, including via joint documentaries and cartoons, trainings, conferences and talk shows. The Foundation’s programs director in Yerevan, Isabella Sargsian, maintains that, even amidst the recent violence, the measures had an effect.

“If we look at the posts in social networks, the participants of our programs demonstrate a different thinking; they are more informed and mild. Their messages differ in quality,” she noted.

Yet in recent years, no such face-to-face meetings have occurred.

The lack of direct contacts between Azerbaijani and Armenian civil society members has only added to the animosity prevalent now, underlined Artur Sakunts, head of the non-governmental Helsinki Citizens’ Assembly in the northern Armenian town of Vanadzor.

“On the one hand, we should support the victims of the hostilities and their families, and on the other hand, the dialogue between the warring societies should be restored,” he said.

Sakunts’ NGO once organized trips to Armenia and Nagorno-Karabakh for Azerbaijani journalists, civil society representatives, local government officials, and others. But in 2010, that contact ceased, said Armine Sadikian, peace programs coordinator at the Assembly’s office.

“When tensions increased in Azerbaijan, we were no longer able to organize joint programs and summer schools…” Sadikian said. “Then, a situation emerged when we could not put [Azerbaijani participants] at risk any longer, though we understood pretty well that the absence of dialogue would not bring any good results.”

One of the best-known Azerbaijani peace activists, 60-year-old Leyla Yunus, was released from prison in December 2015 after being sentenced to eight-and-a-half years for alleged economic crimes. Now unable to leave the country, she has not commented publicly on the recent violence in the conflict zone.

Ulvi Hasanly, a board member of the Nida Civic Movement, an Azerbaijani youth activist group critical of the government, believes that crackdowns on independent media, civil society (including the arrests of Nida activists) and controls on international and non-governmental organizations have all taken their toll.

“Whoever is talking about peace at such a sensitive time, supporters of the regime call them traitors. In both countries, governments have a bad attitude towards the peace process,” Hasanly said. “Therefore, strategies associated with the peace process in the region have failed.”

The Armenian government under President Serzh Sargsyan, a former head of Karabakh’s military forces, has stopped short of accusing citizen diplomats of espionage, but also has not effusively supported their efforts.

Both governments, though, claim that peace is their first objective. Yet with no huge official enthusiasm for citizen diplomacy, donor funding has sagged, noted EPF’s Sargsian. Relevant donors could not be reached for comment.

“If the authorities are not interested in the development of public diplomacy, it will be difficult to achieve something in the peace-building processes,” Nida’s Hasanly said.

Azerbaijani Bakhtiyar Aslanov, a 29-year-old Internally Displaced Person from the now abandoned town of Fuzuli, near Karabakh, believes, though, that civil society members must take the initiative of restoring dialogue themselves, rather than looking to their respective governments. Aslanov, who runs conflict-research programs for the Humanitarian Research Public Union, a Baku-based NGO, now serves as a Rotary peace ambassador.

The four days of fighting served as a test for the sincerity of peace activists on all sides of the conflict, he said. So far, few have passed.

“It is very easy to be a peace activist during peace or a ceasefire,” he observed. “We have to show our courage and defend our values, which is promotion of peace during a period of war or escalation of the conflict.”

Marianna Grigoryan is a freelance reporter based in Armenia and editor of MediaLab.am. Durna Safarova is a freelance journalist who covers Azerbaijan.