Azerbaijan at Sochi: It’s All About Being There 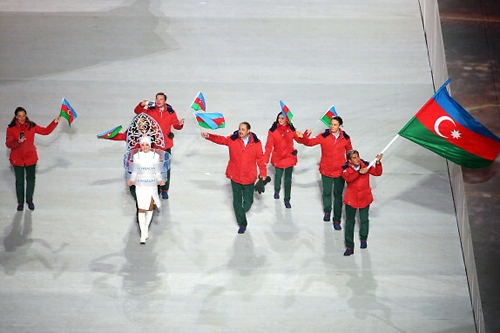 The informal Olympics creed of “Not to win, but to take part” is exactly what Caspian-Sea energy power Azerbaijan wants out of the 2014 Winter Olympics in Sochi.

All four of Azerbaijan’s Olympic team members – alpine skiers Gaia Bassani Antivari and Patrick Brachner, and ice-dancing pair Alexei Sitnikov and Yulia Zlobina -- are naturalized foreigners; the only such team in the Games.

None, as National Olympics Committee (NOC) Senior Vice-President Chingiz Huseynzade admitted to EurasiaNet.org, are expected to win a medal or post noteworthy results. But that does not disconcert NOC officials.

“Here, we proceed with ‘the main thing is to take part’ principle,” Huseynzade said

It’s a principle on which Azerbaijan has been counting since 1998, when it took part in its first Winter Olympics, at Nagano,  with four Russian-born figure skaters. Each winter team since has been made up only of foreign-born athletes.

The pattern, though, does not stem just from a love of participation. Attracting international sports events to Baku, the Azerbaijani capital, is a key goal for President Ilham Aliyev, the head of Azerbaijan’s National Olympics Committee since 1997.

Although the scheduled events to date focus on summer sports – the 2015 European Games and the 2017 Islamic Solidarity Games – the Winter Games, too, present a prime opportunity for Azerbaijan to promote itself in international sports circles.

The NOC has not disclosed how much was paid to this year’s team to appear in Sochi.

Elmir Aliyev, a sports editor for 1news.az, however, believes taking part in Sochi “is the bigger incentive . . . than the financial reward.” All four of this year’s athletes hail from countries with strong winter Olympics teams – and a fierce competition.

Huseynzade blamed Azerbaijan’s climate and topography for its lack of native winter Olympians – an assertion which might be open to debate, given Azerbaijan’s extensive mountains and frigid highland winter temperatures.

Its use of foreign athletes also is not restricted to the Winter Games; four Russians and one Bulgarian won medals for the Azerbaijani team at the 2012 Summer Olympics in London.

“[A]t this stage, the most important thing for us is that the Azerbaijani flag was among other countries in Sochi . . .” Huseynzade said.

Using only imported athletes can lead to certain embarrassments, however. On February 5, Azerbaijan’s team (natives of Austria, Italy and Russia) managed to hang the country’s tricolor flag upside down in Sochi’s Olympic Village. It was a slipup that sparked much hooting among Azerbaijani bloggers. The NOC did not respond.

The mistake, though, marked the most public attention the team has received within Azerbaijan itself. Compared with the London Olympics, when Baku’s sports-bars and cafes were full of spectators, interest in Sochi appears to be running low.

On February 17, Azerbaijan’s Sitnikov and Zlobina finished 12th among 20 ice-dancing pairs, but coverage has been sparse.

On Facebook, those Azerbaijanis with an interest in winter sports tend to focus more on Russia’s 15-year-old gold-medal figure skater Yulia Lipnitskaya or debate the chances of the Canadian, Russian and US hockey teams. Local news coverage looks more at broader issues with the Olympics than the Sochi Games themselves.

Huseynzade, though, emphasizes that Azerbaijan has started developing its own facilities for winter sports, and that “in the future Azerbaijan’s own athletes could participate in the Winter Olympics.”

But, so far, the tangible signs of that development appear limited to the two-year-old Shahdag, the country’s first winter resort, on the border with Russia, and President Aliyev’s opening of a similar resort (Tufan or Storm) in the northern Gabala region this January.

Both resorts are meant for tourists and have no options for professional athletic training.

Sports editor Aliyev predicts that that could change if Azerbaijani interest in winter sports picks up, but does not expect the country to post “serious results in winter sports” over the next few decades.