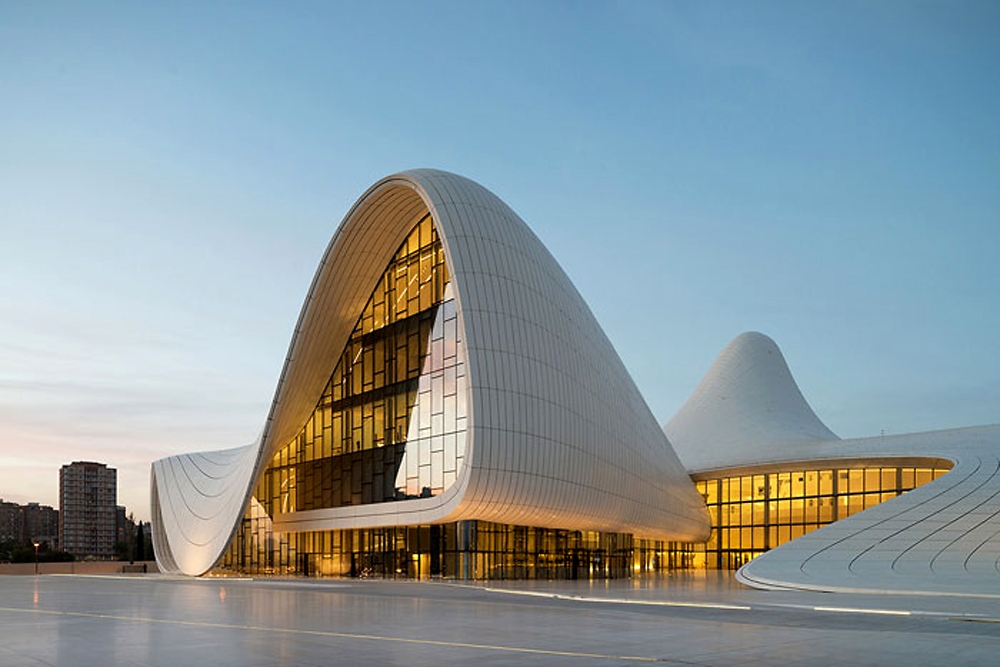 Baku is gaining international recognition as a center of cutting-edge architectural design thanks in part to a major award given recently to London-based architect Zaha Hadid for her Heydar Aliyev center. The Azerbaijani capital’s new look has plenty of local fans, but also some detractors.

London’s Design Museum announced in late June that the Heydar Aliyev center was the recipient of its Design of the Year Award. With its swooping curves, the Aliyev center is certainly eye-catching, but it’s far from the only architectural showpiece in Baku. Over the past decade, the center of the city has been transformed by such projects as a new seaside boulevard, the modernist Crystal Hall and the “Flame Towers,” glass-and-steel skyscrapers made to resemble burning torches. Also in progress is the “White City,” an urban renewal project that aims to transform one of the city’s grimiest areas.

The catalyst for Baku’s architectural makeover is widely reported to be Mehriban Aliyeva, wife of President Ilham Aliyev. She is said to have significant input in all new construction in the center of the city. Aliyeva is known to have a strong affinity for the look-and-feel of Paris, thus it’s not a surprise that Louvre-style pyramids have appeared at the entrance of three metro stations, and Paris-style newspaper kiosks have been installed all over the city. A “Paris Quarter” is also being constructed in the “White City.” Norman Foster is among the architects involved in the White City Project.

Urban renewal often comes with a high human toll, and Baku is no exception. International rights groups, including Freedom House and Human Rights Watch, have documented widespread instances in recent years of forced evictions of local residents to make way for new projects. Protests have occasionally erupted over the forced evictions; police have resorted to aggressive methods to quell such disturbances.

The latest wave of protests occurred in February and March, prompted by a government announcement that 40,000 downtown residents would be evicted to make way for a “green zone” on a 50-hectare parcel in the Sovietskaya neighborhood. The project is being undertaken in conjunction with Baku hosting the first-ever European Olympic Games next summer. Pushback by protesters forced officials to revisit plans for relocations and compensation. Negotiations are continuing.

While the displaced certainly have reason to grumble, many Baku residents approve of the changing cityscape. Sona Gasimly, 31, likes the fact that the city now seems “clean and shining.”

“I always loved my city but now Baku is becoming more and more beautiful day by day,” she said.

Some, however, believe the government should be paying more attention to people, than places. Agakerim Mammadli, a 68-year-old pensioner, is among those who feel neglected. “They [the government] spent millions … on these projects, but the amount of state pensions in the country isn’t enough [for retirees] to enjoy a normal life,” Mammadli said.

Local experts, such as Baku-based architect Novruz Eldarly, applaud many of Baku’s architectural additions, but would like to see officials take a more systemic approach.
“Baku has serious problems with urban planning,” said Eldarly, who is the director of the ENEL architectural firm. “After the collapse of Soviet Union, the system of urban management has changed and authorities so far do not have a clear urban planning policy for Baku. Development is mostly happening spontaneously.”

While foreign architectural firms have been enlisted for high-profile projects, local architects have also been busy in recent years. For example, architect Elchin Aliyev [no relationship to the president] designed a Roman Catholic Church in Baku that has turned into a popular tourist attraction.

Eldarly suggested that local architects need more time to develop their skills before they are ready to handle mega-projects. “Not only in Azerbaijan but in the whole former Soviet Union architects and technologies are lagging behind Western specialists,” he said. “I think we do not have many architects able to design and implement bold modern projects.”

Elchin Aliyev, the vice president of the Architects Union of Azerbaijan, lamented that the desire for new buildings led to the loss of some older architectural treasures. Azerbaijan’s oil boom during the first decades of the 20th century helped turn the city into a center of constructivist architecture, a modernist style that experienced its heyday during the early Soviet era. Under the current wave of change, many constructivist structures have either been altered substantially, or bulldozed altogether, Aliyev noted.