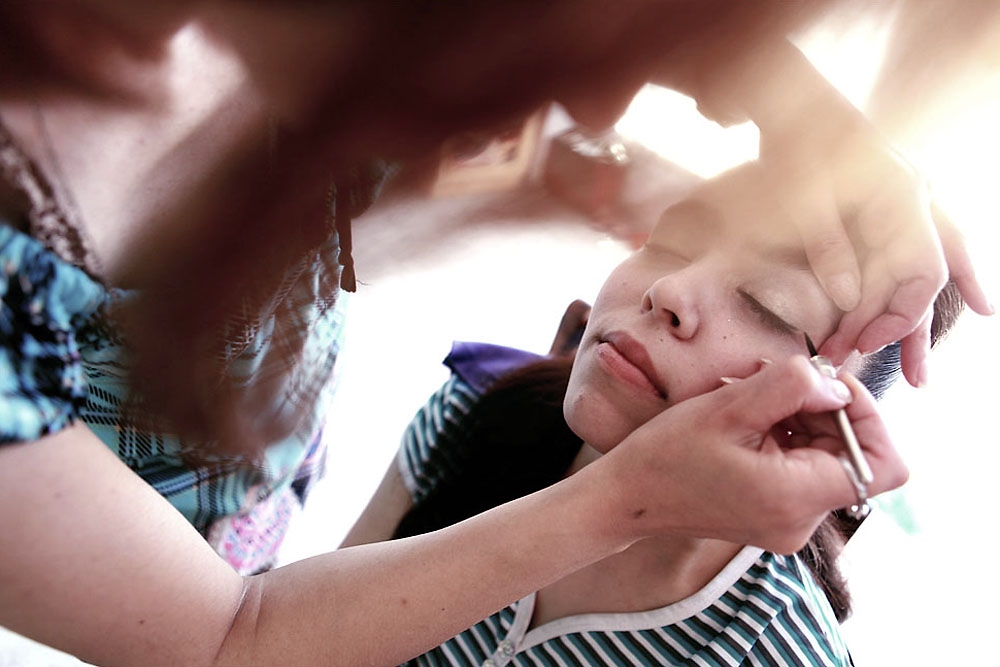 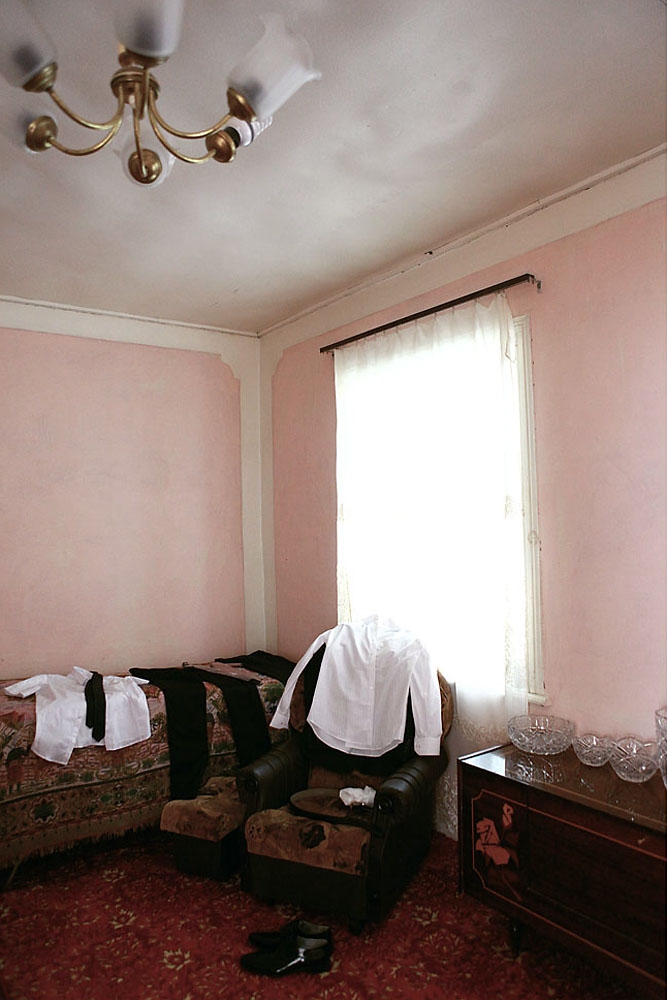 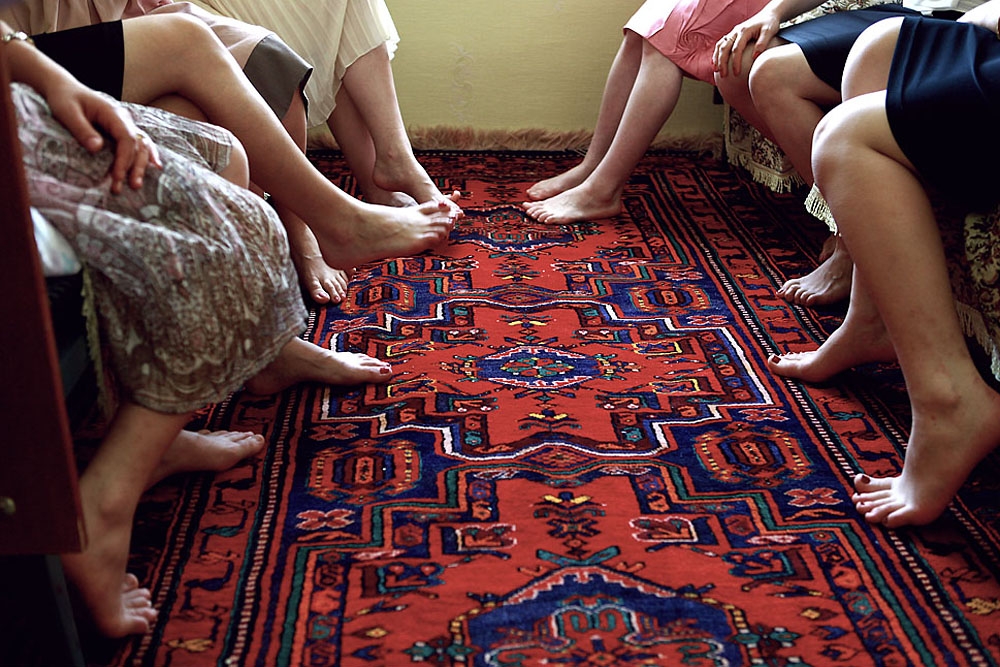 The bridesmaids chat as the wedding day begins. 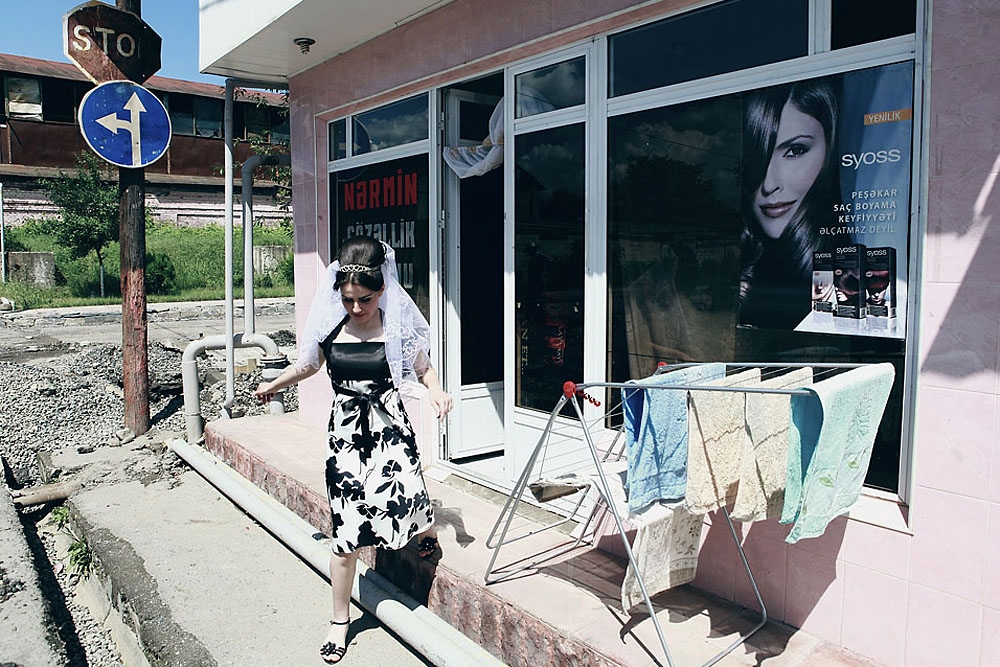 Hasra departs the hair salon on her way back to her home to dress. 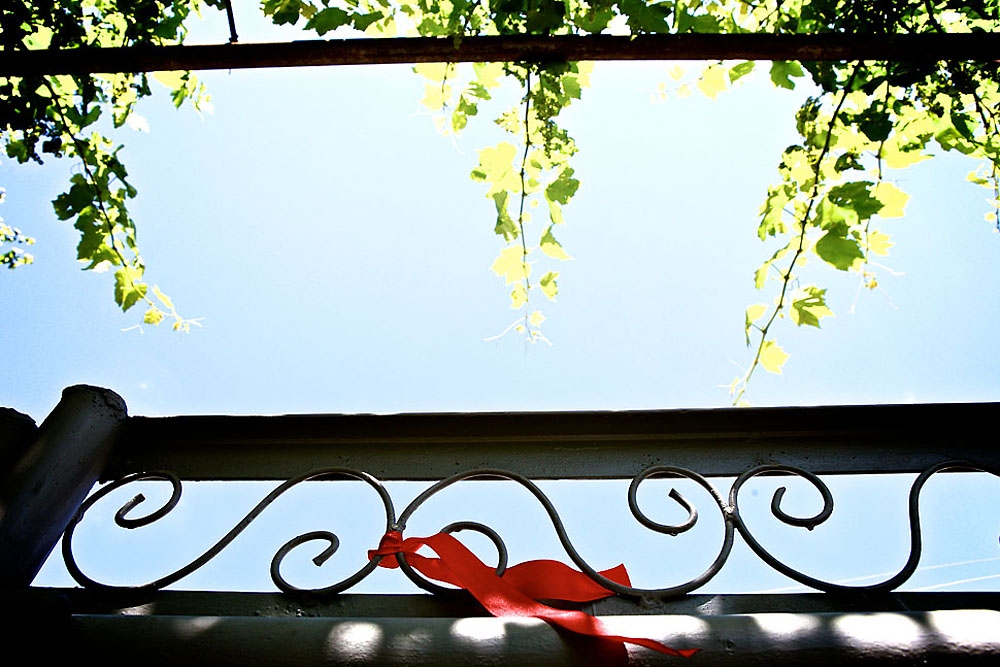 Red ribbons on cars and homes signify a wedding is taking place. 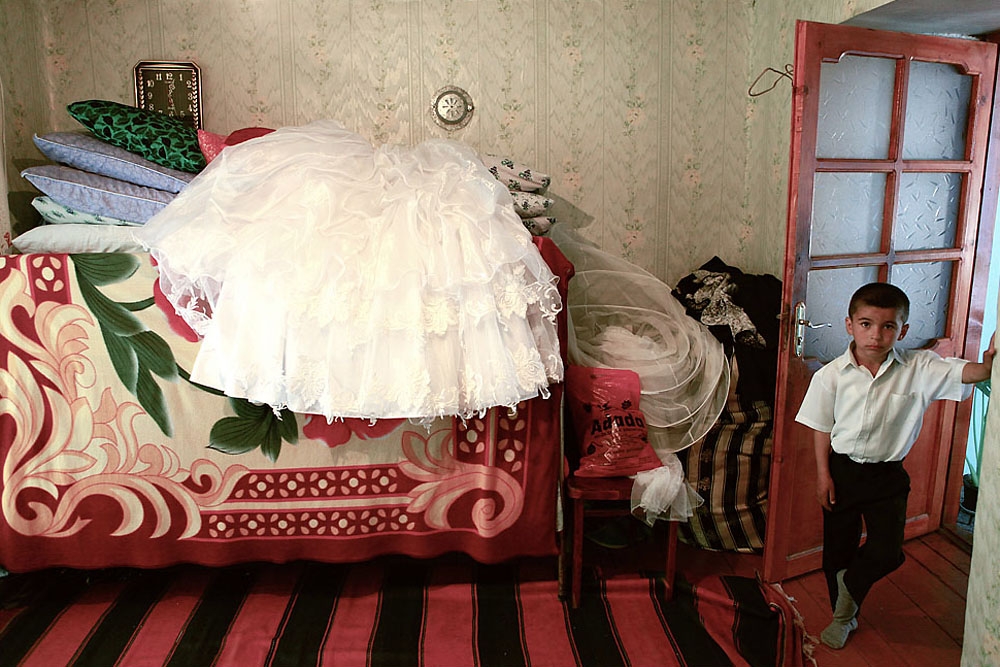 The wedding dress is laid out in the bride's home in the town of Guba. 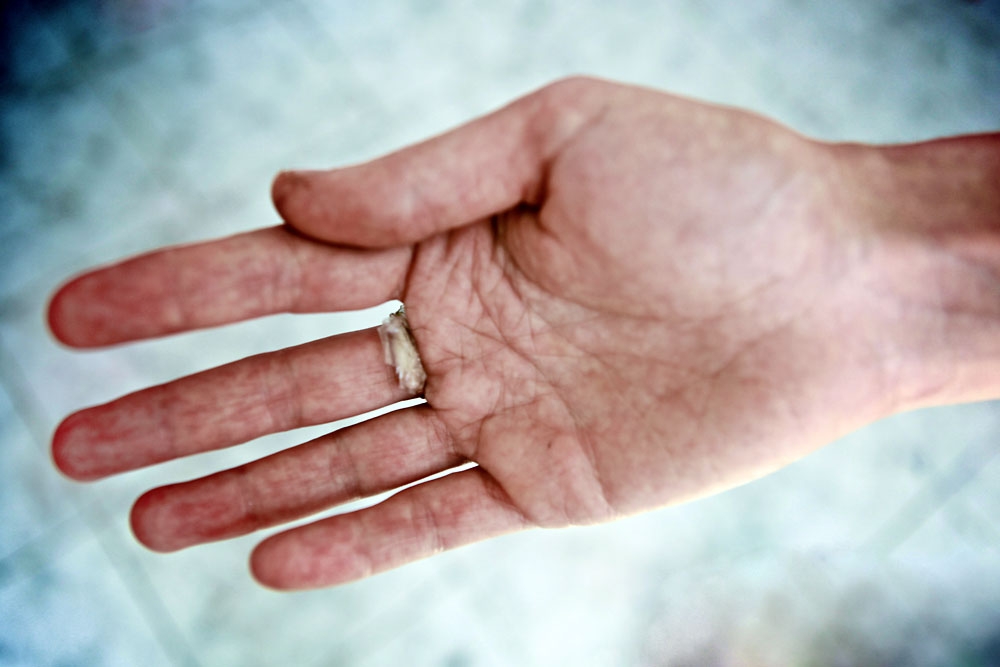 Tape is wrapped around the wedding ring, which is too large for Hasra's finger. 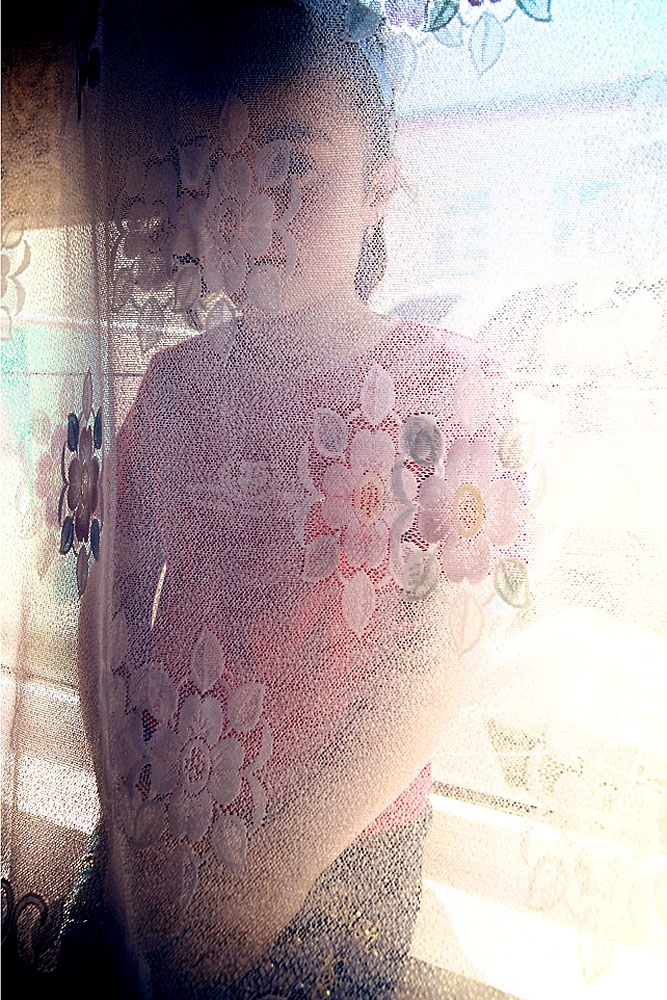 The wedding is celebrated in two parts - one for the men and one for the women, where the bride's younger sister will attend. 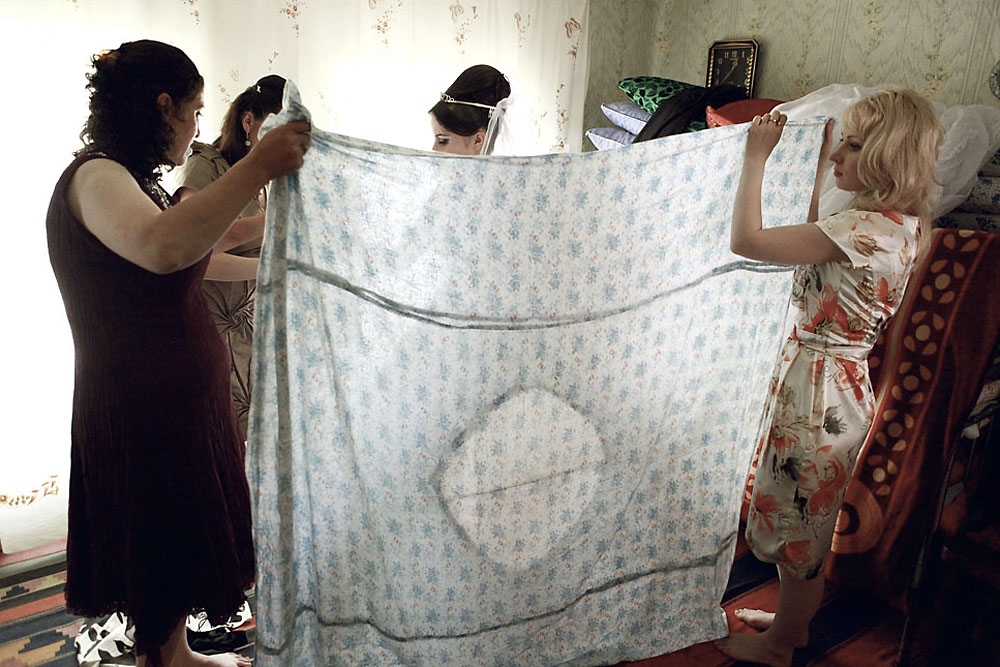 Hasra's relatives help her put on her wedding dress. 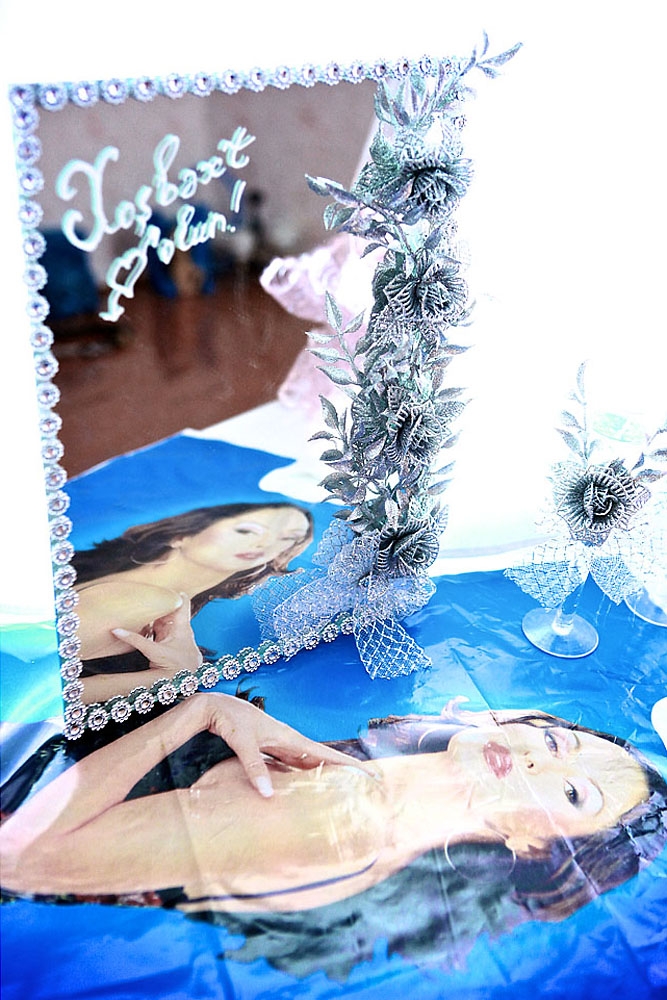 In villages mirrors are common wedding gifts, with this one marked "Be Happy." 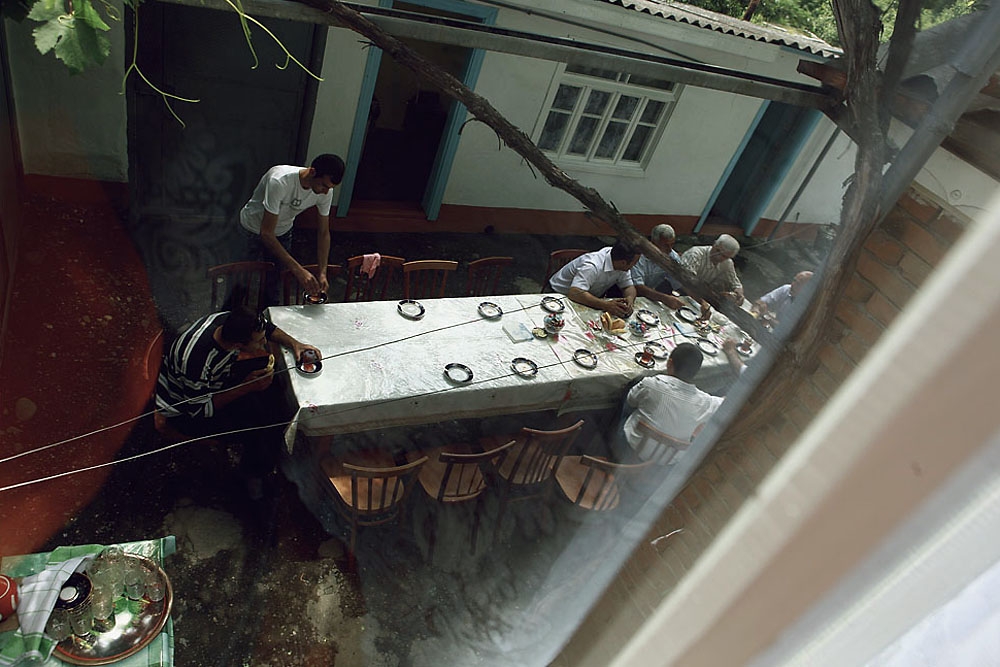 Men gather at the groom's house for his party. 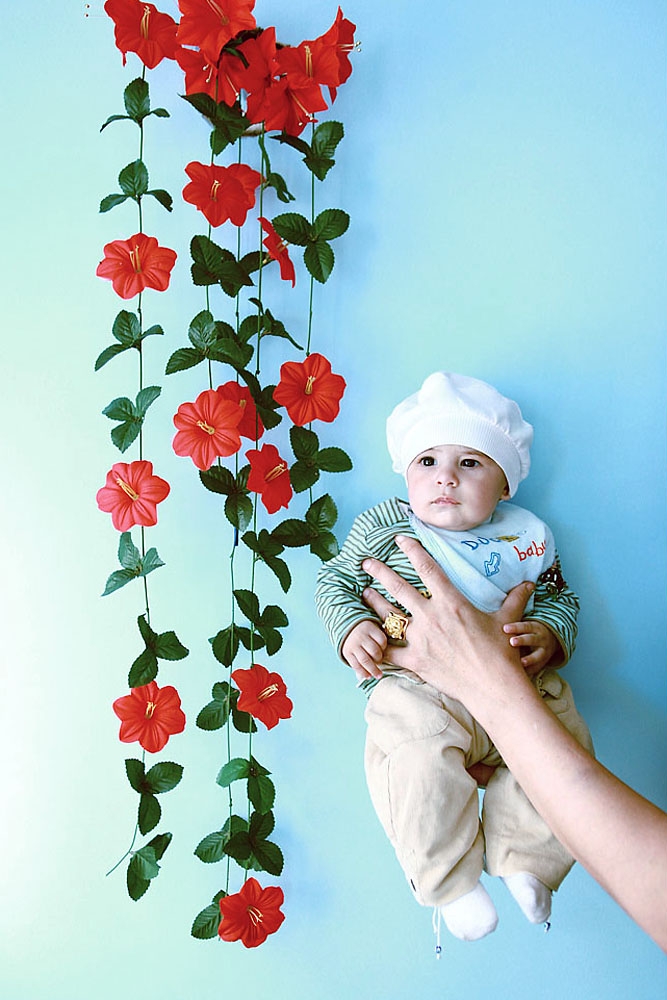 Holding a child - in this case a boy - for good luck with the first pregnancy is tradition. 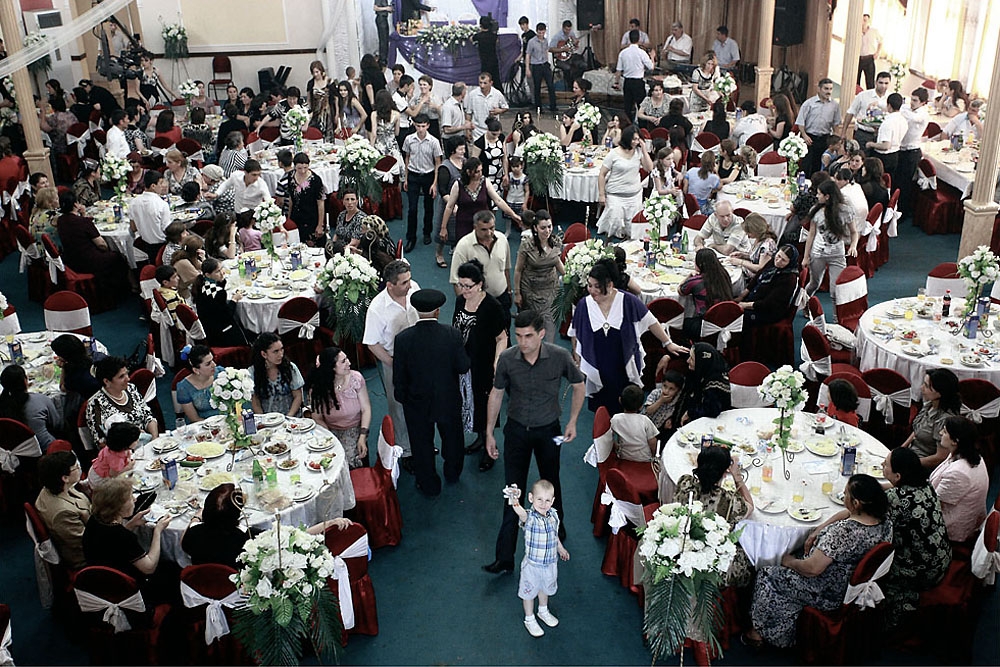 More than 200 guests attended the party, where traditional food of plov, kebabs and salads were served. 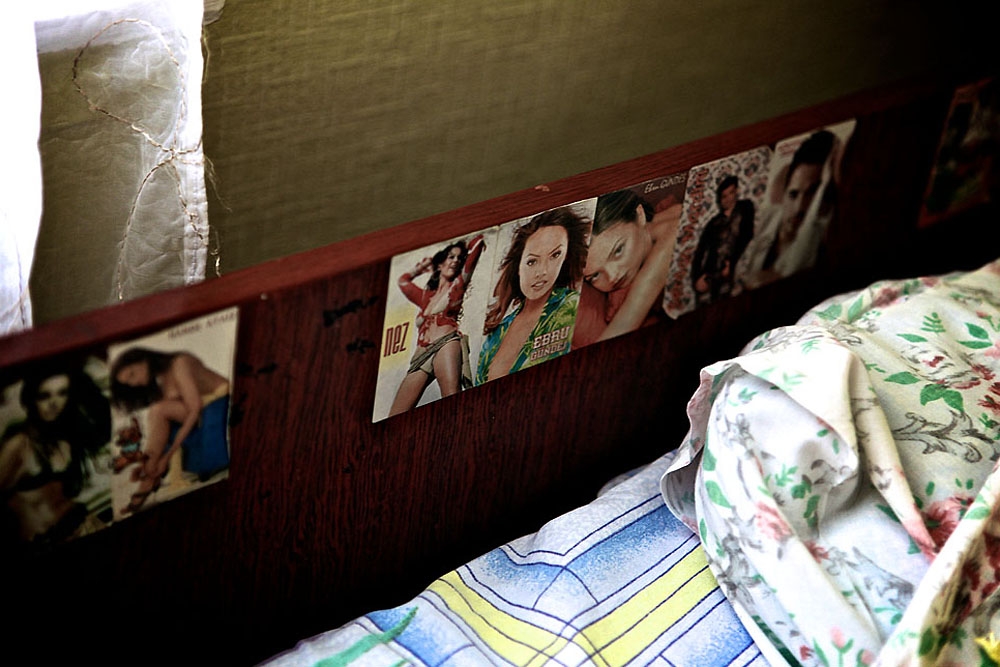 The groom's bachelor bed at his parents' house, where he and his new wife will live to start. 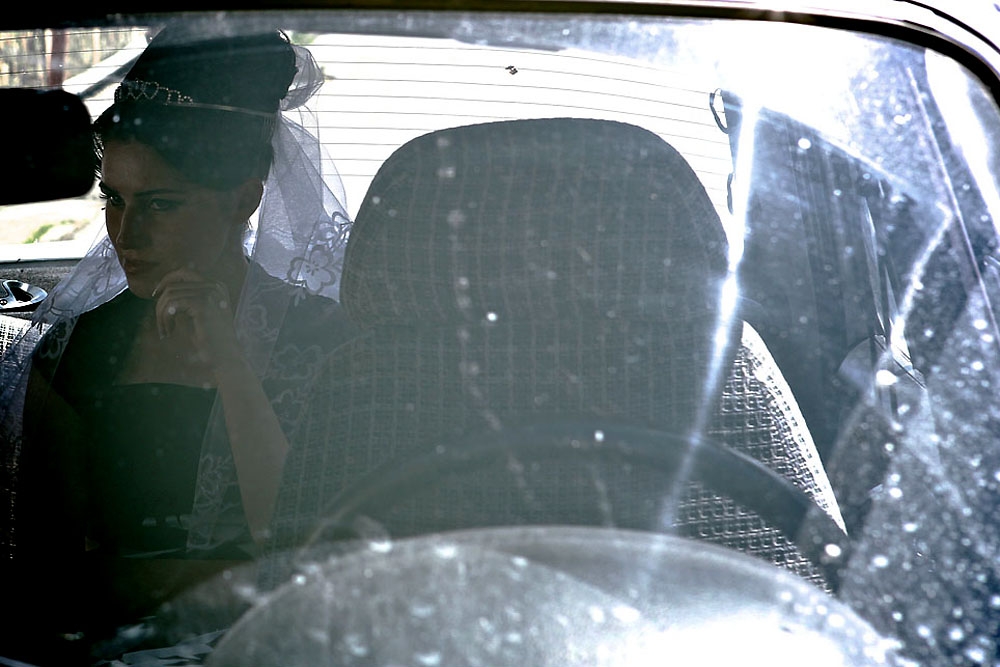 Hasra's sister presented her a gift of golden earrings and a necklace. 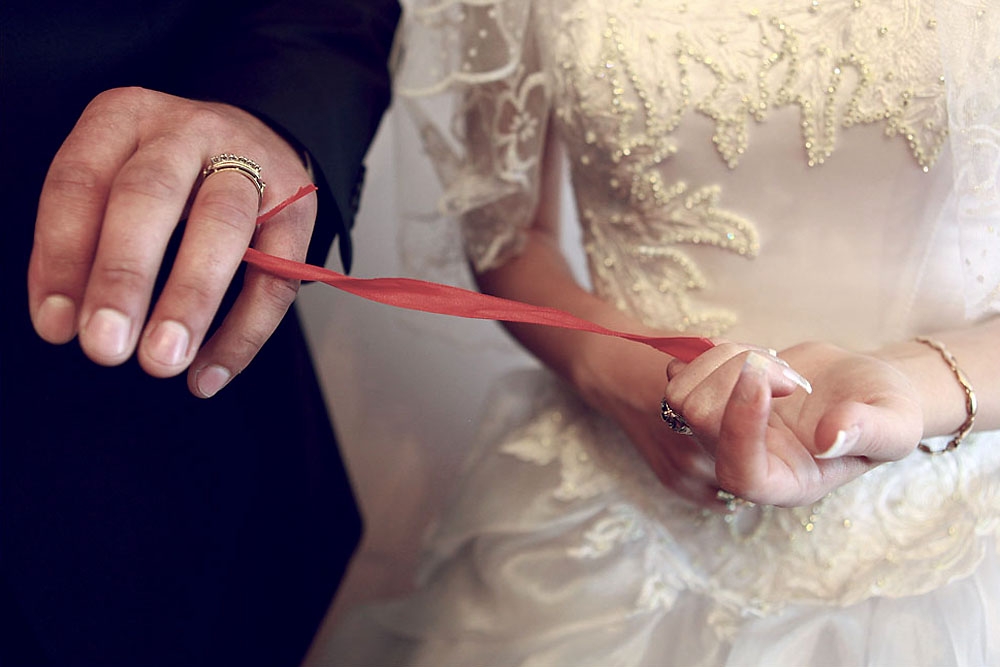 The couple display their rings. 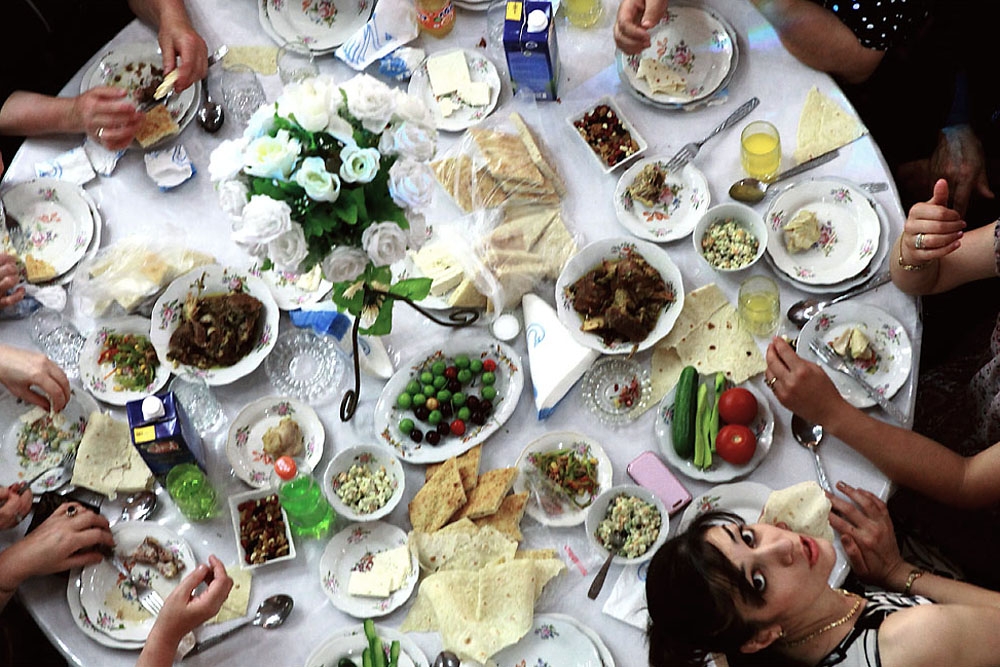 More than 90 percent of the guests were related to the bride. 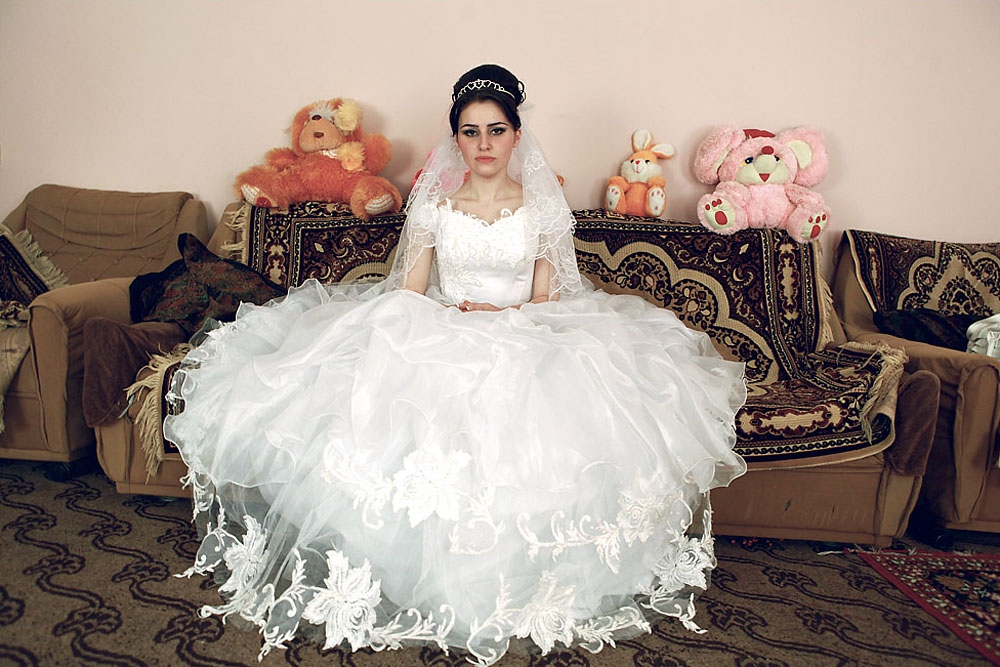 Hasra, who recently finished high school, would like to attend university.
prev
next

At the age of 14, Kifayat Mammadova was married and already an expectant mother. A year and a half later, her marriage had failed, her child had died, and she was on the road to Baku from her village in the mountains of southern Azerbaijan in search of a new life.

Barely literate, 18-year-old Mammadova now works as a waitress at a Baku café. Her husband, six years her senior, left for Russia for work soon after the death of their child and did not return. “It was not possible to live with his parents, but my father did not allow me to return to our home,” she related. “I had to escape to Baku.”

Mammadova’s parents had forced her to get married at a local mosque, thus leaving her legally vulnerable. Her story is far from unique in Azerbaijan, and it’s part of a pattern that Azerbaijani authorities want to end by holding parents and mullahs criminally responsible for underage marriages.

State Committee on Family, Women and Children Chairwoman Hidjran Huseynova claims that an incorrect understanding of the teachings of Islam is the main cause of weddings before the legal age of marriage (after 17 years old). “Parents believe that Islam encourages early marriage and often force their daughters [to marry]. But a kid who is 15 to 17 years old is not ready to create a family, neither psychologically nor physiologically,” Huseynova said.

No punishment currently exists under Azerbaijani law for such marriages, which occur most frequently in the villages of southern Azerbaijan, where local Islamic traditions run strong, Huseynova said. Parents eager to marry off their underage daughters simply head to a local mosque, she continued. Mullahs who perform marriage ceremonies (known as “kyabin”) for such girls often do not know whether or not they have consented to the match since all that is required for the ceremony is the bride’s birth certificate.

Huseynova blames early marriages not only for a higher number of divorces, but also for an increase in Azerbaijan’s rate of infant mortality and in the number of mothers who die during or after childbirth. (Relevant statistics were not immediately available.) Girls’ ability to continue their education is also affected, she added.

To reverse that trend, the State Committee on Family, Women and Children has developed legislation that would increase the legal age for marriage to 18 years, require engaged couples to present a written agreement to their marriage, and establish criminal penalties for those who marry younger. Registered marriages would also require a medical certificate about the health of both the groom and bride. “The latter is necessary to prevent some genetic, chronic diseases and will help the delivery of healthy children,” Huseynova said.

Parliament is expected to vote on the measures this autumn. In comments to the APA news agency this March, Social Welfare Issues Committee Chairperson Khadi Rajably expressed support for the initiative. “The problem should be solved,” Rajably said.

Matanat Azizova, director of the Baku Women’s Crisis Center, a non-governmental organization, cautioned that the issue of early marriages can’t be thoroughly addressed “without radical measures.”

A research study released in April by the State Statistics Committee illustrates the scope of the problem. In the Committee’s survey of 19,711 women from 20 regions, 37 percent acknowledged that they had married before the age of 18; 29 percent when they were between the ages of 18 and 19. Only 9 percent of the women surveyed got married at or after the age of 25.

The number of such marriages is believed to be on the decline, but State Committee on Family, Women and Children Chairwoman Huseynova underlined that “exact statistics are not available because usually families conceal early marriages.”

A startling 63 percent of those women who married under the age of 18, most of whom (61 percent) were villagers, said that they did so involuntarily; either because of their parents’ pressure (26 percent), financial need (11 percent), kidnapping by the groom (6 percent), pregnancy (2 percent) or “other reasons” (18 percent). A vast majority – 90 percent -- of these early marriages resulted in children.

While most of the respondents (68 percent) believed that early marriages pose a risk to women’s health, 30 percent held that the couple’s parents are best placed to decide whether or not such a marriage should occur; 6 percent believed that women should marry before the age of 18, whether for religious, childbearing or other reasons.

The Baku Women’s Crisis Center’s Azizova notes that Azerbaijani parents often cite Islam to justify an early marriage. “But they forget that Islam considers marriage without a woman’s consent to be a serious sin,” she said.

Shahin Hasanly, the ahund, or chief religious scholar, of Baku’s Meshadi Dadash mosque agrees, citing a fatwah (religious ruling) that women should not marry before the age of 17 years old and should have reached a childbearing age. “We are also against early marriages,” Hasanly said, in reference to Azerbaijan’s Muslim clerics.

Activists like Azizova and parliamentarians who back the amendments proposed by the State Committee on Family, Women and Children can only welcome such assertions from prominent religious figures. The further spread of early marriages in Azerbaijan, said Azizova, is simply “inadmissible.”

Shahin Abbasov is a freelance journalist in Baku and a board member of the Open Society Institute Assistance Foundation – Azerbaijan. Sitara Ibrahimova is a freelance photojournalist based in Baku.