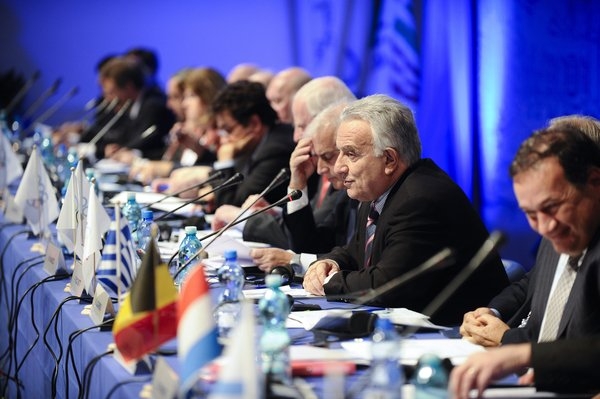 As if there aren’t enough major international athletic competitions already on the calendar, the inaugural European Olympic Games are set to take place in 2015, with Azerbaijan’s capital Baku playing the host.

For President Ilham Aliyev’s administration, the games present another great PR opportunity, enabling authorities to showcase Azerbaijan much in the same way that they did during last year’s Eurovision song contest. But officials aren’t the only ones anticipating the event. Local rights activists, their PR skills honed by last May’s Eurovision extravaganza, see the games as a fresh chance to shine light on the darker side of Azerbaijan’s political system.

Rasul Jafarov -- head of the Baku-based Human Rights Club, a driving force behind last year’s Sing for Democracy campaign, the initiative that drew European attention during Eurovision to alleged Azerbaijani civil-rights abuses -- told EurasiaNet.org that activists “will definitely organize a similar campaign during the European Olympics.”

The European Games, scheduled to take place in June 2015, are expected to draw roughly 15,000 athletes from 49 member states. The games will emulate other regional quadrennial competitions, such as the Pan-American Games, featuring track & field and other events ranging from kayaking to taekwondo. The event’s schedule has not yet been finalized.

Rights activists say it’s never too early to get started on an awareness campaign. One idea, still under discussion, Jafarov said, is to kick-off the initiative a year and a half early with a “Five Hundred Days for Democracy” program that targets visiting athletes and guests with information about the country’s various rights problems.

As was the case for the Eurovision contest, local civil society and human rights groups have no intention of calling for a boycott of the European Olympics.

“Eurovision showed that, even despite huge international attention and criticism, Baku did not soften its authoritarian rule,” Shahinoglu said.

During the Eurovision run-up, the government rejected activists’ criticism as off-target and disparaging, and called for a campaign of “public hatred” against them.

As was the case for Eurovision, members of the European Olympic Committee have not publicly responded to activists’ plans for protest. Rather, they’re focusing on making history.

In reality, the EOC had no other option: Azerbaijan was the only bidder. Reasons for the absence of other candidates, apart from the ongoing financial crisis still wracking the European Union, are not clear. Sports news editor Elmir Aliyev suggested that few European countries wanted to take the commercial risk of hosting a first-time international sports event that could, conceivably, also prove a one-time event.

But for Baku, which made unsuccessful bids for the 2016 and 2020 Summer Olympics, the risk is worth taking, said Aliyev, who works for 1news.az. If Baku is ever going to host a summer Olympic Games in the future, it needs to show that the city can handle hosting major international sporting events. The Euro Olympics -- along two other competitions that Baku will host, the 2016 Chess Olympics, and the 2017 Islamiada, a sports competition for Muslim countries – should give Azerbaijan much needed experience, Elmir Aliyev added.

Already, work has gotten underway on improvements to Azerbaijan’s sports-facility infrastructure. By 2015, a new Olympic stadium with a 60,000 seating capacity and a new gymnastics center in Baku are expected to be completed. Work on both projects began before the European Olympics bid.

Baku’s Crystal Hall, the venue for the 2012 Eurovision contest, as well as five new or reconstructed stadiums in and around Baku could also serve as venues for the European Olympics, said sports editor Aliyev.

Whether any safeguards are planned to prevent similar alleged conflicts of interest during the European Olympics is not known.

The Games will make use of temporary buildings that can later be “dismantled or transferred to a lease,” Youth and Sports Minister Azad Rahimov said in December, the Trend news agency reported. A complex of multi-story buildings on Baku’s Heydar Aliyev Avenue is likely be used as an Olympic Village, he added.

The government plans to earn upwards of 130 million euros ($172.4 million) from selling broadcasting rights, tickets, sponsorship and advertising slots to the European Olympics, Rahimov said. Whether Azerbaijan can turn a profit on the event will depend on which sports will be included in the final program, and whether or not leading European athletes choose to compete, Elmir Aliyev cautioned.