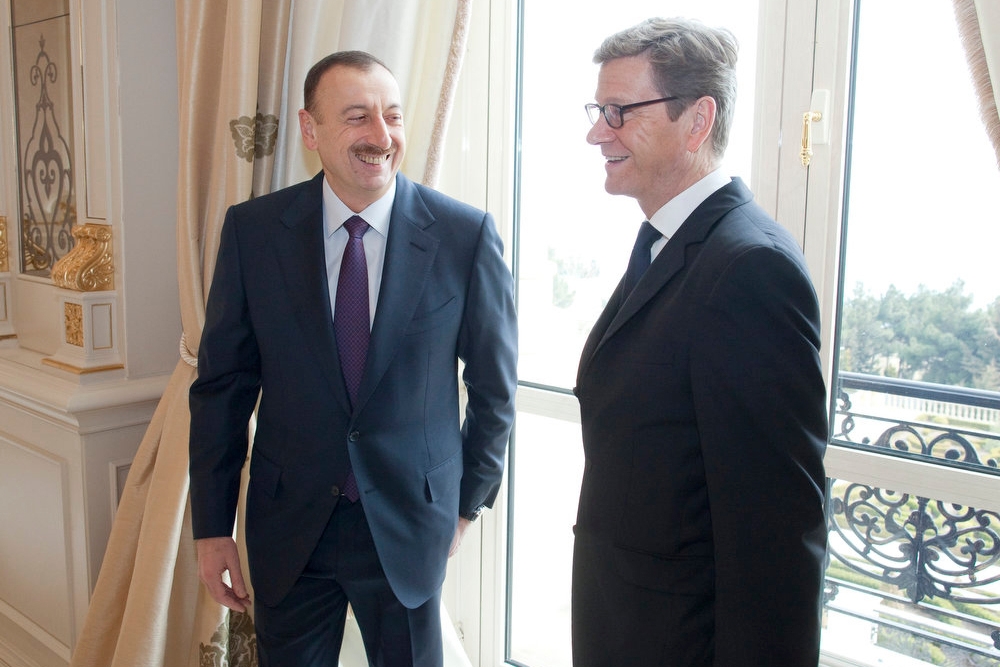 The opening act for this year’s Eurovision song contest is a war of words. State-controlled media outlets in the host country, Azerbaijan, are assailing Germany, complaining that Berlin is behind a “large-scale aggressive campaign” to politicize the Eurovision event and discredit Baku. President Ilham Aliyev’s administration wants to use the Eurovision contest, an event that is expected to attract a global audience of over 100 million, as a public relations springboard to raise Azerbaijan’s international image. Meanwhile, international rights activists, along with local civil society proponents, hope Eurovision can help focus worldwide attention on Azerbaijan’s dismal human rights record. The Eurovision semifinals and finals will be held in Baku in late May. Of late, perhaps the most vocal criticism of Azerbaijan’s democratization record has come from Germany. Major German news entities, including Spiegel Online and Die Zeit, have routinely highlighted the lack of individual liberty and political diversity in Azerbaijan. A few media outlets, along with human rights activists, have tried to drum up support for a Eurovision boycott. “German publications, such as Spiegel, have been most outspoken and open in describing the real situation in Azerbaijan,” Leila Aliyeva, the president of the Center for National and International Studies in Baku, told EurasiaNet.org. German government officials also have offered pointed criticism of the Aliyev administration. In March, Foreign Minister Guido Westerwelle endorsed the idea of using Eurovision to exert pressure on Azerbaijan to democratize. "We should use these events to create a critical public forum in order to … promote our democratic values," the Die Welt newspaper quoted Westerwelle as saying. The German Foreign Minister went on to oppose a boycott, however. Markus Loening, the German government’s human rights representative, has been Baku’s most persistent critic in Berlin. “The Azerbaijani government should respect human rights,” Loening said during a round-table discussion in Baku last August. “The government must understand that the development of free economy is impossible without individual freedom.” Over the past few weeks, Azerbaijan has started firing back at its German critics. State television, for instance, broadcast a report that depicted Frankfurt am Main, Germany’s financial hub, as a den of sleaze and vice. Local newspapers also fanned rumors that Loening engaged in debauched behavior during his August visit to Baku. But those smears pale in comparison to the allegations made in a vitriolic commentary prepared by the Yeni Azerbaijan newspaper, the official organ of the ruling party. The article, posted April 21 on the Today.az website, alleges that German government officials, journalists and non-governmental organization activists have all been engaged in a conspiracy to defame Azerbaijan. “When analyzing the ‘information war’ being carried out against Azerbaijan, one can see that the main actors of the process are certain circles in the West that have political and economic interests in Azerbaijan, Armenia and the Armenian lobby, Islamophobes and radical [political] opposition,” the commentary states. In addition to Loening, the article singles out the Friedrich Naumann Foundation for Freedom and Green Party MP Viola von Cramon for prolonged verbal thrashings. Broadly speaking, the commentary’s main complaint seems to be that visiting German government dignitaries, journalists and NGO activists pay far too much attention to opposition politicians, in particular Ali Kerimli, the leader of the Popular Front Party of Azerbaijan, and Isa Gambar, head of the Musavat Party. The Naumann foundation and other entities with affiliations with German political parties “play an active role in financing the opposition [and] forming a negative opinion about Azerbaijan in the international arena,“ the commentary stated. While some experts in Baku believe it may take a while for Azerbaijani-German bilateral relations to recover, the fallout from the ongoing rhetorical tussle is not expected to hamper Baku’s relationship with the European Union. “Baku is sure that there is no unity ... among the EU states,“ said Aliyeva, the political expert.