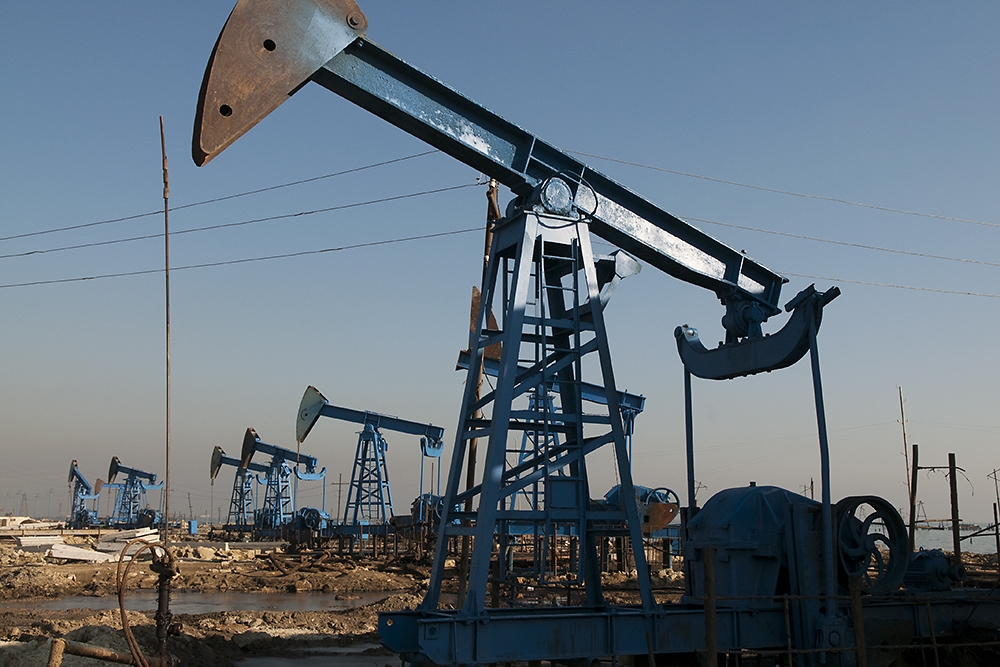 Newly installed nodding donkeys pull up crude oil at an oilfield on the Caspian Sea coast west of the Azerbaijani capital Baku in mid January 2008. The country’s State Oil Fund of Azerbaijan (SOFAZ), which received its first investment in 2001, grew to $37.1 billion by Jan. 1, 2015, but has since lost $3.3 billion in the past 12 months. (Photo: Dean C.K. Cox)

With oil prices now barely above $31 per barrel, Azerbaijan’s energy-export economy is taking on lots of water. And what is worse, Baku’s lifeboat, the State Oil Fund of Azerbaijan, appears to be in danger of foundering.

In the past, the Azerbaijani government had been able to contain discontent by having plenty of cash on hand to funnel into infrastructure initiatives. But now – with oil prices at a near 13-year low, and government reserves quickly dwindling, the state’s ability to use money to paper over problems is increasingly uncertain.

The State Oil Fund of Azerbaijan (SOFAZ), a critical source of funding for Azerbaijan’s state budget, needs help, too, some observers say. The question is what, or who can supply it.

Established in 1999, at the dawn of Azerbaijan’s oil boom, the extra-budgetary fund was designed to safeguard and invest for the public good the windfall profits earned from Azerbaijan’s oil and gas exports.

The fund’s revenues, estimated at $33.6 billion as of last December, have been used to fund infrastructure improvements, including the construction of housing, roads and water systems. It is also been used to finance key economic projects, including pipelines, and create a government-backed study-abroad program.

Recent decisions taken by authorities have compounded the fiscal challenges facing the state. In 2015, as oil prices began plummeting, officials used the Fund to bolster the Central Bank’s declining foreign reserves, and shore up Azerbaijan’s embattled currency, the manat, against the US dollar. On December 21, however, the Central Bank gave up the fight and unpegged the manat from the dollar, slicing off 33.2-percent of the manat’s value. (The exchange rate currently stands at 1.57 manats to the dollar).

The Bank’s manat campaign ate up more than half of its hard-currency reserves, and took a high toll on SOFAZ, too. Based on official data, the Fund saw its reserves dip by over 9.4 percent since the start of 2015 — from $37.1 billion to $33.6 billion as of December 1.

That has consequences for this year’s 14.6-billion-manat ($9.3 billion) state budget, already down by a quarter compared with 2015. The Fund’s transfers to the budget in 2016 will decrease to 10.6 billion manats (over $6.76 billion) — a decline of over 43 percent, according to an RFE/RL report in December.

The government has announced a three-year austerity program, with President Ilham Aliyev calling for citizens to “work more efficiently” to “cover all expenses.” At the same time, the president sent a mixed signal by calling for a 30 percent increase in pensions and state-funded salaries. Those commitments, if implemented, would potentially increase the financial pressure on SOFAZ.

SOFAZ representatives did not respond to questions submitted by EurasiaNet.org in time for publication.

Vahid Ahmedov, a non-party member of parliament’s Economics Committee, downplayed concerns about the Oil Fund’s reduced revenues, describing the agency’s fiscal condition as normal, given current trends in the energy sector. He indicated that managers had means at their disposal to hedge against low oil prices to ensure the Fund remains buoyant.

“The Oil Fund can place its money in certain banks or can purchase a property and use its rental fee [for income] and so on. There are such kinds of ways [to increase revenues],” Ahmedov said. “The Oil Fund is investigating these methods.”

Already, the Fund is reportedly diversifying its portfolio. Together with state-run investment bodies in Abu Dhabi and Qatar, SOFAZ has agreed to invest a combined 350 million euros ($379.8 million) in the purchase and maintenance of three properties in the Italian fashion hub of Milan. SOFAZ itself plunked down 97 million euros ($105.26 million) for the Palazzo Turati, an office facility. How much it expects to receive in any rent is not known.

So long as oil prices do not hit $20, predicted Samir Aliyev, the editor-in-chief of the Economic Forum Magazine, an analytical monthly, “there won’t be a problem in the implementation of the Oil Fund’s 2016 budget.” The manat’s devaluation helps “the Oil Fund to feel comfortable,” he added.

There seems to be little margin for error. Business revenues are declining, as consumers purchase less, and debt for small and medium businesses is rising, noted Mahammad Talibli, director of the Institute of Economic Analysis, a Baku-based think-tank.

“We can’t see the same market dynamism which appeared before, thanks to the oil money,” Talibli commented.

Although the Fund is designed partly to serve as a rainy-day fund for the Azerbaijani public, now that the country finds itself caught in an economic deluge, it seems that ordinary citizens are left without much protection from the elements.

Many ordinary Azerbaijanis are already struggling to make ends meet, and it seems likely that conditions keep declining over at least the near-term, Samir Aliyev suggested. “We can say that the people will pay for the Fund’s loss” of revenue as the economy slows, he said.

In the southern region of Neftchala, one maintenance worker, allegedly unable to meet his loan payments, set himself on fire on January 7, RFE/RL reported.

In downtown Baku, Habil Huseynov, a cab driver with rising diesel costs and fewer riders, is skeptical that the Oil Fund can serve as a lifeline.

“I don’t know actually how the Oil Fund operates and where its benefits go, but I’ve never felt its effect in our lives,” Huseynov said. “[W]e can see the role of oil in the infrastructure of the city, but not in social welfare.”

Durna Safarova is a freelance reporter who covers Azerbaijan.