Baku has said it intends to restore the church to its “original” form. They haven’t said what that is, though, and Armenians haven’t been consulted. Our weekly Post-War Report. 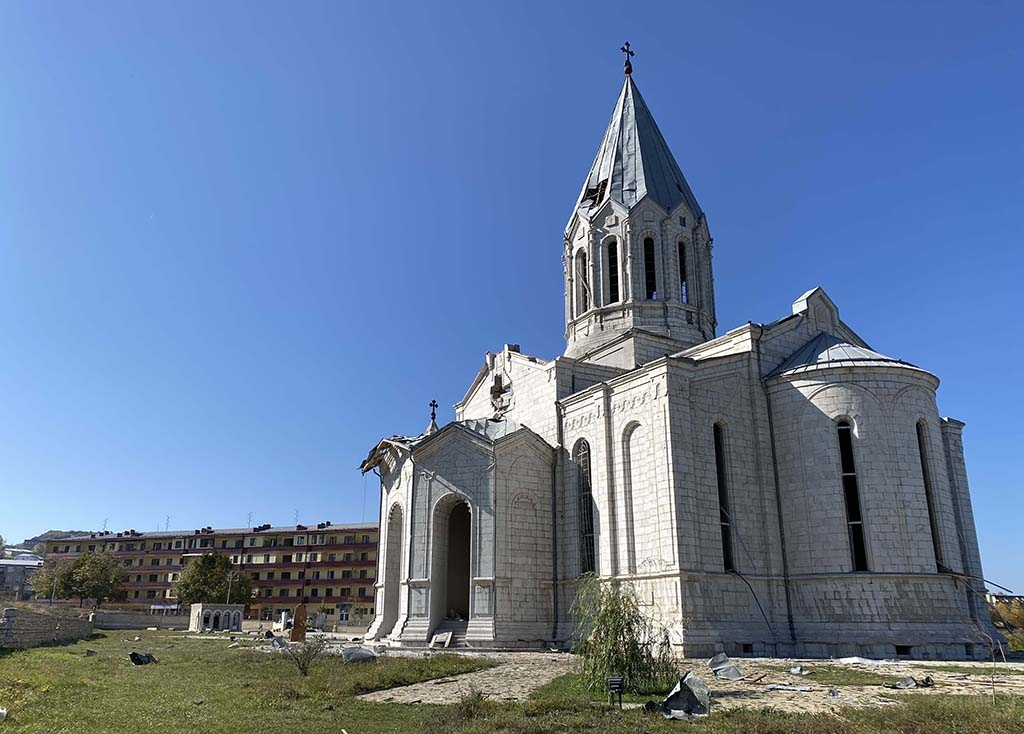 Azerbaijan has begun reconstructing a cathedral in Shusha to what they say is its “original” form, claiming that it had been inauthentically altered by Armenians in the 1990s. It is the most overt case thus far of Baku’s intent to manipulate the heritage of the territory they now control again after winning the war with Armenia last year.

For some weeks the Ghazanchetsots Cathedral, the largest church in Shusha, has been covered in scaffolding and on May 3, Armenian sources began reporting that the dome of the church appeared to have been removed. After an outcry from Armenians, including a statement from Armenia’s Ministry of Foreign Affairs calling it “vandalism,” Azerbaijan acknowledged that it was planning to alter the form of the church.

“Mosques, historical monuments, mausoleums, house-museums, as well as the Gazanchi Church [the Azerbaijani name for Ghazanchetsots] are being restored in the frame of large-scale reconstruction work in Shusha,” the MFA said in a statement. “We would like to note that this reconstruction is carried out in accordance with the original architectural style in order to restore the historical image of Shusha.”

What the “original” style is supposed to be, Baku has not specified.

The church was built in the 19th century; it had an inscription above the southern entrance saying that construction began in 1868 “under the rule of Emperor of All Russia Alexander II and Patriarch Gevorg IV” and was completed in 1887. (At the time of the completion, Russian census figures showed that the 57 percent of Shusha’s population was Armenian and 43 percent, “Tatar,” as Azerbaijanis were then known.)

Azerbaijani sources have been circulating images of the church during the Soviet period and comparing them to its appearance after the 1990s, following Armenia’s victory over Azerbaijan in the first war, when Armenians won sole control of Shusha. They have noted that in the post-Soviet photos, the church acquired a distinctive pointed dome that it didn’t have in the earlier photos.

Even earlier images, though, in the pre-Soviet period, show it with a similar-looking pointed dome.

In 1920, Shusha’s Armenians suffered pogroms at the hands of Azerbaijanis and the city’s entire Armenian population was killed or expelled. The church was damaged at this time and it lost its dome, remaining in that damaged, neglected state throughout the Soviet period. When Armenians won the war in the 1990s and reversed the ethnic cleansing of 1920, one of the first buildings they restored was the cathedral. And they did it with the pointed dome.

Azerbaijani officials have nevertheless been arguing that the pointed dome was an artificial addition added for the first time in the 1990s.

“Everything in Shusha is being restored in the appearance in which it was constructed historically,” member of parliament Togrul Juvarli said, the news website Caucasian Knot reported. “Most likely the church also will be restored to its original appearance, as it was before, without the pointed dome.”

The church was struck twice during last year’s war, and its dome was damaged. Human Rights Watch concluded that Azerbaijan likely “deliberately targeted” the church “in violation of the laws of war.”

“An artillery shell damaged the dome, and in any case it needed to be dismantled,” an unnamed Azerbaijani government source told Caucasian Knot. The source also argued that the form of the church was changed in the 1990s. “This is proved by photo and video evidence … they altered the appearance of the church, rebuilt it and put in the pointed dome which it didn’t have before. Now the work is going on to eliminate the damage from the shelling of the church and to return it to its original appearance.”

What precisely the church was supposed to have been before it was altered is not clear.

Caucasian Knot’s unnamed source implied that the church may have been Albanian, referring to an Azerbaijani state-sponsored pseudoscientific theory ascribing many Armenian churches in the region to another medieval people, the Caucasian Albanians. “Azerbaijani restorers have experience restoring churches. In the last two decades several Albanian churches have been restored, as well as the Armenian church in the center of Baku,” the source said.

But those claims about Albanian origins are not usually applied to 19th century or later churches. Other Azerbaijani sources suggest, without much evidence, that it was originally Russian Orthodox.

The muddled narrative from Baku about what the true origin of the church is supposed to be makes it also unclear what it will ultimately look like once it’s restored. A commentary about the church on the website haqqin.az suggested that “whether it will become Orthodox or Grigoryan [that is, Armenian Apostolic], is for the descendants of the ancient Albanians – the Orthodox Udis – to decide.” (The Udis are a small minority in Azerbaijan that are the closest descendants of the Caucasian Albanians and who have been lately enlisted by Baku to help implement its Albanian theory.)

A spokesperson for Azerbaijan’s Ministry of Culture did not respond to messages from Eurasianet seeking more information.

In any case, it’s clear that Baku is not seeking input from Armenians, nor from international experts. A long-discussed UNESCO mission to the region has yet to take place, though a UNESCO spokesperson confirmed to Eurasianet that “negotiations are ongoing for a mission,” without providing more details.

The church renovation thus parallels in some ways Armenians’ custody of the Islamic and Azerbaijani cultural sites on the same territory during the time that they controlled it, from the 1990s until last year. Armenians, with some fanfare, restored a mosque in Shusha in 2019, but they labeled it “Persian” over the objections of Azerbaijanis. In many more cases, though, Armenians simply neglected non-Armenian historic sites, wrote them out of the region’s history, and let them fall into ruin or allowed them to be plundered, a process that Azerbaijanis are now trying to reverse.

Azerbaijan already is known to have destroyed one Armenian church, although that was a three-year-old structure on a military base. Also this week, a group of U.S.-based scholars documenting the fate of Armenian sites in the region published satellite photography showing the destruction of an Armenian cemetery. Azerbaijani officials have not commented.

The brazenness of this church renovation, though, and the Azerbaijani authorities’ explicitly stated intent to alter its appearance to fit their historical narrative, is yet a further step. It suggests a growing confidence that they can remake their newly retaken territories in whatever image they want. “It’s clear that their goal is to erase everything Armenian from Shushi,” an Armenian former resident of the town, Artyom Pogosyan, told Caucasian Knot. “And it’s very sad that neither the Armenians, nor the international community, nor the Russian peacekeepers can influence the actions of the Azerbaijanis.”

Soon after the war ended in November, Azerbaijan President Ilham Aliyev promised to his Russian counterpart Vladimir Putin – one of the co-signers of the ceasefire statement – that Baku would protect Christian sites now under its control. Russian Foreign Minister Sergey Lavrov visited Yerevan this week, but made only an oblique mention of the church issue. “We are not reducing our efforts aimed at returning home all the detainees, demining, protecting cultural and religious heritage, allowing the work in Karabakh of high-profile international organizations,” he said. Lavrov is slated to visit Baku next week.

While Azerbaijan originally paid some lip service to the notion that Karabakh’s ethnic Armenians would be welcomed as citizens of Azerbaijan, the church renovation suggests that Baku isn’t even pretending to take its ostensible citizens’ views into consideration.

That point was driven further home by Azerbaijan’s dissolution on April 30 of the official organization representing Azerbaijanis who had been displaced from the region in the first conflict, the "Azerbaijani Community of Nagorno-Karabakh Region of the Republic of Azerbaijan.” That group had been framed as a counter-organization to the self-proclaimed Nagorno-Karabakh Republic that Armenians formed as a de facto government in the territory.

The dissolution of the community “sends a message to the world,” MP Zahid Oruj said on May 4: “there will be no status, that is, the concept of ‘Armenian community’ will not be accepted, they should not expect special rights and privileges, they can live in accordance with the Constitution of Azerbaijan like other ethnic groups.”