Azerbaijan boosts carpet making, but at what cost? 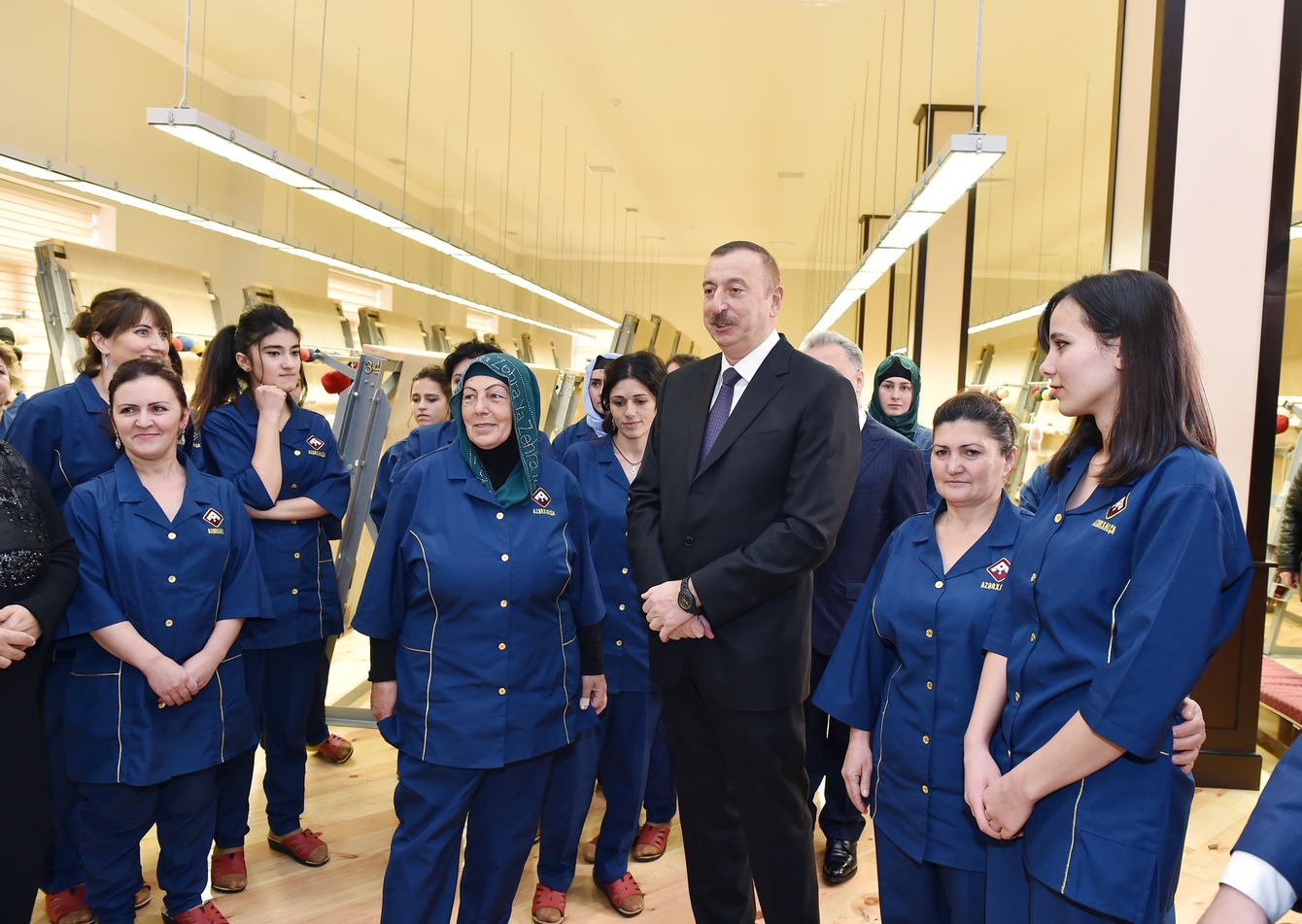 Ilham Aliyev opening a carpet factory in the northern city of Guba in December. (Photo: president.az)

Azerbaijan has a long history of carpet making, with generations of artisans – mostly women – passing on their skills one to another.

But the tradition is on the decline today.

“Machines distort the designs, regional traditions are getting lost, they have started using chemicals and synthetic materials,” said Fatima Aghamirzayeva, a carpet maker and scholar of Azerbaijani weaving. “Because of all this, Azerbaijani carpets have lost their reputation.”

That is in spite of substantial government intervention to boost the industry. Baku lobbied successfully for UNESCO to name the Azerbaijani carpet to its “Representative List of the Intangible Cultural Heritage of Humanity” in 2010, and built a flashy new museum devoted to carpets on Baku's waterfront.

The government also has tried to encourage carpet making as part of its broader strategy of diversifying the economy away from reliance on oil and gas.

In 2016, Baku launched a state-owned enterprise, Azərxalça, which manages all aspects of the carpet industry including production, exports, and research and development into new weaving technology.

By the end of 2019, the company expects to launch 30 carpet factories around the country; in the first quarter of 2018 alone the state allocated 14 million manats (about $8.3 million) to construct seven facilities.

“Carpet making, as an export product, will strengthen our country's economy,” Aliyev said during the opening ceremony of an Azərxalça factory in the northern city of Guba in December. “We should try and we are trying to increase non-oil exports. That means in particular the development of industry, agriculture, and carpet making as well.”

Some, however, have questioned the economic logic of the state support. Azərxalça appears to be operating in the red, according to the company's financial reports. In 2017, it lost 566,253 manats, five times more than a year before.

“This is the result when the state intervenes in the economy,” said Nazim Mammadov, an economist and former MP from the ruling New Azerbaijan Party. “It's good to adopt a program on carpet making. But in order to stimulate the sector it would be better to create conditions for businesspeople and provide targeted loans.”

There are also concerns about the damage done to Azerbaijan's carpet reputation.

Aliyev connected Azərxalça's work to Azerbaijan's heritage. “Carpet weaving is our national treasure. You are preserving this wealth, you're developing the art,” he told the gathered factory workers, most of them women. “We also are helping to keep this art eternal and for it to be passed on from generation to generation.”

But others argue the state-run industrialization of carpet making is in fact damaging the ancient art.

“Industrial carpets use fake knots, they are flimsy,” Aghamirzayeva said. “Working with machines is much faster – a robot weaves a carpet in a month, and a person does it in six months. The yarn we use on one carpet can make three industrial carpets,” she said. “And later, when the machine-made carpets are presented as hand-made in the market, sellers of real handmade carpets are hurt.”

Aghamirzayeva added that working conditions in a factory are inherently less healthy than the traditional way of making carpets at home. “An artist should stop when she wants to; walk, sit down, and take a break when she does not want to sew,” she said. “Otherwise, after three or four carpets people will get sick. The artist must be healthy – this is how masterpieces are created.”

Aghamirzayeva, 63, was born and still lives in Guba, one of Azerbaijan's carpet centers. She founded the Aygun Carpet Factory in 1989, and calls herself the first female entrepreneur in Azerbaijan. Her artisans choose their own schedules and use only natural dyes made on-site. She also follows old rules of what kind of wool to use – like only using wool from live sheep, and not using the outer layers of wool that have been exposed to the sun.

Her parents were both carpet weavers and she estimates that she has taught 5,000 women over her career.

In 2017, Aghamirzayeva spearheaded the establishment of a new, local government-run carpet-making facility in the village of Alpan, in the Guba region, with aid from the United States Agency for International Development. She said she expects to employ about 60 women once the small factory is at full capacity.

“Why doesn't the government build small workshops in villages, so people don't have to leave and go to cities?” she asked. “Why were all the [Azərxalça factories] built in the center or on highways? They did not build it for carpets – carpets don't need big buildings, they just need a nice warm attitude.