The surprise move set off speculation involving the economy, Russia, Armenia, and Europe. 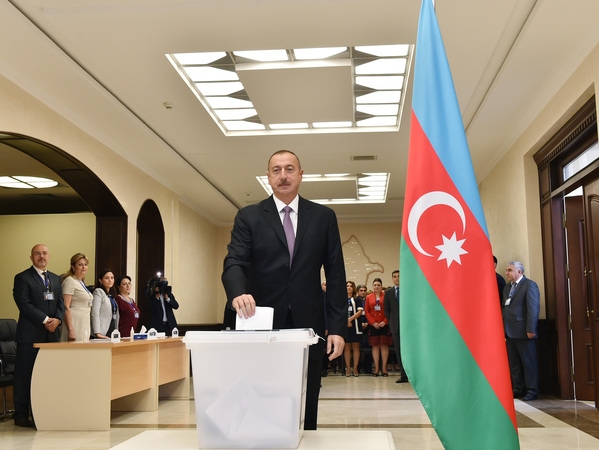 President Ilham Aliyev votes in the 2013 presidential elections. He made a surprise announcement on February 5 that the next presidential vote will be April 11. (photo: president.az)

Azerbaijan has unexpectedly announced that it is moving up presidential elections, previously scheduled for October, to April.

The outcome of the election is not in doubt: Ilham Aliyev will win a fourth term. But the rush to hold the vote suggests Baku remains nervous about its ability to control the entire process.

On February 5, Aliyev signed a decree asking the Central Election Commission (CEC) to hold the election on April 11, local media reported. Previously the government had announced the election for October 17. The CEC announced that it would announce its decision within a week.

There was no rationale given for the move. “This is a matter arising from the Constitution and it belongs to the competence of the head of state,” one ruling party MP, Aydin Mirzazadeh, told the Turan news agency.

In the absence of better explanations, the announcement set off a rash of speculation in Azerbaijan and among Caucasus-watchers.

One theory was that Azerbaijan's sputtering economy has worried Aliyev that something unpredictable could happen by October. “For the first time in the entire period of Ilham Aliyev's rule (since 2003), elections are held in an economic and, indeed, systemic crisis in general, which creates certain risks for the government that seeks to hold elections without special excesses and generation of additional problems,” the news agency Turan wrote in a snap analysis.

The early election date could also be related to Ilgar Mammadov, perhaps Baku's highest-profile political prisoner. Mammadov was arrested in 2013 on spurious charges that appeared to be aimed at keeping him out of the presidential elections that year.

“The problem Mammadov poses for President Aliev is analogous to the one that Alexei Navalny (a different sort of personality but of similar standing) poses for Vladimir Putin: he represents a credible alternative to the status quo,” veteran Caucasus analyst Thomas de Waal wrote in a recent analysis for Carnegie Europe.

Mammadov is the head of the Republican Alternative Movement (REAL), the most credible opposition group remaining in Azerbaijan after more than two decades of authoritarian consolidation begun by Aliyev's father and predecessor, Heydar Aliyev, and accelerated by the younger Aliyev.

“It [REAL] is staffed by lawyers, like Mammadov, and economists with ideas about how to modernize the economy and democratize the country,” de Waal wrote. “It therefore also has a natural appeal for some in the Azerbaijani elite who want to see Western-leaning policies but who are sickened by the colossal corruption in the country.”

Baku is facing possible sanctions from the Council of Europe stemming from Mammadov's imprisonment, which the European Court of Human Rights has ruled unjust.

In a tweet, de Waal suggested the sped-up election could be a way out of those sanctions: “release Ilgar Mammadov after the deadline to register as a candidate, escape punishment from Council of Europe.”

Another source of speculation was that the move could head off any attempt by Russia to insert itself into the process. This theory is based on the experience of 2013, when in the months ahead of Azerbaijani presidential elections a group of ethnic Azeri diaspora members in Russia formed a new lobbying group. Baku perceived the move as being aimed at somehow undermining Aliyev's power. If that was in fact the aim, it failed, and Aliyev won with a comfortable 85 percent of the vote.

According to this theory, Russia is having its own elections on March 18 and will be too busy with that to meddle in an Azerbaijani election less than a month later.

Another area for speculation is that Azerbaijan's neighbor and foe, Armenia, is transitioning to a parliamentary system. That also will happen in April, and while the implications of that are still unclear – President Serzh Sargsyan could maintain his power by being named prime minister – it could in any case open Armenia's system up a bit and provide an unattractive comparison to Azerbaijan.

“I think it causes a kind of psychological discomfort for Aliyev, and he wants to avoid that issue being widely discussed within Azerbaijani public before the elections,” said Altay Goyushov, an Azerbaijani historian and analyst, in an email interview with Eurasianet.org.

Goyushov, however, cautioned that that was “speculation,” and noted that the moved-up vote could also be tied to Mammadov. He also said Aliyev appears to be laying the groundwork for a further crackdown on domestic opposition, which he would like to do soon, but after the election.

Azerbaijan adopted a new constitution in 2016, and one provision is the ability to call extraordinary presidential elections. In its review of the constitution, the Council of Europe's Venice Commission strongly criticized that authority: “The idea of an 'extraordinary', i.e. anticipated, election of the President of the Republic is unacceptable.”

The commissioners argued that such authority gives excessive power to the president “by enabling him/her to choose the most beneficial moment for the next elections and thus to promote a successor or to renew his/her own term, and this in a country where an incumbent President has never lost an election.”

In December, legislators further changed the election law to allow the president to call special elections 60 days ahead of time, shortening that term from 90 days.