Azerbaijan: Can a Water Reservoir Help Resolve the Karabakh Conflict? 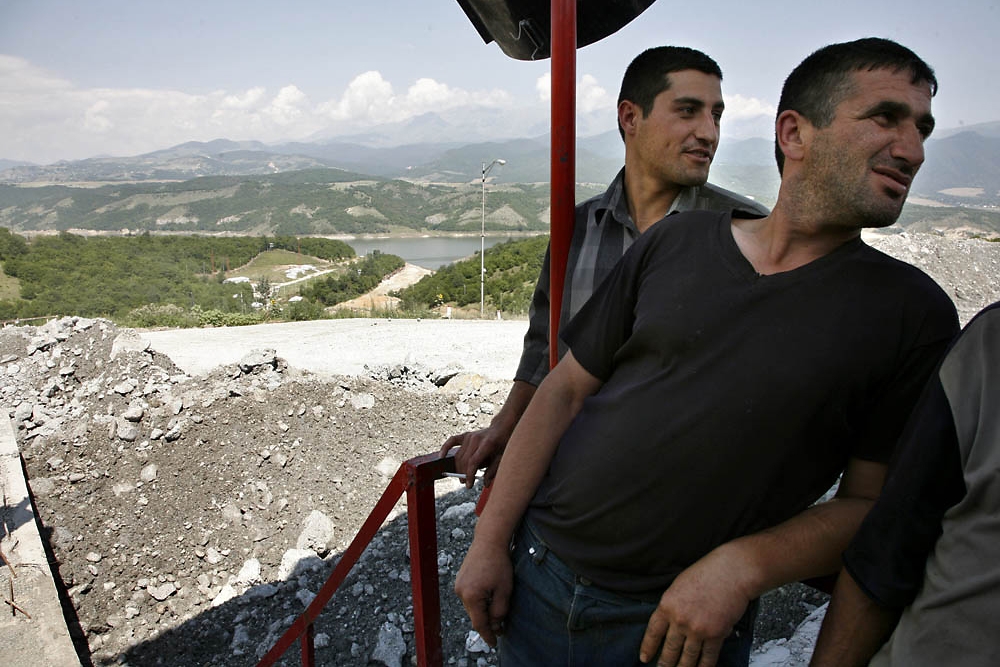 Workers from Armenia arrive for their shift at a mine run by Base Metals near the Sarsang water reservoir in Nagorno Karabakh in July 2007. Built in 1976 on the Tartar River, the reservoir, situated within Karabakh, holds 560 million cubic meters of water. (Photo: Justyna Mielnikiewicz)

Water, or more accurately access to water, is just another weapon in the nearly 30-year conflict between Armenia and Azerbaijan over the Nagorno Karabakh territory.

When a 1994 ceasefire brought an end to active fighting between Azerbaijan, Armenia and ethnic Armenian separatists over Karabakh, Azerbaijan lost not only territory, but also access to the 560-million-cubic-meter Sarsang Reservoir.

Built in 1976 on the Tartar River, the reservoir, situated within Karabakh, used to provide drinking and irrigation water not only to the remote mountainous region itself, but also to six surrounding regions now occupied by Armenian and separatist forces. Among them is the mostly Azerbaijani-controlled region of Tartar, a land of rolling hills situated on the line of contact between Azerbaijani and Armenian forces.

Tartar’s population of roughly 102,000 people, mostly Internally Displaced Persons (IDPs) from Karabakh and the occupied regions, have no other high-volume source of water. They lose access to Sarsang’s water during the region’s hot and dry summer, and regain it in the fall and winter, when de-facto Karabakhi officials open the floodgates without notice.

Last December, Parliamentary Assembly of the Council of Europe (PACE) rapporteur Milica Marković of Bosnia-Herzegovina asserted that those responsible for the reservoir were “deliberately depriving” adjoining Azerbaijani-controlled regions of water. She warned that a lack of regular technical maintenance for the Sarsang dam means that the reservoir endangers the entire area.

At the same time, the lack of water in the summer means that biodiversity has declined and desertification has begun, Marković, who did not visit Sarsang, stated in a 2014 report.

“We’re in a desperate situation,” agreed 29-year-old IDP Bakhtiyar Mammadov. “Our agricultural products are being destroyed in front of our eyes.”

Mammadov, who earns just 200-250 manats ($124-$155) per month as a high-school literature teacher, uses a third of his house’s quarter-of-an-acre (0.10 hectare) plot of land to grow fruit and vegetables for daily consumption. “But irrigation totally depends on the Sarsang Water Reservoir, and we can’t use our gardens in summertime,” he said.

No easy solution is in sight. Without access to a steady flow of irrigation water, the regional Tartarchay Waterworks Operating Department takes water from the Tartar River through ditches, said Mehman Karimov, the Department’s chief engineer. But the water can only partially meet the needs of the 477,800 people living in Tartar and the three nearby Azerbaijani-controlled regions of Barda, Yevlakh and Goranboy, he said.

“People are leaving their homeland,” said Huseyn Huseynov, a 54-year-old Tartar resident cycling across a bridge over the Tartar River with 80 kilos of non-ferrous scrap metal he was seeking to sell. Farming, he claimed, is no longer possible. “Without water there is no life. This hardship is Armenia’s responsibility.”

A January 26 resolution issued by PACE called on the Armenian government to stop using water resources “as a political tool.”

It called for an immediate withdrawal of Armenian armed forces from the surrounding area to allow engineers and hydrologists access to the reservoir to examine its condition.

Both Armenia and the de-facto Karabakh government which it protects have denounced the resolution as a propaganda ploy and insist that the reservoir meets international standards.

The Azerbaijani Foreign Ministry described Armenia’s stance to EurasiaNet.org as “nonsense” and “disrespectful” to international law. Ministry spokesperson Hikmat Hajiyev stated that Baku is “continuing our activity to inform the international community about the requirements of the [PACE] resolution.”

Locals living along the Tartar River are looking for an immediate, practical solution to the problem. Over the years, the Tartar regional government has drilled over 400 wells as a subsitute for when reservoir water is not available, but residents claim the well water does not meet their needs, either.

In the settlement of Shikharkh, five kilometers west of the regional seat, Tartar City, only two wells exist to provide water for 710 registered inhabitants, most IDP families. “An artesian well is not enough to raise animals, or to plant a garden,” complained 37-year-old Kamal Mustafayev, who supports his 10-member family with a small flock of sheep that brings in about 300 to 400 manats ($186-$248) per month. “It is for drinking, not for irrigation.”

To compensate, Mustafayev and others like him drive with empty plastic cans to Tartar City “to buy drinkable water.”

Azerbaijan’s Ministry of Ecology and Natural Resources did not respond to a request for information about how it is addressing the situation.

In 2013, Karabakh’s de-facto government proposed working out a way for both sides to use the Sarsang Reservoir, which provides most of Karabakh’s electricity. The schedule for the floodgates depends on Karabakh’s own power needs, Arthur Aghabegian, the territory’s de-facto deputy prime minister, told RFE/RL.

But Baku, which does not negotiate with the separatists, ignored the offer.

Out of the South Caucasus’ three separatist disputes, only Tbilisi and separatist Abkhazia have reached a framework for the shared use of a water resource (the Enguri hydropower station). In breakaway South Ossetia, de-facto officials regularly turn off water heading toward Georgian-controlled territory.

Resolving the Sarsang problem “might play a positive role in resolving the conflict” between Baku and separatist Karabakh, posited Abdullayeva, who serves on the Public Council for the Settlement of the Karabakh Conflict. “It can be a very good basis for negotiations. Because this is a humanitarian issue, so both sides can agree [on a solution].”

Talking water with de-facto Karabakhi ministers, parliamentarians “and so on” does not mean Baku accepts Karabakh’s independence from Azerbaijan, she underlined.

As yet, however, no sign exists that such talks are in the offing. Said discouraged high-school teacher Mammadov: “I hope that we will resolve the conflict peacefully, in order to avoid more death and losses.”

Perspectives | Don’t water it down: The role of water security in the Armenia-Azerbaijan war

One year after arrests for war crimes, Azerbaijan remains silent