Azerbaijan: Can Baku Broker Peace Between Turkey and Russia? 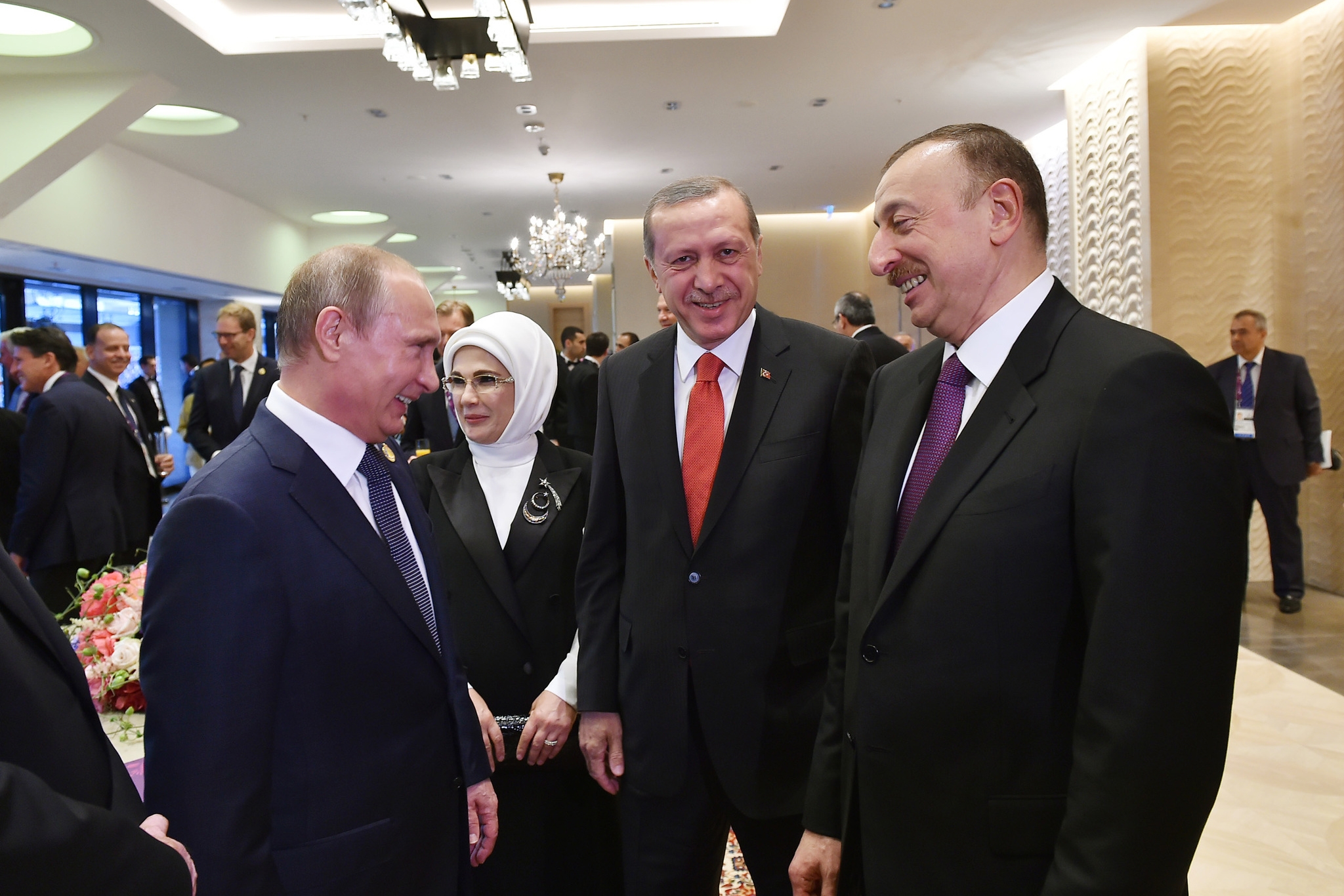 Putin, Erdoğan and Aliyev (left to right) sharing a pleasant moment during happier times at the European Games in Baku in June 2015. Can Azerbaijan help negotiate a return to better days? (Photo: Azerbaijani Presidential Press Service)

Azerbaijan wants to wriggle out of a diplomatic dilemma by trying to reconcile Turkey, its closest strategic ally, and Russia, with whom it shares a Soviet past. But experts believe the risk of Azerbaijan getting dragged into the brewing confrontation may be higher than Baku’s ability to broker a solution.

Since Turkey’s downing of a Russian fighter last November, Russian-Turkish relations have been in a downward spiral. Russia has stepped up efforts to bomb Turkish-backed rebels in Syria, while providing support to Kurdish fighters who Ankara deems to be terrorists. Speculation is now running high that Turkish forces could invade Syria to defend Ankara’s strategic interests. That would be a step with unpredictable consequences, given Russian leader Vladimir Putin’s evident hostility for his Turkish counterpart Recep Tayyip Erdoğan.

Against that backdrop, Azerbaijan, a Turkic-speaking country that borders Russia and has strong economic and cultural connections to Turkey, can only feel nervous.

“The current state of the relationship between Russia and Turkey is in no way desirable for Azerbaijan,” Azerbaijani Foreign Minister Elmar Mammadyarov said in a recent interview with The Business Year, an online publisher and business-research firm. “Needless to say, both Turkey and Russia play an important role in maintaining the security and stability in the South Caucasus region and beyond.”

At a February 3 news conference in Baku, Mammadyarov stated that Azerbaijan is holding talks with officials from both countries about normalizing their bilateral relations. “We’ll do everything in our power to tap [into] a way out of this crisis,” the TASS news agency quoted Mammadyarov as saying.

What Azerbaijani officials are specifically doing to encourage Ankara and Moscow to back away from a confrontation remains unknown. The Azerbaijani Ministry of Foreign Affairs did not respond to questions about the reported meetings in time for publication. No additional information has been disclosed publicly.

Azerbaijan has plenty of economic incentives to promote a Turkish-Russian rapprochement.

Oil and gas pipelines, along with the Baku-Tbilisi-Kars railway, create strong links between the Turkish and Azerbaijani governments. Approximately 3,000 Turkish companies operate in Azerbaijan – five times the number of firms with Russian shareholders, according to the Azerbaijan Export and Investment Promotion Foundation. Turkish companies are also involved in huge Azerbaijani construction projects, such as the Olympic stadium for Baku’s 2015 European Games.

At roughly $1.48 billion in 2015, Turkey ranks as Azerbaijan’s fourth largest trade partner, just after Russia, according to the State Customs Committee. Russia narrowly outranks Turkey by some $379 million.

In the last 10 years, Russia has invested over $1.8 billion in Azerbaijan’s economy, while Azerbaijan has invested over $1 billion in the Russian economy. One of Baku’s strongest links to Moscow, though, is the estimated 2 million-plus ethnic Azeris living in Russia or working there temporarily, according to the State Committee on Work with Diaspora.

Azerbaijani political analyst Mubariz Ahmadoğlu from Baku’s Center for Political Innovations and Technologies believes that such human connections strengthen Azerbaijan’s potential to mediate between Russia and Turkey. Azerbaijani officials and experts already act as consultants for “business relations between Turkey and Russia,” he noted.

“If Putin needs a negotiator, it would definitely be Azerbaijan,” Ahmadoğlu added.

Istanbul-based security-policy analyst Gareth Jenkins, who focuses on Turkey and the Caucasus, questioned whether Baku can influence the situation.

“At the moment, Baku is more likely to come under pressure to choose between one or the other,” he said. “I am sure that Azerbaijan is sincerely committed to trying to broker a rapprochement, but I don’t think that there is anything that Baku, or anyone else for that matter, can do. The situation will probably only change when Erdoğan or Putin leave power.”

Already, some in Russia are wary about where Azerbaijan stands, and hinted that there would consequences if Baku displeased the Kremlin. After Azerbaijani President Ilham Aliyev took part in a London conference on international humanitarian support for Syria in early February, the mainstream Russian news site Gazeta.ru published a story with the headline “Moscow Is Losing Azerbaijan.”

The article’s author, Vladimir Zharikhin, the deputy chair the CIS (Commonwealth of Independent States) Institute, a State Duma-linked think-tank, noted that Russia’s large ethnic Azeri community “is a very serious factor [for Baku to keep in mind] in order to avoid a sudden step.”

Aliyev, as “a far-sighted politician” and “worthy son of his father,” the late President Heydar Aliyev, who ran Azerbaijan’s Communist Party and KGB, “will try to stay away from any coalition,” Zharikhin predicted.

Sensing its isolation on Syria, Moscow is looking for allies among post-Soviet countries, argued Azerbaijani political analyst Arastun Orujlu, director of the Baku-based East-West Research Center. Turkey, meanwhile, is also trying to tug Azerbaijan in its direction. Turkish Prime Minister Ahmet Davutoğlu recently charged that Russia posed a threat to Azerbaijan’s territorial integrity through its alliance with Armenia. Davutoğlu was referring to the long-lasting struggle for control of Nagorno-Karabakh. Russian officials lambasted the Turkish prime minister’s comments as “neo-Ottoman” behavior.

Plays for Azerbaijan’s loyalty greatly complicate Baku’s desire to act as an “honest broker” between Turkey and Russia.

“Azerbaijan will not be able to carry out a peace-building mission,” Orujlu said. “It is not believable.”