Azerbaijan: Can the Opposition Keep it Together? 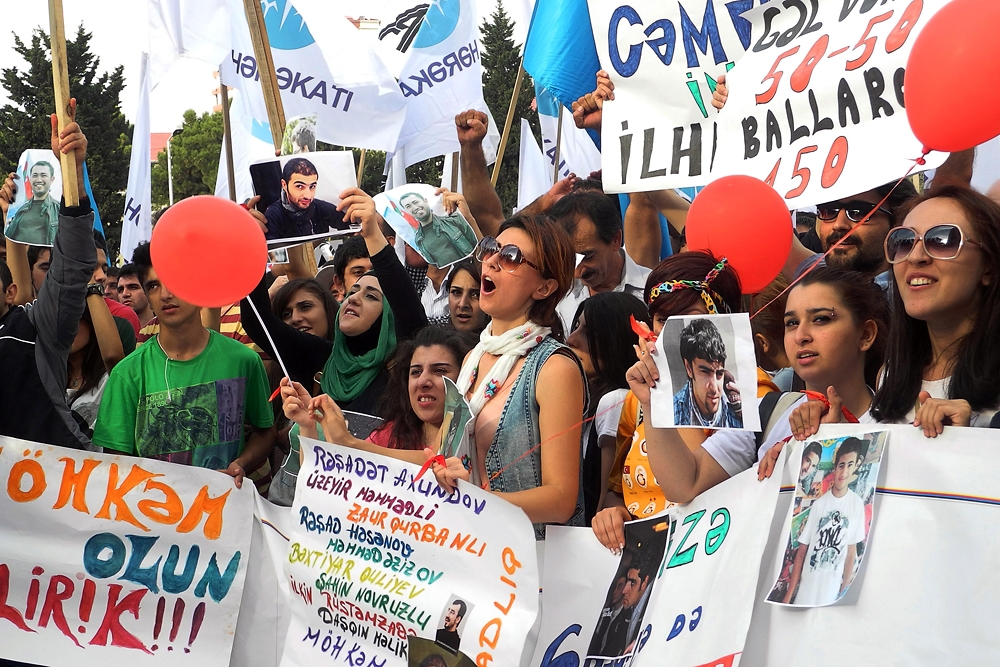 For Azerbaijan’s long-fragmented opposition, the setback in the recent presidential election could mark the start of a return to competitiveness.

The unified candidate for National Council of Democratic Forces (NCDF), 61-year-old historian Jamil Hasanli, never stood a serious chance in the October 9 election against President Ilham Aliyev. The OSCE’s Office for Democratic Institutions and Human Rights (ODIHR) in its initial election findings said that “limitations on the freedoms of expression, assembly and association that did not guarantee a level playing field for candidates.” ODIHR observers also noted “significant problems were observed throughout all stages of election-day processes.” In the official tally, Hasanli received 5.53 percent of the vote. Aliyev cruised to a third term with almost 85 percent.

The NCDF is a broad coalition of opposition elements, ranging from pro-Western parties like Musavat and the Popular Front of Azerbaijan, to Islamists and some pro-Russian groups. On the surface, it would seem that the NCDF would have trouble staying together. But some analysts believe that Hasanli stands a chance of uniting the coalition’s disparate elements. “For the first time since the early 1990s, when Abulfaz Elchibey became leader of the Popular Front movement, we have a figure about whom the opposition have reached consensus,” commented Baku-based political analyst Togrul Juvarly.

The elections brought domestic and foreign prominence to Hasanli, a onetime MP and advisor to the late Elchibey, and formed a voter base around his name; including among outspoken youth activists, agreed Elkhan Shahinoglu, director of the Atlas Research Center, a Baku think-tank.

“He started being characterized as a political figure that unites various opposition parties and groups,” Shahinoglu said. For the first time in decades, an intellectual with “a clean reputation,” rather than an easier-to-smear party leader, or government official has emerged as a political leader, he added.

Timing may play to Hasanli’s advantage, Shahinoglu continued. “People are getting tired of seeing one face [Ilham Aliyev’s] on TV all the time, and with the growing role of social networks, this factor will increase.”

Over the near term, going up against a government apparatus that supports Aliyev and the ruling Yeni Azerbaijan Party could prove challenging. Nonetheless, Hasanli has vowed that the “election is not the end of our fight.” Accordingly, the NCDF appealed unsuccessfully to the Constitutional Court to throw out the election results as fraudulent. One protest rally against the results was held in Baku on October 12; a second was canceled. On October 19, the Court confirmed the results, and Aliyev’s inauguration was held roughly a mere two hours later.

No one expected that the NCDF’s objections would upset Aliyev’s hold on power; now the question is to what extent the coalition can put pressure on the entrenched administration. Without preserving some degree of unity, no serious challenge can be expected during Aliyev’s third, five-year term, noted Shahinoglu. Municipal elections are scheduled for 2014, and a parliamentary poll is due in 2015.

Ali Kerimli and Isa Gambar, leaders of the NCDF’s chief parties, the Popular Front Party of Azerbaijan and Musavat Party, have expressed “full support” for Hasanli. But other NCDF figures – in particular Lala Shovket, the leader of the National Unity Movement and Azerbaijan Liberal Party, and Rasul Guliyev, the US-based leader of the Azerbaijan Democratic Party -- have indicated they are prepared to head in different directions.

At a news conference in Baku, Hasanli stated that the coalition plans to hold a conference on October 24 to discuss its political future. He did not exclude the possibility of the exit of some parties, saying, cryptically, that “those who work for the government should not be in the National Council.”

Turan News Agency Director Mehman Aliyev, who oversaw public relations for the NCDF, predicts that Hasanli will stay in politics, and possibly take the place of Oscar-winning filmmaker Rustam Ibragimbekov as chairperson of the National Council.

Post-election, Hasanli traveled to Brussels, Paris and Strasbourg to discuss the election with French officials and representatives of the European Union and Council of Europe. On November 14, he plans to visit the United States for 10 days in his NCDF capacity.

Information about an agenda for the America visit has not been released. At the October 21 news conference, Hasanli refused to say who had invited him to the United States. At the same time, he said he plans to have “high-ranking meetings” with representatives of the State Department, as well as members of the Senate and House of Representatives.

Those meetings, Shahinoglu believes, are not a matter of happenstance. “It does not mean that the United States or EU question Aliyev’s legitimacy. However, the dialogue with Hasanli is kind of a message to Baku that if the government does not undertake important reforms, support of the Azerbaijani opposition could increase.”

The US Embassy in Baku has not responded to reports about Hasanli’s plans to visit Washington.

Both the embassy and State Department recently have been involved in a public war of words with senior Azerbaijani government officials over whether or not US Ambassador Richard Morningstar advised the government on how much of the vote should go to President Aliyev.

The embassy appears primed to move on. “As with any partner, we have our differences, but we also have many shared critical interests,” Morningstar said in a statement to mark President Aliyev’s inauguration.