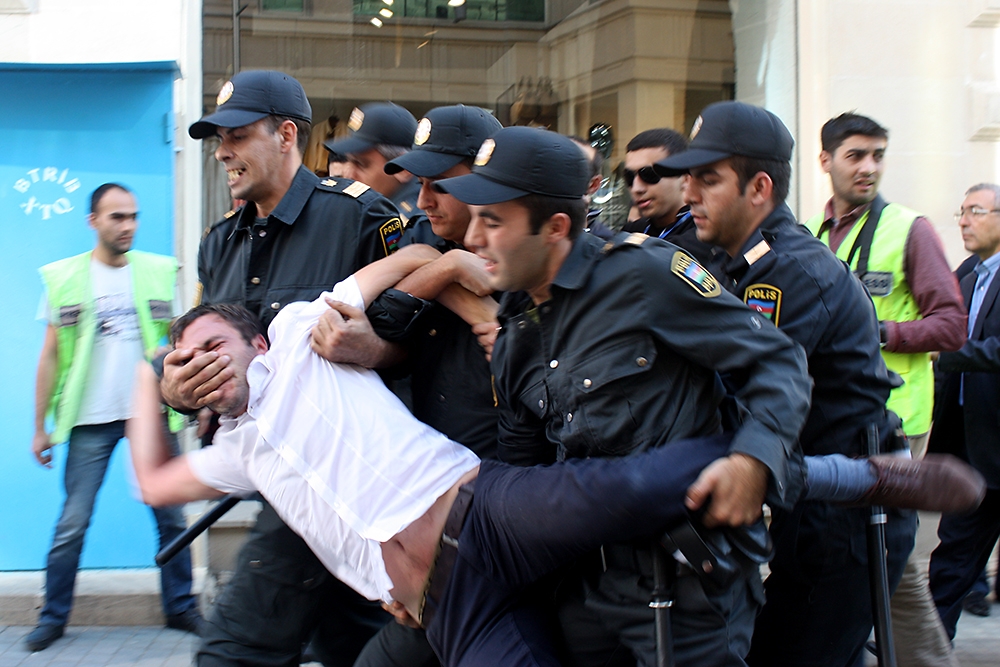 Murad Adilov, a member of the Azerbaijani opposition Popular Front Party who was arrested in August 2014 on charges of narcotic possession, was recently recognized, along with other prisoners, by Amnesty International as a prisoner of conscience. (Photo: Azadliq Radiosu/RFE/RL)

Some Azerbaijani activists claim that international rights watchdogs, such as Amnesty International, have created a two-tier system for political prisoners that effectively hinders less prominent government critics’ chances for release from prison.

“As a result,” he charged, “except for very few cases, the majority of illegal arrests, cases of unfairly punished people are overlooked; especially, opposition parties’ members and religious activists are being forgotten by international organizations.”

Other organizations use the more general designation of “political prisoner.” Their numbers are, by far, higher.

The Norwegian Helsinki Committee names 75 Azerbaijanis as political prisoners (76 percent of them religious figures), while the Washington, DC-based Freedom House, in March, put the tally at over 80.

The assessment considers such factors as the prisoner’s actions prior to arrest; the circumstances of the arrest and charges brought; and observance of due process, proportional sentencing and fair-trial standards, he added.

Details for Amnesty’s own criteria are not published online. That frustrates some prisoners’ family members, who believe inclusion in its list gives their relatives a greater chance for release.

“We don’t blame them for political double standards, but we’d like to ask ... based on which criteria do they not recognize several political prisoners as prisoners of conscience?” asked Natig Adilov, a spokesperson for the opposition Popular Front Party of Azerbaijan (PFPA), in reference to Amnesty International. “Some prisoners get this status immediately …”

Amnesty’s Caucasus campaigner, Levan Asatiani, cautioned, though, that such a designation demands a lengthy and careful analysis and corroboration of the facts of a prisoner’s arrest.

“It is not always possible to do such [an] analysis and corroboration in every single case, largely due to the available resources,” he said.

Baku, which insists that Azerbaijan has no political prisoners, has blocked Amnesty International from entering the country since 2015. The organization says that it has requested, but not received, an explanation.

But one Azerbaijani observer argues that campaigning to have individuals listed as prisoners of conscience is a waste of energy.

That title can help a case only if it goes before the European Court of Human Rights in Strasbourg, France, since it conveys greater public recognition, commented human rights analyst Vugar Gojayev. “For the Azerbaijani government, it does not make any difference if the prisoner is a prisoner of conscience or a political prisoner,” he said.

Rather than trying to get international organizations to bestow the title of “prisoner of conscience,” Azerbaijan’s civil society “should conduct wider advocacy work to halt the politically motivated arrests and systematic prosecution of persons for the legitimate exercise of civil and political rights in Azerbaijan,” he said.

Yet defense attorney Imanov believes that this year’s release of Azerbaijanis deemed prisoners of conscience shows that the title can make a difference.

“[I]n the absence of an effective judicial system in Azerbaijan, the fate of political prisoners more and more depends on the will of the ruling political power … ,” he noted. “Amnesty International is an important organization in the world, so it is a huge blow for the defense of those prisoners who did not get the status as a prisoner of conscience.”

Some former political prisoners, like Rasul Jafarov and investigative journalist Khadija Ismayilova*, have added their voices to the calls for greater international attention for all Azerbaijanis believed to be imprisoned for criticism of the government.

Parliamentarian Aydin Mirzazade, a member of the ruling New Azerbaijan Party and of Azerbaijan’s delegation to the Council of Europe’s Parliamentary Assembly, insists, however, that such attention has no bearing on the decision to release prisoners.

“The attitude towards prisoners is defined via the Constitution and legislation,” he posited. “After some time passes, if a prisoner is not a threat to society; also, if he has finished a certain part of his sentence, or he regrets what he has done, then they will be released either conditionally or via an amnesty order by the president.”

But such releases can be followed by more arrests. As Ismayilova opined in an earlier interview with OCCRP, Azerbaijan’s “political prison” comes with a “revolving door.”

*Khadija Ismayilova has worked as a freelance reporter for EurasiaNet.org.