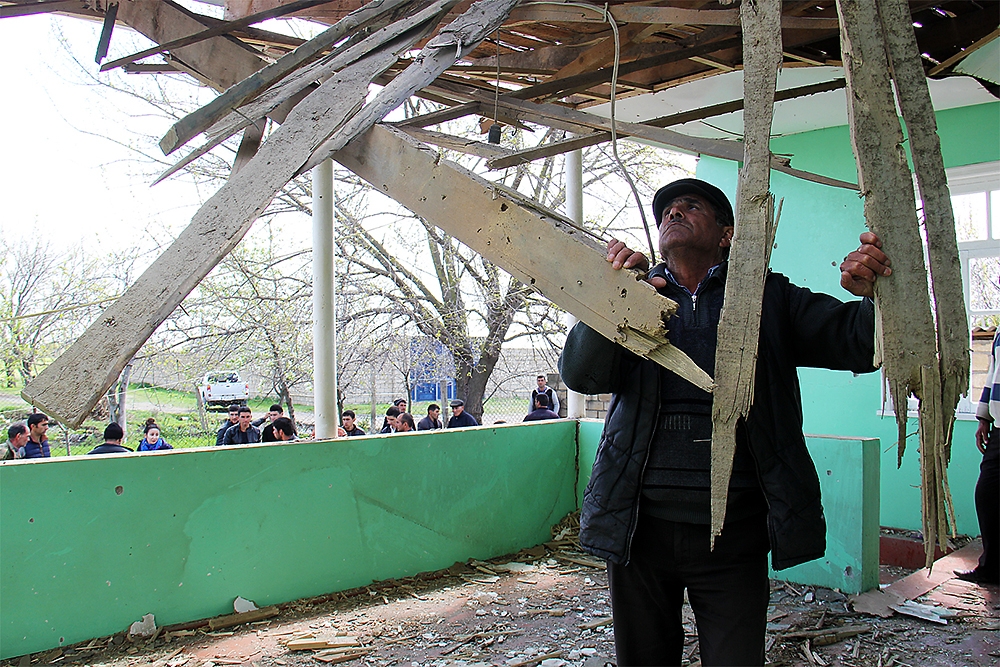 A tenuous ceasefire may still be holding in Nagorno-Karabakh, but civilians living in the conflict zone remain traumatized, with many being forced to relive painful decades-old memories of loss and displacement.

On the Azerbaijani side of the frontline, many women and children were evacuated from villages within artillery range. The male heads of households tended to remain behind to keep an eye on property.

There are no official estimates for the number of Azerbaijanis displaced by the April 2-5 fighting. Frontline villages visited by EurasiaNet.org – including Qapanly, Qaradağlı, Qaragaci, Sarijali, and Marqushevan – remained partly empty after a ceasefire was declared on April 5.

“Every time [shelling broke out], we moved our relatives to other regions, as far away as possible, depending on the situation,” said 57-year-old Novruz Aliyev, a farmer from Qaradağlı, a village located about 500 meters from an Azerbaijani army post.

Some residents said they did not flee simply because they had no other place to go. A taxi driver from the village of Sarijali in the Tartar region, an area mostly under Armenian control, said that many locals were reluctant to remain in their homes out of fear of artillery shelling. Some choose to live in their cars, parking them far outside of the village.

Sarijali is located about four to five kilometers from Armenian army positions. Early in the morning of April 5, shortly after Armenian shells damaged a few houses there, the Asadov family stuffed some belongings into a car and traveled 60 kilometers to the regional hub of Ganja, a city of about 320,000.

The experience stirred up painful memories for 61-year-old Zemfira Asadova, who was forced to leave Sarijali once before, in 1992, amid heavy fighting. She and her family returned home after a month.

“We’re used to hearing these sounds,” Asadova said, referring to the recent shelling. “But, honestly, these were the most horrifying clashes in the last 22 years.”

The April fighting marked the most intense combat since the hot phase of the Karabakh conflict, which lasted from 1988-1994. Efforts to reach a political settlement have proven fruitless since the implementation of a ceasefire agreement in 1994.

The day-to-day strains on civilians are continuing to mount, even though the guns have fallen silent.

“Seventeen people in two living rooms! Can you imagine?” said Aliyev, the Qaradağlı farmer. He was describing the living conditions at a relative’s house where his wife and four children took shelter, situated in Barda, a small town about 52 kilometers north of Qaradağlı.

Recovering from the economic damage done will take months, if not years, he added. “While villages are being shelled, how can we continue our work, or how about our animals?” Aliyev asked. “For instance, all my chickens died during the clashes this morning [April 5]. I spent time, money on them. And I lost them in one day.”

To keep an eye on his property, he himself settled in Sarijali, about four to five kilometers away from Qaradağlı, with an IDP family from Kelbajar, an Azerbaijani town that has been under Armenian control since 1993. In recent days, he has traveled back and forth between Barda, Sarijali and Qaradağlı about three to four times a day, bringing fresh meat and milk to his family’s hosts. “We do not want to bother the lives of our host families, too,” he explained. “It’s not always easy to settle in a relative’s house.”

Ilqar Musayev, deputy chair the regional Emergency Situations Commission, said so far local officials had not received requests for resettlement assistance. “If there had been even one [request], we would have solved this problem,” he said. He noted that those who fled the fighting tended to move in with relatives located a safe distance from the frontline. “Although there was not any demand, we were ready – we had places, tents for resettlement.”

The government has pledged to cover the cost of all reconstruction. It is still calculating the extent of the damage.

With the April 5 ceasefire still holding, some villagers began to return home. Some felt relieved after the tensions of the past few days. But the sight of widespread destruction offered little comfort to others.

“Let this nightmare end – whether war or peace, it is enough,” said Zemfira Asadova.