Azerbaijan comes out in favor of Yerevan protests

The charm offensive appears to be an ill-conceived effort on Baku's part to co-opt popular discontent with the leadership of Serzh Sargsyan. 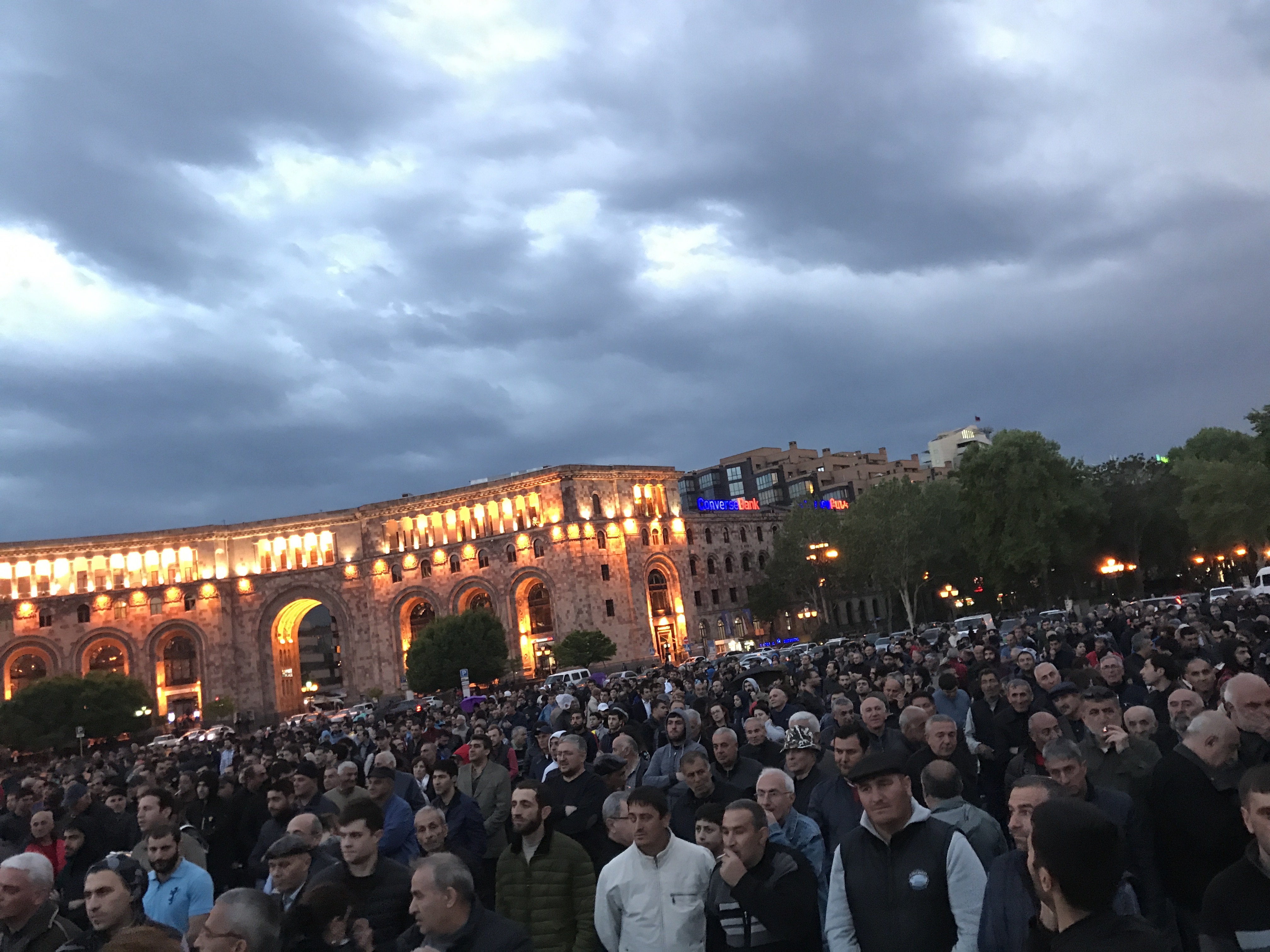 A protest rally in Yerevan on April 19. The Azerbaijani government is trying to take advantage of the anti-government sentiment in Armenia. (photo: Joshua Kucera)

The Azerbaijani government and media have come out in support of the street protests agitating against Armenian Prime Minister Serzh Sargsyan, an out-of-character endorsement of people power from the deeply authoritarian leadership in Baku.

“It was expected that the Armenian society, wishing to get rid of the so-called Karabakh clan headed by Sargsyan, will begin to act,” Azerbaijani MP Tahir Karimli told the Trend News Agency. He noted with concern that people had been detained and injured in the protests, and predicted that “participation of 100,000 people in the rally is enough to decide the fate of the government.” (The most recent rally, on the evening of April 20, had about 40,000 participants, the Associated Press estimated.)

Another MP, Elman Nasirov, suggested that people were protesting in favor of making concessions on Nagorno Karabakh, the territory controlled by Armenian forces but internationally recognized as part of Azerbaijan. "People in Armenia think that as long as Armenia continues the occupation of Azerbaijani lands, they will not have future and their situation will aggravate," Nasirov told Trend. “This way of thinking is gradually spreading in Armenia and the culprit of this situation is Serzh Sargsyan.”

The protests in Armenia have been going on for more than a week, seeking to force the deeply unpopular leader Sargsyan to step down. Protesters interviewed by Eurasianet have in fact often brought up the topic of Azerbaijan, but usually in terms of wanting their country not to emulate the stagnant politics of their eastern neighbor, where President Ilham Aliyev was recently reelected to a fourth term in office and who shows no sign of stepping down in the foreseeable future.

Protesters also have raised concerns that Azerbaijan, possibly in concert with Russia, will contrive an escalation of tensions on the line of contact with Armenian military forces in order to take advantage of the political crisis in Yerevan.

But Azerbaijani officials nevertheless saw a potential opening in the protests.

“That is exactly what we said for many years,” Hajiyev wrote. “Enemy of #Armenia/n people is the military dictatorship of Sargysian.” He also suggested that the protests represented a softening of attitudes toward Azerbaijan. “Finally #Armenia/n people understood who their real enemy.”

This is not the first time that Baku has tried to drive a wedge in between Armenian people and the Sargsyan-led government. In 2016 it set up an ill-fated “Peace Platform” of Armenians and Azerbaijanis in Baku, ostensibly working on a peaceful settlement of the conflict on the theory that Armenian people were much more interested in peace than the Armenian government.

But while Sargsyan is in fact deeply unpopular, hardline stances on Karabakh are virtually unanimous in Armenia. The Armenians involved in the Peace Platform were unknowns who advocated positions nearly unheard of in Armenia itself, and the effort collapsed. One Armenian participant who broke with the group denounced it as an invention of the Azerbaijani government.

One concerned Azerbaijan analyst recognized that Armenians may not quite see eye-to-eye with Baku, and worried that the hopes of the Armenian protesters will come to naught unless they compromise on Karabakh. “Until Armenia does not stop occupation of others’ lands and establish normal relations with its neighbors, no development should be expected in that country,” the commentator, Azer Ahmadbayli, wrote. “However, nobody dares to voice this publicly at today’s street rallies, because it is very hard for the Armenian people to admit this.”

Ahmadbayli concluded on a sympathetic note: “Azerbaijan does not gloat over problems the Armenian people face, for at least one reason – they are our closest neighbors but… they should finally open their eyes.”

It remains to be seen whether the Armenian protesters take to heart this neighborly advice.