Azerbaijan: Could Baku Have Access to a Clinton White House? 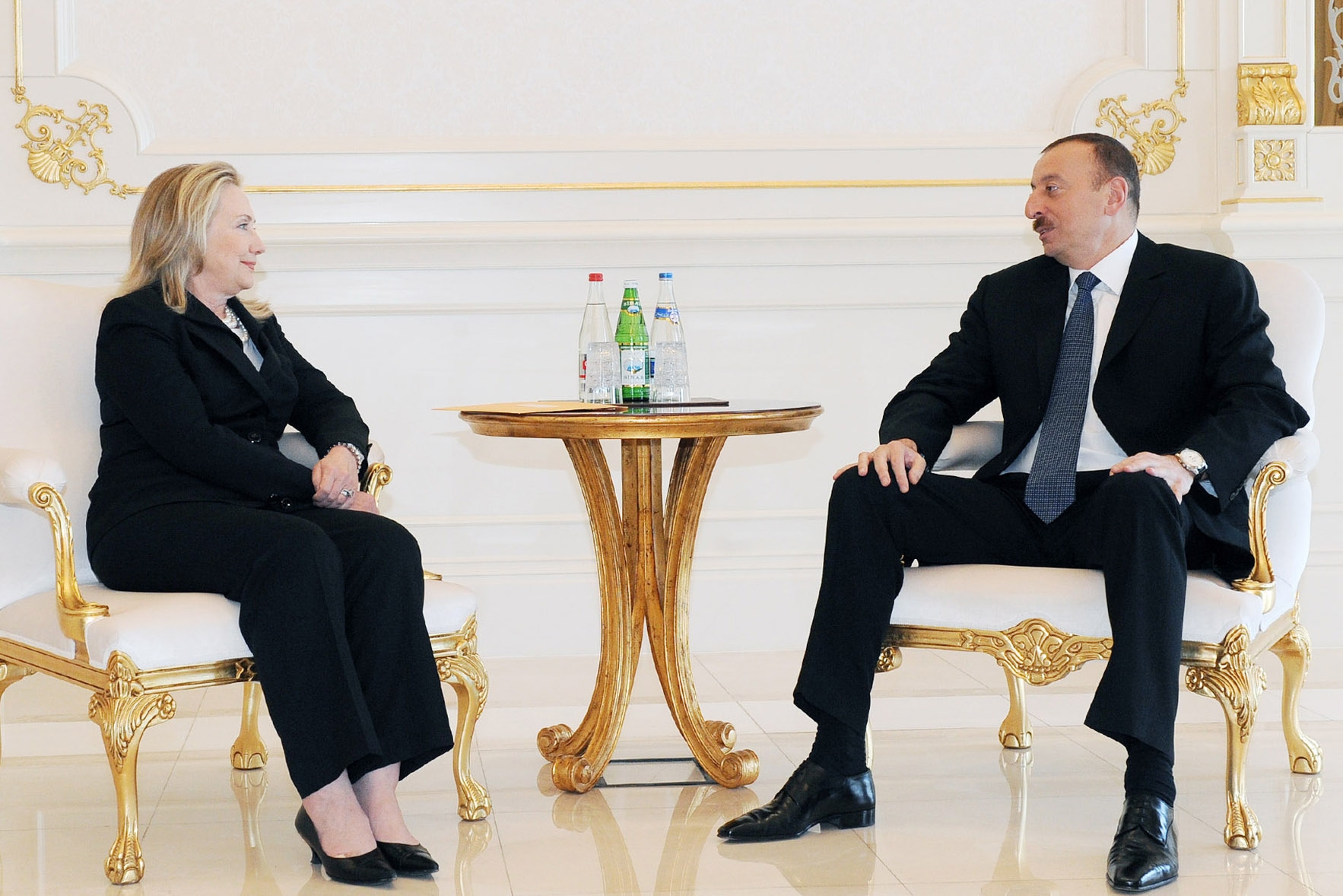 Azerbaijani President Ilham Aliyev and then US Secretary of State Hillary Clinton meet in Baku in June 2012. Some activists fear that if Clinton wins the US general election, a lobbyist connection between her presidential campaign and Azerbaijan could result in Washington de-emphasizing democratization in its dealings with Baku. (Photo: Azerbaijani Presidential Press Service)

A lobbyist connection between Hillary Clinton’s presidential campaign and Azerbaijan could create the appearance of a conflict of interest, if the democratic nominee wins the US general election on November 8.

For the past seven years, the Podesta Group, a high-powered Washington lobbying firm, has handled networking and image-building for Azerbaijan’s embassy in the United States. Azerbaijan ranks alongside Tajikistan as the third worst rights abuser in the former Soviet Union, behind Turkmenistan and Uzbekistan, according to the watchdog group Freedom House.

The Podesta Group’s chief executive officer is 73-year-old Tony Podesta, who has acted as a major fundraiser for the Clinton campaign. In addition, Podesta’s 67-year-old brother, John, serves as Clinton’s campaign chairman, and previously served as former president Bill Clinton’s chief of staff.

John Podesta co-founded the firm, but has not been directly involved in the Podesta Group since 1993. As Clinton’s campaign chairman and, potentially, a future official or adviser in a Clinton administration, he could potentially be of help in enabling Azerbaijani officials, via the Podesta Group, to gain access to White House officials, some human rights activists worry.

The end result, activists say, could be that Washington de-emphasizes democratization in its dealings with Azerbaijan. “The connection to Hillary Clinton’s campaign is worrisome,” said Rebecca Vincent, a former American diplomat who has been active in Azerbaijan human rights causes.

The Azerbaijani embassy’s current contract with the Podesta Group runs until the end of the year, according to documents obtained from the Department of Justice’s Foreign Agents Registration Act (FARA) registry. The embassy pays Podesta a monthly fee of $45,000.

Aside from encounters with senators and congressional representatives, media and non-governmental organizations, the Podesta Group has agreed to arrange meetings with “executive branch officials,” at the embassy’s request.

How much leverage it would have to take matters further with a Clinton White House is unclear.

Emails allegedly hacked from John Podesta’s account and published by WikiLeaks show that the Clinton campaign debated the propriety of accepting donations raised by lobbyists, like the Podesta Group, which do work for foreign countries. The campaign ultimately decided to accept the donations.

Emin Huseynov – the director of the Institute for Reporters’ Freedom and Safety, who spent nearly a year living in the Swiss embassy in Baku to avoid arrest – described Baku’s image-crafting efforts as highly effective. “Lobbyists like the Podesta Group are helping the Aliyev ... regime to distract international attention from the unprecedented repression taking place in the country,” he said.

Trump has not addressed Azerbaijan’s rights record. Clinton’s last public remark appears to have been in 2012, when, on a visit to the country as secretary of state, she called on the Azerbaijani government to show greater respect for freedom of expression and to release those imprisoned for expressing their opinions.

Caucasus observer Lincoln Mitchell believes that the Podesta Group would not go out on a limb to promote Azerbaijan’s interests with the new presidential administration.

“It is critical to understand that for the Podestas, their relationship with Clinton is worth much, much more than their monthly retainer from Baku. They would not jeopardize the former to help the latter,” said Mitchell, a New York-based political-development specialist. “This is not due to any moral courage, but to the reality of the dollars and cents calculations. If the Podestas lead Clinton to make a mistake with regards to Azerbaijan, they could damage their relationships and their livelihood in Washington.”

Maran Turner, executive director of Freedom Now, a Washington-based organization working to free prisoners of conscience, and other rights activists want the US government to limit contact with Baku until all political prisoners are released and Azerbaijani officials introduce meaningful democratic reforms.

Mitchell believes such an approach to be unrealistic, given that US-Azerbaijan relations are first and foremost defined by realpolitik.