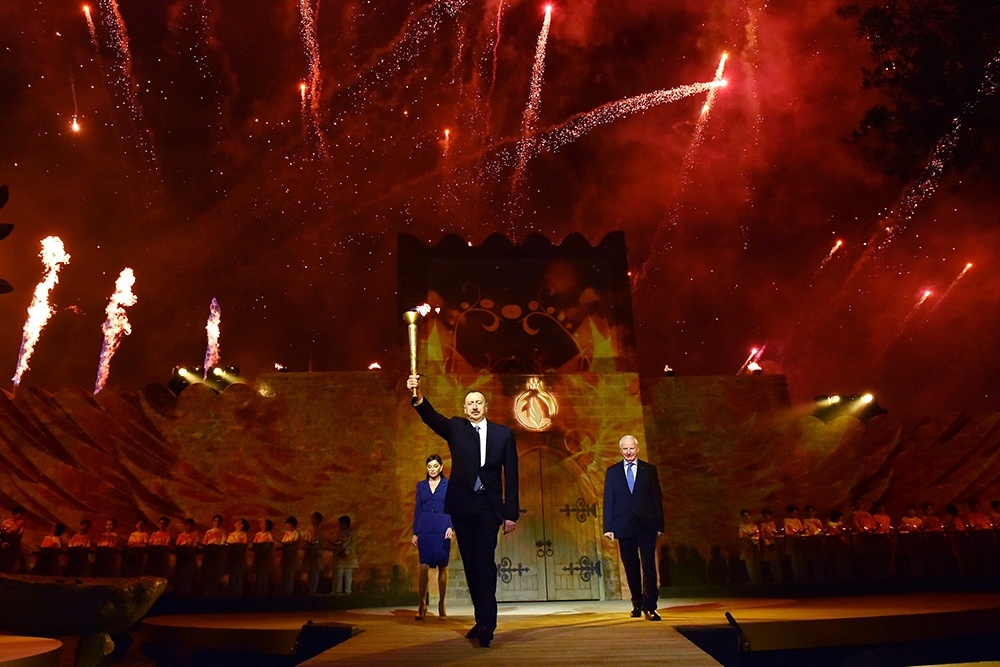 Azeri President Ilham Aliyev carries a flame on April 26 to begin the torch rally across Azerbaijan before the June 12 opening of the first European Games in Baku. The Azeri government claims it has spent roughly $962 million on the construction of five new venues for the sporting event. (Photo: Azerbaijani Presidential Press Service)

An Olympic torch has been lit in Azerbaijan; an Olympic stadium has been opened in Baku. All seems ready for the June 12 opening of the inaugural European Games, a mini-Olympics for European states. There is only one big question still hovering over the event: how will Azerbaijan pay for it all?

As the South Caucasus’ wealthiest country, energy-rich Azerbaijan did not have to worry much about paying the bills – until recently. The slump in global oil prices has put a crimp in the country’s budget. In February, authorities felt compelled to devalue its currency, the manat, by a whopping 33.5 percent against the dollar and 30 percent against the euro.

That means less cash on hand for pet projects like the European Games. Azerbaijan receives well over half of its 19.4-billion-manat ($24.7-billion) state budget from oil-and-gas revenues. Budget calculations for the Games were made at a time when oil prices stood closer to $110; Brent crude oil, the baseline for the oil-market, currently stands at about $65 per barrel.

Baku also has pledged to cover all the travel and accommodation costs for the “over 6,000 athletes” from 50 countries taking part in the June 12-28 event. Those estimated costs and others have not been made public. A spokesman for the European Games Organizing Committee, Colin Gibson, has been tight-lipped. “The budget is hard to quantify, but certainly is not the level that has been quoted in some media,” Gibson claimed.

Some outside observers estimate much higher costs than those claimed by the government.

Based on estimations of expenses since 2013, economist Rovshan Agayev at the Baku-based Center for Support for Economic Initiatives, a non-governmental think-tank, believes that roughly $3.55 billion (3.7 billion manats) for the European Games has come out of the state budget. Additional funds could have come from individual ministerial or departmental budgets, he claimed.

Some economists, who spoke on condition of anonymity, allege that the government is forcing employees at some state agencies, such as the tax ministry and State Customs Committee, to take pay cuts to meet these costs. One former Customs Committee employee told EurasiaNet.org that employees already have lost a monthly bonus, an unofficial payment that topped up mid-level officials’ salary of 670 manats ($637) per month. The reason cited, he alleged, was the European Games. The payments supposedly will resume after the Games are over, he said.

The loss amounts to 70 percent of the Customs Committee employees’ usual pay, another employee told EurasiaNet.org.

Representatives of the State Customs Committee were not available for public comment. A spokesperson for the Ministry of Taxes, however, denied that it had slashed salaries to help pay for the European Games.

Signs of financial vulnerabilities in Azerbaijan are plainly evident. During the first quarter of 2015, the Central Bank’s foreign-currency reserves declined by 31.2 percent to $9.47 billion, the Bank announced on April 24. Bank officials have excluded the possibility of another devaluation, but noted that they have spent more than $1 billion per month since December as demand for dollars increases, AzerNews reported.

That means that, with oil prices still low, the Games, coupled with other state expenses, could force the government to tap into the Oil Fund, an official piggybank for revenue from oil-and-gas projects, to cover expenses, some analysts say.

One thing seems certain: the 16-day European Games are unlikely to cover their costs.

Six hundred thousand tickets will be issued, but, at a maximum of 200 manats ($190) for the opening ceremony, they will generate scanty revenue. Attending the actual events will cost spectators no more than five manats, or $4.75 – a pricing strategy that seems designed to fill seats.

What extra financial cushion room will come from sponsorships is unknown. Rates paid by eight “official partners” and 11 “supporters/suppliers” have not been released.  “We do not disclose the commercial deals we conduct,” Gibson said.

One prominent sponsor is UNICEF, an arrangement that seems rooted more in officials’ desire to foster a positive image for Azerbaijan than reap any financial advantage. “Through this partnership, adolescents will be given a voice on how best to leverage sport in Azerbaijan for inclusion and social development,” Gibson said.

Some Azerbaijanis question the logic of spending hundreds of millions of dollars ostensibly to enhance the country’s international reputation.

Economist Agayev notes that for roughly the same amount of money, the government could have financed healthcare for five years, education for two and a half years, or repaired “all the village roads.”

One 37-year-old Baku schoolteacher who earns a maximum of 190 manats ($180.73) per month shares that skepticism. “We lost 33 percent of our savings in one night [after the devaluation]. Now, food prices are going up,” said the woman, who agreed to be identified only by her first name, Samira. “Why do we need these Games? I really cannot understand.”

The government has argued that the Games will help attract foreign investment, particularly as a host for international athletic events. Earlier this month, President Ilham Aliyev finalized an agreement to host the 2017 Islamic Solidarity Games, a sporting event for the 57 member states of the Organization of the Islamic Conference. And next year, Baku will welcome a Formula 1 auto-racing competition.

“Azerbaijan is a small country – who will use this [Olympic] stadium after the Games? We have soccer tournaments only four to five times a year and only half of the stadium will be filled,” he said. “So, these buildings will remain useless after the European Games are over.”