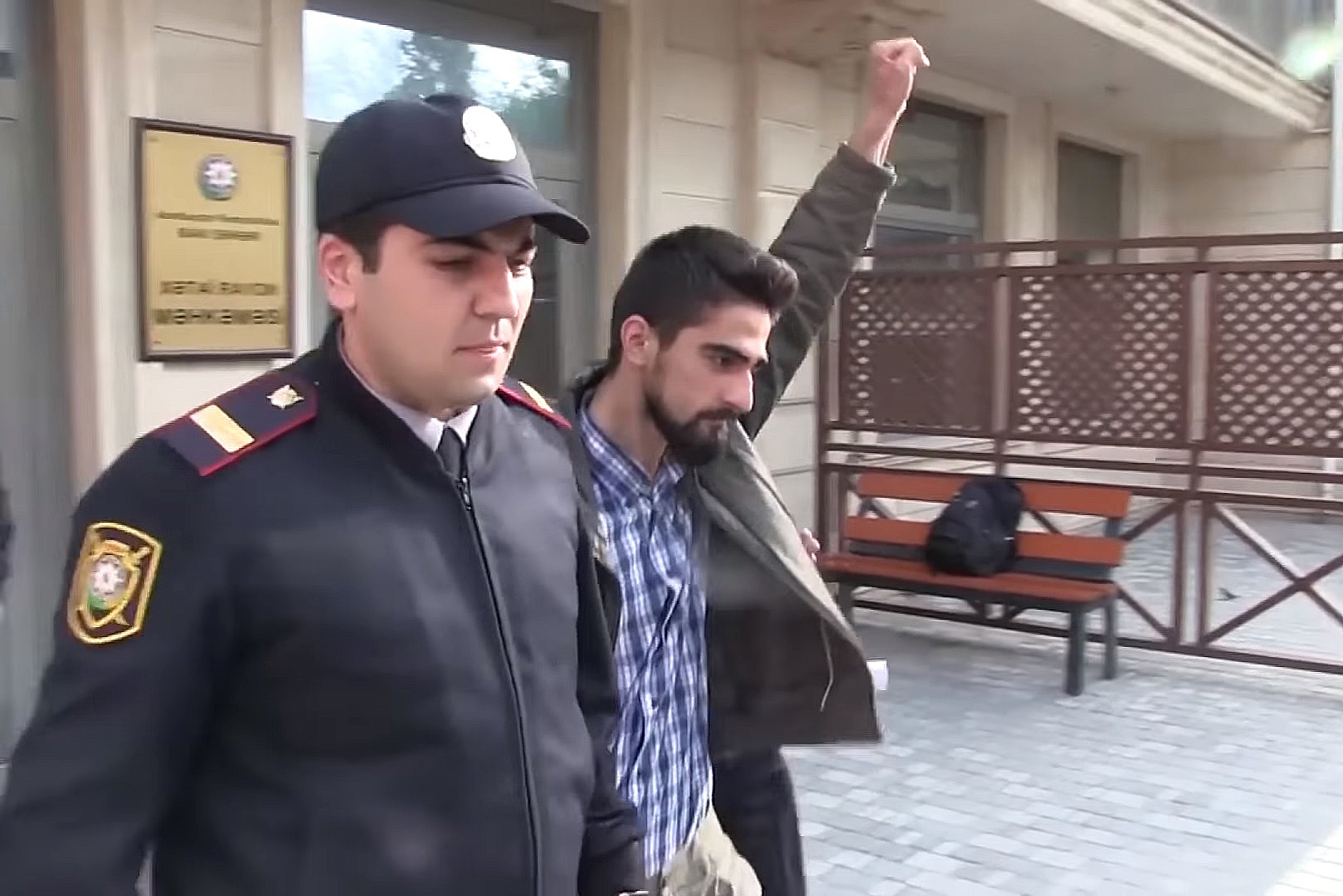 A still from Meydan TV’s footage of youth activist Qiyas Ibrahimov being escorted out of court where he stood trial for spray-painting anti-government slogans. Ibrahimov was sentenced to 10 year in jail, and Meydan TV’s website was blocked in Azerbaijan as part of authorities’ intensifying efforts to suppress dissent and control the flow of information.

Amid signs of a deepening economic crisis in Azerbaijan, authorities in Baku appear to be intensifying efforts to control the flow of information.

On May 12, an Azerbaijani court ruled in favor of the Ministry of Transport, Communications and Technology, which took action recently to block a number of independent media outlets on the grounds they were inciting unrest and seeking to undermine the government. Among the outlets targeted were Meydan TV and RFE/RL’s Azeri-language service.

Lots of questions surround the legitimacy of the court ruling. The government’s paperwork was messy, as apparent attempts to backdate documents resulted in the state “filing” complaints to the court days before offending articles were even written. The lawsuit itself was filed by what is ostensibly a unit dedicated to fighting malware and viruses.

Despite the government’s efforts, the targeted sites have still been able to reach a sizable Azerbaijani audience through mirror sites, a workaround pioneered by Chinese hackers, and most notably, Facebook – the social network Azerbaijanis use largely at the exclusion of others.

As the state presses its campaign against independent media, it is slowly ramping up its efforts to contain unwelcome speech on social media. Local media have been tracking the case of activist Mehman Galandarov, who authorities claim committed suicide in late April while in pre-trial detention. Activists have expressed public doubts about the circumstances surrounding Galadarov’s death. Some media outlets reported in early May that Galandarov was initially detained after sharing a post in support of Bayram Mammadov and Qiyas Ibrahimov, two jailed youth activists who have been critical of the current leadership.

The U.S. State Department, Amnesty International, and other watchdog groups have called for an investigation into Galandarov’s death.

On May 15, the youth activist and former political prisoner Elvin Abdullayev told the Caucasian Knot news service that he was questioned by Baku police about critical Facebook posts – again in support of Mammadov and Ibrahimov.

“People are made to understand that their activities are under control, that they can bring themselves new problems. ... It's also a message to the community – we see everything, we know everything, we follow you on Facebook – so don’t think about getting involved in politics or opposition activity,” Elshan Hasanov, the head of Center for Monitoring Political Prisoners, told Caucasian Knot.

The action to block independent media outlets is occurring amid signs of an increasingly unstable economy. The country’s biggest bank, the International Bank of Azerbaijan, missed a foreign debt payment and filed for bankruptcy protection in a US court earlier in May – despite having received a massive amount of state support. This news comes only eight weeks after Fitch, the international ratings agency, found more than one in five Azerbaijani loans to be non-performing.

The government appears determined to try to prevent a repetition of events last January, when high food prices following a devaluation of the national currency set off protests across the country. The question is whether the government’s heavy-handed response to signs of discontent can be effective over the medium- and longer-term.

Editor’s Note: Mike Runey is a Programme Officer for Eurasia at Civil Rights Defenders. He writes here in his personal capacity and the views expressed here are his own