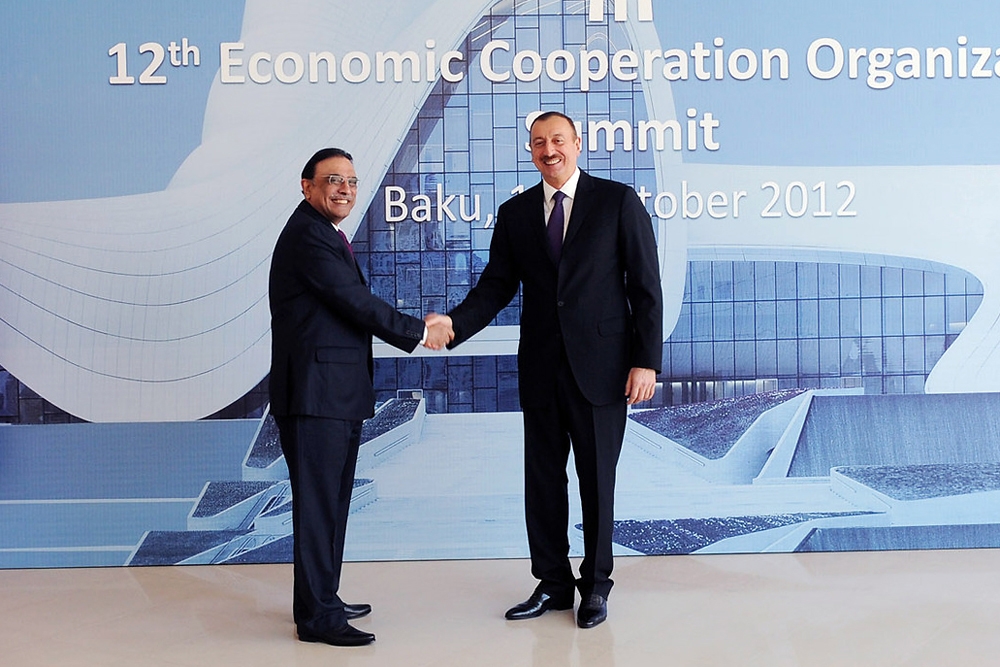 Pakistan was the second country after Turkey to recognize the independence of Azerbaijan from the Soviet Union in 1992. (Photo: Azerbaijan President Press Service)

While Turkey remains Azerbaijan’s chief strategic partner, officials in Baku are taking steps to upgrade relations with Pakistan. The diplomatic push is part of Baku’s plan to bolster its hand in its dealings over the future of Nagorno-Karabakh.

The past few months have seen lots of diplomatic contacts, with officials and experts on both sides hyping bilateral relations. At a conference in Islamabad in early May, Baku’s ambassador to Islamabad, Dashgin Shikarov, described Azerbaijan and Pakistan as “brothers.” Meanwhile, Bahar Muradova, the Azerbaijani parliament’s deputy speaker, was quoted by the state news agency AzerTag in mid-May as saying that Baku “has always felt Pakistan`s support on many issues.”

The fundamental building block of the bilateral relationship is military cooperation. The two countries signed a defense agreement in late January and naval officers subsequently held discussions on military-technical issues. In addition, Azerbaijani naval personnel participated in a Pakistani-led exercise, Aman-2013, held in March on the Arabian Sea.

Pakistan is also seen as a potential arms supplier to Baku. Over the past few years, for instance, Azerbaijan has shown interest in obtaining JF-17 aircraft, a multi-purpose combat jet developed jointly by Pakistan and China.

Attempts to broaden ties aren’t limited to the strategic sphere. In late May, Baku announced that it would offer scholarships for 36 Pakistani scholars and would set up programs at Pakistani Universities to promote a better understanding of Azerbaijan.

But officials in both countries don’t try to hide the fact that strategic expediency that is driving the two countries together: Baku wants to muster all the backing it can as it strives to recover Nagorno-Karabakh, while Pakistan feels the same about the contested territory of Kashmir.

“These are two Muslim states, having similar problems like Kashmir and Nagorno-Karabakh. They need the support of each other,” said Sarwat Rauf, a doctoral candidate who specializes on Caspian Basin affairs at Quaid-i-Azam University in Islamabad.

Both sides may sound optimistic about the strategic relationship, but at present there appears to be a significant limitation on how far it can go, specifically Azerbaijan’s strong security ties with Israel. Pakistan does not have diplomatic relations with Israel and clearly feels uncomfortable about Baku’s strategic ties to Tel Aviv. In 2012, Pakistani officials urged Azerbaijani leaders to form a formal military alliance, a gesture that some analysts interpreted as a move by Islamabad designed to undermine Azerbaijani-Israeli ties. Azerbaijan has reacted cautiously to the Pakistani offer, as it clearly wants to keep its strategic options open.

The current level of cooperation is beneficial enough for both sides, said Richard Giragosian, director of the Regional Studies Center, a Yerevan based think tank. “For Pakistan, the alliance with Azerbaijan offers a degree of recognition of Pakistan’s bid or become a more active, assertive and powerful regional actor, while conveniently responding to its rival India’s close ties to Armenia,” Giragosian said. “For Azerbaijan, Pakistan is also an important diplomatic supporter and more recently, as key military partner.”

Pakistan’s status as a nuclear power, combined with its delicate internal political balance, makes Giragosian nervous that closer Azerbaijani-Pakistani relations could cause trouble in the South Caucasus. “Given the record of criminal activity over Pakistan’s A.Q. Khan network of black market selling and sharing of nuclear weapons-related technology, there is … serious concern over proliferation in a region already troubled by Iran’s pursuit of nuclear weapons,” he said.

Jasur Sumerinli, head of the Baku-based Doktrina military-research center, downplayed the idea that stronger Azerbaijani-Pakistani security ties heightened the risk of destabilization in the Caucasus. “[Bilateral] cooperation is built with the blessing of the Western community,” he said.