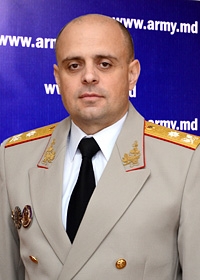 Ex-Chief of General Staff of the Moldovan Army, Iurie Dominic, sacked after an arms deal with Armenia

Armenia has bought some weapons from Moldova, and Azerbaijan is not happy about it, reports RFE/RL:

Azerbaijan has expressed serious concern over Armenia’s reported purchase from Moldova last month of rockets and other weapons worth millions of dollars, saying that it will complicate a peaceful resolution of the Nagorno-Karabakh conflict.

Elnur Aslanov, head of an analytical unit at President Ilham Aliyev’s administration, on Friday described this and other arms acquisitions by Yerevan as a “serious destabilizing factor” in the region.

“The policy on Nagorno-Karabakh pursued by Armenia testifies to the destructive position of that state in the region,” Russian and Azerbaijani news agencies quoted him as telling journalists in Baku. “Any arms acquisition, any increase in the number of weapons in the region certainly does not lay the groundwork for establishing peace and stability and, on the contrary, impedes that.”

That's pretty rich, given that, as RFE/RL notes, "[Azerbaijan] plans to boost military spending to $3.3 billion this year, up from $2.15 [billion] a year ago. By comparison, Armenia’s defense budget for 2011 is projected to reach only $400 million." Some of the headlines in my RSS feed over the past month: "Azerbaijani Armed Forces to receive 60 new UAVs by the end of 2011," "Turkey to give military support Azerbaijan, says minister", "Armenia sees no problem in S-300 sale to Azerbaijan."

Nevertheless, there does seem to be quite a bit of shadiness to the deal. For one, the flight carrying the arms to Armenia originated in Benghazi, Libya before stopping in Chisinau on the way to Armenia. The Moldovan parliament has held hearings on the deal, and Moldova's president dismissed the chief of staff of the army possibly because of the deal (or possibly not). A Latvian company alleged to be the middleman has denied any involvement. And in Armenia, there are claims that the arms were "useless" and out of date. But information is still murky on this, and the story is certain to be continued...