The government is again registering new political parties and saying it wants pluralism. But the parties who are cooperating are being mocked as “bus opposition.” 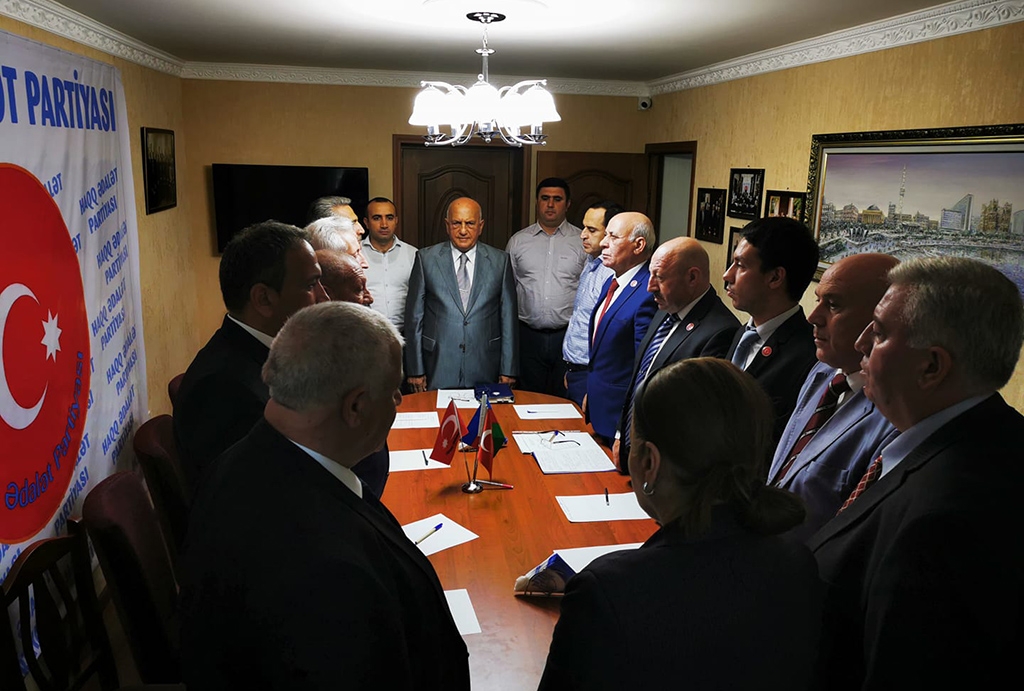 A recent meeting of the Party of Law and Justice, chaired by Ali Insanov. (Facebook)

Until last year, Azerbaijan’s Ministry of Justice hadn’t registered any new political parties since 2011. But in 2020 it registered seven new parties, and on October 21, two more.

One of the newly registered parties is the Azerbaijan Rising Party, founded only last year and barely active; the last statement on their website is from December 2020 (condemning United States sanctions against Turkey) and they have 50 Twitter followers. The other is the Party of Law and Justice, chaired by Ali Insanov, a former minister of health who spent 14 years in prison on corruption and assault charges before being pardoned in 2019.

The official recognition of Insanov’s party especially raised eyebrows, as he had a reputation as one of the loudest and uncompromising critics of the Azerbaijani government.

But the embrace of new parties, including those led by figures like Insanov, appears to be part of a broader policy that the government calls a “dialogue” with the opposition.

The dialogue has been on display at events like an October 21 meeting at the headquarters of the ruling New Azerbaijan Party, the theme of which was “Magnificent Symbol of the President-People-Army Unity.”

At another meeting in September, leaders of 45 political parties gathered at the Presidential Administration. Among the parties represented were plenty known for their longtime loyalty to the government, which has been ruled virtually singlehandedly by President Ilham Aliyev, and before him his father Heydar Aliyev, for nearly three decades. The Aliyevs have ruled through the vehicle of their New Azerbaijan Party, along with a constellation of other minor parties who entirely support the ruling regime.

But other parties participating in the dialogue are those who until recently were outspoken and consistent in their criticism of the government, like former member of parliament and chairman of the Hope Party Iqbal Agazade, and the formerly imprisoned chairman of the Republican Alternative (ReAl) Party, Ilgar Mammadov.

Agazade explained his participation by arguing that in a dialogue, the opposing sides take steps to “soften the relations,” he said in an interview with BBC Azerbaijani. “It is better to have an exchange of ideas across a table than stand far away from each other and fight.”

Nevertheless, Agazade added that he isn’t confident that the government will remain interested in the effort. “In the past there were also attempts to have a dialogue, and then the government stepped back,” he said. “Now too there can be a time that it might recede, or it might move forward and the process could deepen.”

The victory in last year’s war over Armenia has provided additional platforms to coopt the opposition. Since then, the government has held a steady stream of field trips to the territories that Azerbaijan took back in the war, and friendly party leaders, analysts, journalists and civic activists are invited along. On October 7, the government took party leaders on a bus trip to Shusha, the biggest prize of the war and Azerbaijan’s newly designated cultural capital.

People not connected to the government, meanwhile, still don’t have access to Shusha, and the highly choreographed trips have become the source of mockery, with those participating in them ridiculed as “bus opposition.”

The “dialogue” initiative was launched in the aftermath of snap parliamentary elections in 2020, in which the government raised expectations of a genuine political opening only to, in the end, rely on the same hardline tactics that have kept the ruling regime in power for nearly three decades.

The dialogue has been led by Adalat Valiyev, the head of a new body under the Presidential Administration, the Department of Relations with Political Parties and the Legislature.

Valiyev moderates meetings with party leaders and conducts the field trips to Karabakh. In the opening remarks to the September meeting, he specified that these sorts of events are held at Aliyev’s instructions and that the results are analyzed and taken into consideration in government decision making. He said that because of the dialogue process, 22 parties have been provided with offices and that party leaders are regularly invited to be interviewed on television and other media.

But the extent of the dialogue is limited.

In March 2020, in an address to parliament, Aliyev mentioned that he was “constantly briefed” on Valiyev’s meetings with party leaders and the process was being conducted “without putting prior terms and conditions” on the participants.

“And still, the marginalized group that lost all its foundations refused to come to these meetings,” Aliyev said in an apparent reference to the more intransigent opposition forces like the Popular Front Party of Azerbaijan (PFPA) and Musavat. “It is their choice – in any case we are not going to be on the losing side,” Aliyev added.

In response, the chair of the PFPA, Ali Karimli, said that his own party did have conditions to take part in the dialogue, namely that sensitive issues be part of the agenda: “the release of political prisoners, ensuring the right to free assembly, and election reforms,” he wrote in a Facebook post. Karimli said that when the dialogue first started last year, his party was invited but refused to take part. More recently, he said, they are not even invited.

While some parties are being welcomed into the fold, others have been trying for years to get registered, still with no results. The head of the Azerbaijan Socialist Party, Elshan Hasanov, said he has been trying since founding the party 21 years ago. But every time, he is rejected “on the pretext of missing some documents,” he told RFE/RL.

He said that when the dialogue process began, he tried to join, and was invited for an initial meeting with government officials. But “during the meeting they saw that I’m not someone they can just put on a bus and take to Shusha,” he said.

Another group, the Azerbaijan Democracy and Welfare Movement, held a convention in October and declared itself a political party. The party is currently putting together the paperwork to apply for official state registration, its chairman, economist Gubad Ibadoglu, told Eurasianet.

But the party considers the dialogue process to be “an attempt to control political parties from one power,” Ibadoglu said. “The government’s dialogue damaged the political landscape in the country and those who are involved in this also are losing credibility in the eyes of the public. So we decided not to join,” he said.

Other parties, though, are being tempted by various incentives to join the dialogues. Those include government funding, an office, and if the government goes through with mooted plans to implement a proportional electoral system for parliament seats, at least a nominal position of power. “Only those parties registered by the state will be able to run for parliament,” journalist and analyst Rauf Mirgadirov told Eurasianet.

All of this raises the question: in such a tightly controlled political system, when the ruling regime governs completely unchecked, why does the government need even the appearance of an opposition?

"The worsening socio-economic situation in the country, along with damaged relations with western institutions, created the need for this,” analyst Najmin Kamilsoy told Eurasianet. Large opposition demonstrations in January and August 2019 spooked the government, and convinced officials to try to coopt some of the country’s opposition forces, he said. “But there is still no tolerance of political activity by ordinary people who oppose the ruling class.”

He noted that no opposition demonstration has been allowed in the country in three years, and no real political liberalization has taken place since the dialogue process began.

“And those who refuse to join this [dialogue process] remain targets and continue to be weakened by repressions,” Kamilsoy said.